Pope: man needs faith and reason to realize his aim to become similar to God 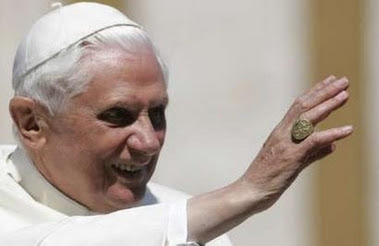 In his illustration of the figure of Clement of Alexandria, Benedict XVI affirms that faith is the true philosophy, “the true knowledge of the road to take in our life’s journey”, but that in order to contemplate God “the practise of virtues” that is good deeds, are also needed. The Pope blesses the torch for the “John Paul II” pilgrimage of peace, which will take place from Bethlehem to Jerusalem.
Vatican city (AsiaNews) – “Man is called to become like God” and he has “the complementary wings of faith and reason” in order to reach that truth, which is Jesus Christ. Benedict XVI returned once again to a familiar and dear theme today, illustrating the figure of Clement of Alexandria, “Master of dialogue between faith and reason” in the second century, to over 45 thousand people present in St Peter’s square for the general audience.
In a sunbathed square, still dressed in flowers from birthday celebrations, on the eve of the second anniversary of his election – provoking the Pope to observe a “festive climate” - the Pontiff sustained that the one true philosophy is faith, “true knowledge of the road to take in life”.
Illustrating Clement Alexandria’s works which “accompany the baptised catechumen’s journey step by step”, Benedict XVI attributed him with having “rebuilt” the second great occasion for dialogue between Christianity and Greek philosophy, after the first occasion, conducted by Paul “failed in may ways”.
In his thoughts, reason leads to knowledge, in Greek gnosi, but only Knowledge of the truth which is Christ Jesus, is real knowledge: “authentic gnosi is a development of the faith within the soul that he has converted”. But “knowledge of Christ is not just a thought, it is also love which opens the eyes and transforms man and creates union with Logos”, which is God. This is how contemplation is reached. But in order to arrive at the contemplation of God “the practice of virtues” are also needed; intellectual knowledge is not enough: in the journey towards perfection clement “gives as muck importance to moral requirements as to intellectual ones” and as a result “good deeds must accompany one on one’s life journey, just as a shadow follows the body: they are never separate, true gnosi cannot coexist with evil deeds”.
According to Clement the heart of a “true gnostic” contains two virtues: “freedom from passions” and love which “assure an intimate union with God and with contemplation”. “Love – continued the Pope – gifts perfect peace, and enables the true gnostic to face even the greatest of sacrifices, even the supreme sacrifice, and thus helps him on step by step towards the heights of virtues. Thus the ideal of ancient philosophy, that is the freedom from ones passions, is redefined by Clement and joined together with love, in the man’s constant journey to liken himself to God, which represents the journey of knowledge of true gnosi”.
Thus, in the Pope’s words, we come to what Clement defines as man’s primary aim: “to liken himself to God” and this “is possible thanks, because we are made in the likeness of God” in the moment of creation.
At the end of the audience Pope Benedict XVI blessed the “John Paul II” torch of peace which will be carried from Bethlehem to Jerusalem in a marathon-pilgrimage on April 23to 28th. Palestinian and Israeli students will join the IV edition of the run along with 200 Italian students from across Italy.
at April 18, 2007