Liturgy Office Clamp Down on Blogosphere 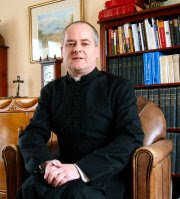 Fr Tim Finigan received this letter from Washington demanding he remove the copy of the new translations of the Mass he published on "The Hermeneutic of Continuity".

I would have thought that anyone in the Church in the USA would realise the great dangers of doing things behind closed doors and excluding the vast majority of clergy and the laity, especially after the sex abuse scandals and cover-ups that have torn the Church there apart. Mr Finn says that these translations should only be introduced with "sufficient catechetical material". Frankly, the texts themselves seem to be sufficient to teach people the superiority of the new translations of the theolgically barren, inelegant translations we use now.

Anyhow Fr Tim has taken his "mirroring", as he calls it, down but someone else seems to have been blogging around those who might be interested and has put the text up, judge for yourself at http://newmasstexts.blogspot.com/ , I think I was visitor number "7".

You could email Mr Finn who supplies his email address on his letter to Fr Tim.

The Americans have a awful penchant for cover-up, Watergate, Sex Abuse, as you say, the killing of British troops in Iraq and now the liturgy.
Didn't some American Bishop say that Americans couldn't understand the notion of "dew". Wow!

I hadn't got round to reading the new translations. Now l definitely will. Thanks Peter Finn for drawing it to our attention and reminding us of that old advertising adage about bad publicity.. I say, he must be terribly important with such a long job title.

Let's be fair - just becuase the letter came from Washington, that doens't necessarily mean that it's the US that was behind it.

Given that Bishop Roche and Mgr Harbert are both English (and the E and W bishops just happen to be meeting this week), we can guess how pleased they all were about the issue of the text they'd rather keep under wraps for as long as possible. Is it not just as likely that the order to issue the letter came from them? After all, they've probably got their experts at Eccleston Square spending lots of their time and our money on writing what they deem to be suitable catechetical material to support the eventual issue of the new, self-explanatory, texts.

In any event, Fr Tim is to be congratulated for his repsonse and so is Fr Blake (and other priests of the same ilk) who have posted the text on their websites. Thanks to you all.

You know what, I was able to read almost every word of that (speaking English as I have from almost my first words! - before that I gurgled alot and threw up occasionally) without having to use a dictionary.

It kind of makes one think that perhaps the ICEL would like to keep this under wraps for as long as possible, or something. Maybe there's an AGENDA there? Don't really approve of this kind of formalism?

Fortunately I don't take my cues from people like ICEL, so at mass I already loudly answer with "And with THY spirit", say "I Believe..." in the creed, and usually make the preface responses and others in Latin, whatever the language of the mass I'm attending. It just saves confusion, and keeps me from contributing to the already abysmal standard of American Catholic worship.

I heard a story the other day, about the first folk mass celebrated in my diocese. The woman who as a 16 year-old girl attended it told of how she and her class were taken as a group to "something special" at the cathedral. At the door nuns collected everyone's traditional missal and mantilla, never to return, though they weren't told that at the time (and hand missals weren't cheap and still aren't!), but she wouldn't give hers up. The nun tried to force it from her, literally pulling on it saying, "Give me that missal!", but my friend held onto it tenaciously. Finally the nun gave up, and my friend recounted being told to come up and surround the altar, the singing of vernacular folk music, etc. She was refused communion kneeling. She said, and I quote, "I felt as if I was being raped."

The abuse by the church in the United States isn't confined to pederasty. At least one generation has been psychologically traumatised and distinctly violated, and that violent trauma is being perpetuated by the very people who perpetuate that legacy under the guise of ICEL. Just check their attitued in this case.

Few things can be more a matter of public interest than the liturgy and the process of developing new texts should be as open as it is possible to make it.

However, the fact that it is being done in a cupboard, or perhaps a bunker, demonstrates the political character of vernacular language and used by ruling groups to assert their power.

In other words this row shows yet again the wisdom of using a "dead" language for public worship.

Poor Mr. Finn! He doesn't realize that the new translation is already being used in the U.S., and that with the tacit or verbal permission of not a few American bishops! At least one bishop invited his priests to explain the new texts to the people and begin using them at daily Mass.

Of course, certain folks in the American Catholic bureaucracy in Washington have a vested interest in delaying the publication of the new texts for as long as possible. For some time, the dying liberal liturgical establishment has been plotting to sabotage the introduction of the new translations, claiming that "pastoral sensitivity" will justify the continued use of the old ICEL texts.

Oh, yes . . . the "dew" question. Will there be a pastoral letter of the U.S. Bishops on dew? Everyone knows that Americans are unfamiliar with dew. Such a curious foreign notion!

Is it true that theses are being written in a certain American theological faculty on "The Symbological Incompatibilty of Dew with Contemporary Feminist Ritual" and "Dew: a Threat to Social Justice"?

It strikes me that the Inquisition could have learned lessons from ICEL in enforcing ideology.

Much ado about nothing. There is no need to be alarmed by the weakness of these new texts. After all, they are only suggestions for the celebrant and congregation. They will only encourage priests to improvise as they are already doing. And many of us will keep the old books and use them.