Where do we stop? 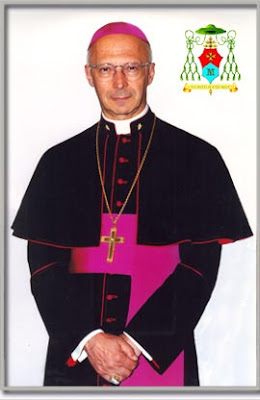 The new head of the Italian bishops conference has made political waves by asking on what basis may incest and pedophilia be denied if Italy legalizes same-sex unions and other alternatives to the family.
Archbishop Angelo Bagnasco of Genoa, who was appointed last month to lead the Italian Bishops Conference, is spearheading efforts of the Catholic Church in Italy against legislation giving unmarried unions - including same-sex ones - legal status and benefits.
"Why say 'no' to forms of legally recognised co-habitation which create alternatives to the family? Why say 'no' to incest?" the Archbishop said at a meeting of Church workers, according to the Italian journal, La Repubblica.
"Why say 'no' to the pedophile party in Holland?" Bagnasco stated, referring to the Dutch Brotherly Love, Freedom and Diversity party, which lobbies to reduce the age of consent from 16 to 12 and legalize child pornography.
at April 03, 2007

I've already had a young man tell me that he couldn't see anything wrong with incest - "provided you make sure that there are no children". You are right to ask where it will stop.

I am concerned about the sexulisation of children younger and younger, again the question is where do we stop?

It seems to me ridiculous to link the two. There is a difference between what is abusive and what is consensual. "Gay marriage" is consensual. Mostly the call arises as a way of dealing with unjust and unfair property (pensions and tenancy) and inheritance rights, which ought to be dealt with anyway. If this was done, the whole idea of "gay marriage" would be quite pointless.

Greed and selfishness seems to be the order of the day now.Fiddling and plundering from defenceless individuals,chucking the old folk into diabolical care-homes is looked upon as normal behaviour.The 10 commandments seem to stand for nothing.Organised religion is seen as a hindrance by the warped,greedy individuals who run our society,the norms of the human race going back thousands of years are being worn away.

Henry,
As a Brighton Med student I saw branding, mutilation, piercing and other forms of sado masochism, which you could say were consensual but as any Catholic knows when we consent, that consent is not always done with full knowledge and absolute freedom, though that is the claim. I imagine the same is said of inces, it is invariably the claim of pediarasts.

I think he might have chosen slightly extreme, and therefore rhetorically less useful, examples. The vast majority, religious or not, are against incest and paedophilia.

However he could have asked why they would not next accept polygamy. At the moment there is nothing unlawful about a man (or woman) living with and sleeping with more than one partner: it only becomes unlawful if they were to marry. Now most people are against polygamy but they would have a hard time justifying that in logic if they are prepared to allow multi-partner relationships to exist outside marriage.

The good Archbishop is right, but I feel he needs to use examples that people can more easily relate to.

Jack - paedophilia is always coercive and abusive as the other party involved is by definition a minor. And all too often, as you will know, it takes place within the family.

As regards other harmful and self-harmful actions eg those you saw as a medical student, there may indeed be an element of coercion, but you can and should say the same thing about the other forms of self-harm and other-harm whose effects, far more widespread, you will also have encounterd as a medical practitioner: drug abuse, not excluding alcohol, food abuse, tobacco use, war, and road traffic accidents. Has the Archbishop ever criticised Italian driving, I wonder? Does he smoke?

A couple of chaps setting up home together is surely a minor evil in this overall scheme of things?