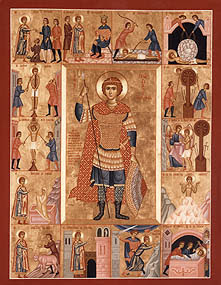 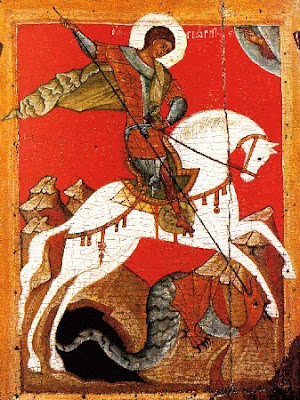 There seem to be two distinct Georgian traditions, George and the dragon and George, the Great Martyr.
In the first George overcomes the dragon who seeks to destroy the virgin, who eventually leads the dragon cative, and in the second George overcomes a multitude of the most gruesome of tortures and eventually death.
The two stories can be reconciled if one sees the dragon as being death, the destoyer of the innocent, George like all the martyrs wrestles with it and eventually overcomes it, and hands power over it to the innocent virgin, the Church.
Death's power is destroyed by the Holy Martyr.
HOLY GEORGE PRAY FOR US, AND FOR ENGLAND.
BY YOUR GLORIOUS TRIUMPH DEFEAT THE CULTURE OF DEATH IN OUR LAND.
at April 23, 2007

Holy Martyr of England also pray for the end of the death of culture in this land.
Ora pro Nobis

What beautiful icons of the Great-Martyr!