Nuncio: Rome More Interested in the Net Than His Terna 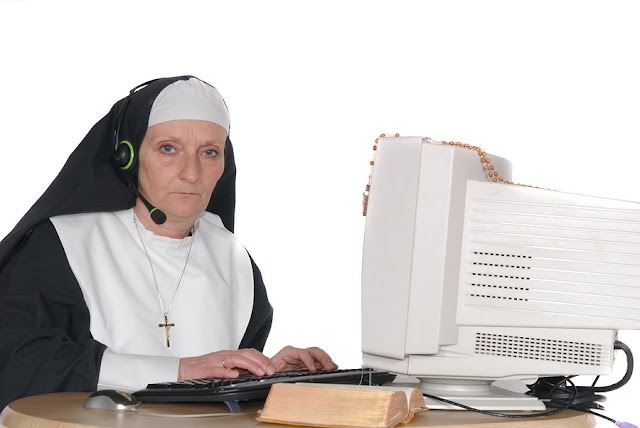 Archbishop Faustino Sainz Muñoz, the Apostolic Nuncio has given an interview to The Tablet, apparently. Why a faithful servant of the Church should not choose a mainstream Catholic journal or newspaper but prefer to give cudos to a fanzine which sets itself the task of opposing every thought, word and deed of the Holy Father, whilst pushing its own relativistic liberal agenda, I am not sure. Apparently in the interview he says Rome, now, seems to take more interest in the internet than in a "Ternas" submitted by him.


Obviously Rome has learnt from the Williamson debacle but also learnt that the news and views of epicopabili are online, and readily available to the various Roman dicasteries but also to the media, and actually to individual members of the faithful, a whiff of scandal once on-line is there forever. Recent episcopal appointments in the States indicate Rome tends to appoint priests who have a positive and strong, paper and internet trail behind them, for the most part they have either worked in Rome or have been military chaplains, where their careers are heavily documented.

I don't think Rome takes much interest in priest bloggers, (except Fr Zed of course, I notice he has copied this story) though we all have regular Vatican visitors, we tend not to get involved in personal criticism but I am sure it is fascinated by what on-line newspapers have to say and I am sure someone trawls through pastoral letters on diocesan websites. One blog that does have influence is Damian Thompson's, though I feel for anyone who is thrown into the bear pit of his readers. There is a rumour that Damian's unrelenting ridicule of his pastoral ineptitude cost one ecclesiastic preferment to a high position. Today he has a very beautiful post about the meeting of faith and beauty at the Oratory Carol service. He always writes beautifully about music.
at December 24, 2009

Dr Thompson can write very eloquently although some of his readers reflect very accurately the spirit of Pius IX and the Syllabus of Errors rather than that of Vatican II, nor is the blatant anti-semitism of one thread of traditional Catholicism, repudiated of course by the present Pope, absent. Fortunately Dr Thompson himself takes a firm line against such evil nonsense.

Bear pit? Maybe. Commenters speak their mind (sometimes that's a matter of embarrassment) and elbows are used, but a surprisingly wide range of views are aired, and I've seen regular champions of orthodoxy criticised by others for rudeness or lack of sensitivity (even DT himself).

The thing is, it's good to have a Catholic columnist who's willing to offend the friends of the cosy consensus that has done so much harm to the Church in these islands, and that's bound to attract strong words in the comments box, for and agin.

If any nuncio complains that Rome takes more notice of the internet than terna's sumbitted by himself then he must ask himself - why?

As a regular bear in Dr Thompson's bear-pit, I agree that the atmosphere can be a little histrionic, but I have personally found it very refreshing to find people willing to discuss the issues that affect our pew-fodder experience of Catholicism (it was liberating to find that I'm not the only person in Britain that often finds modern liturgical notice trite and patronising). I have often found myself grateful to some of the more crackpot posters, who have forced me back to look at Church documents or the Greek New Testament.
I do, however, wish that Dr Thompson would be a little quicker and a little more thorough in rooting out the anti-Semites, as they have lately made his blog unreadable.
All that said, Fr Blake's blog is certainly the most nourishing blog to read and leads me to think that the people of Brighton are jolly lucky to have him.
Merry Christmas
Thomas

There is a post by james preece on his blog re the tablets interview recently with vin nicolls, only 25% approx of the vin's actual words were used the other 75% were lena curtis.The same may well be true of this latest interview. One thing for sure the Tablistas had no say in the appointment of the co-adjutor of Shrewsbury thanks be to God.

Merry Chistmas Fr Blake, may I join with The Raven in saying how lucky the people of your parish, and indeed those who read your blog,are in having a priest who makes them think?

This looks suspiciously like my PP. In which case, we're all in serious trouble !!!

God help anyone who is the recipient of riducule from Damian Thompson's blog. 'Independent' has it spot on when he says that the contributor reflect the spirit of Pius IX. Some contributors seem to share an overriding sense of bitterness, and in some cases, contempt for the teacings of the Church, and the autority of the bishops, which are not in accordance with their own views.

There is no doubt that Thompson is a brilliant writer. When he deals with real issues he is excellent. All too often though the blog publicises petty greviences against bishops. I felt his reporting of a meeting with Cardinal Murphy-O'Connor in Westminster Cathedral some months ago was particularly petty. He seemed almost to glory in the fact that he called the Cardinal 'Father', as well as making some sort of reference to Father Ted was particularly nasty.