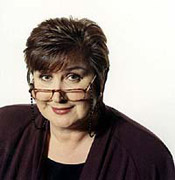 By Hilary White LONDON, August 15, 2006 (LifeSiteNews.com) – This week, a popular BBC radio announcer told the public that she had entered into a “suicide pact” with friends should she be incapacitated by illness. Jenni Murray, the presenter of BBC Radio 4's Woman's Hour, a feminist and euthanasia advocate, said that she does not want to be “trapped” into caring for her mother who is ill with Parkinson’s disease. Murray, a member of the Order of the British Empire and a patron of the Family Planning Association, is airing her views tonight on a BBC television program called “Don’t Get Me Started.” Publicity material for the show says that Murray “plans to end her own life when she becomes a burden to those around her.” She discusses methods, including smothering with a pillow or injecting with drugs, with two friends, The network said: "Jenni is angry that, having fought so hard to become liberated and independent, women are now being trapped into caring for dependent parents." Murray complains that the law against assisted suicide is supported by a “religious minority” who hold to an outdated moral view that human life is inherently valuable and that children have a legitimate obligation to care for elderly parents. The program highlights the growth, especially in Britain, of the idea of an “obligation to die.” Most leading thinkers in the bioethics field endorse euthanasia and assisted suicide and often argue that elderly and ill patients have the obligation to end their lives to relieve pressure on families and the health care system. In 2004, Baroness Mary Warnock, Britain’s leader in bioethics, said unequivocally that the ill and elderly had an obligation to die as soon as possible so as not to burden relatives and the medical system. Baroness Warnock, called Britain's “Philosopher Queen”, said in an interview, “In other contexts sacrificing oneself for one's family would be considered good. I don't see what is so horrible about the motive of not wanting to be an increasing nuisance.” She said, “I am not ashamed to say some lives are more worth living than others.” UK's "Philosopher Queen," Warnock Says Elderly and Ill have Obligation to Suicide.

Email ThisBlogThis!Share to TwitterShare to FacebookShare to Pinterest
Labels: Secualrism

This is a sad reflection of our times, Father. I have had a few conversations with others who don't want to be a "burden" when they fall critically ill or are unable to be self-sufficient. It is sad because it is a rejection of our inate dignity as children of God, saying, "No, my life now has no value!" It is a shame that someone with such virulent views geared towards the 'Culture of Death' should be given so much air time. The feelings that people experience when they lose their independence are understandable, but who in their right mind would ask anyone to be accomplice in their suicide?

Life and death and death are always in a battle. The culture of life ultimates defeat culture of death in the resurrection and in the Mass.