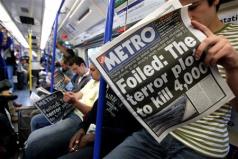 Britain named 19 people on Friday suspected of a plot to blow up transatlantic airliners a day after police said they had foiled "murder on an unimaginable scale". Full Article Video

Having coffee this morning, sitting around the kitchen table, subjects came in and went out obliquely. Someone raised the foiled terror plot. The dreadful thing is most of us were rather skeptical about it all. We have heard about weapons of mass destruction which could be deployed in 45mins, early morning raids on houses which yielded nothing, the shooting of young Portugese. We have seen tanks around Heathrow, we know about the rather wicked manipulation of the media, the use of the occassional royal funeral to release bad news. We have become skeptical, we have stopped trusting our government.

Christians are by nature skeptical, not just because we do not like believing that people could be so evil as to blow up a plane full of people but also because Christianity tends to make us sift the material people give us, seperating wheat from chaff, lies from truth. Somehow, maybe because at the heart of our faith is Jesus, the Truth we demand verification.