WE BEHELD HIS GLORY: This weekend we celebrate the Feast of the Transfiguration 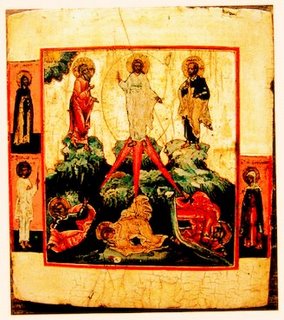 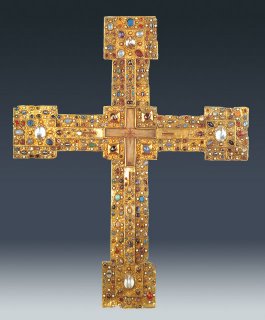 The icon of the Holy Meatamorphosis, or Transfiguration illustrates the strange events that happened when the Lord Jesus takes Peter, James and John up a mountain there the Lord is metamorphosised, shining with Glory, on either side of him appear Moses and Elisha who speak of his Passion. The disciples are covered with confusion. After this event Jesus himself repeated speaks of his Passion, the disciples are still confused, indeed they only understand at Penetecost.

This great 11th century cross contains relics of the True Cross, it shows the "Glory" of the Cross.
In the first millenium there are no bloody, broken corpses; the Cross is about Triumph. There is no denial of suffering, Christians of the first millenium seem as, if not even more knowledgeable of the scriptures and the Christian tradition, than those of the second. Christ is the one who takes on human suffering, including the seperation of death, and he metamorphosises it.

When we speak of the Mass as being the re-presentaion of Calvary as Saint Thomas Aquinas does, we can understand him only if we take onboard the imagery of "Glory" of those who preceeded him rather than the imagery of human misery of those who followed him.

For the Apostles after Penetecost, and the Church of the First Millenium, Death, Cross, Suffering, Ressurrection and Ascension too are one event.
at August 04, 2006