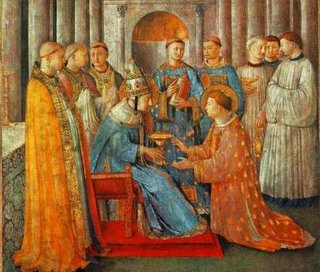 St Sixtus is pictured here ordaining Laurence to the diaconate.
Pope St Sixtus, pope for less than year was killed in the persecution by the Empeeror Valerian in the year 256 with many clergy of the Church of Rome. Feast: 7 August.
Laurence was spared and sent to collect the wealth of Church of Rome. Three days later he returned to the Emperor and cried out, "Behold, O Emperor, the true treasure of the Church of the city of Rome". Laurence had brought the poor of the city who the Church had cared for. Valerian not best please had Laurence tortured and finally roasted alive on a gridiron. Feast: 10th August.