POPE: SUFFERING AND DEATH ARE STILL A MYSTERY DESPITE SCIENCE(AGI) 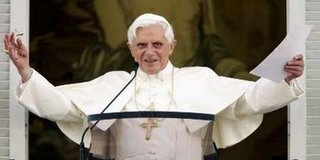 - Castel Gandolfo, Aug 16 - The great breakthroughs in technology and science have significantly improved the conditions of the human race, but they still "fail to resolve the deeper problems of the human soul", such as human frailty, suffering and death, and "only opening up to the mystery of God, which is Love, can quench the thirst for truth and happiness in our hearts"; only everlasting life "can give an authentic value to historic events," the Pope said in the general hearing on Wednesday in the inner courtyard of the Papal Palace of Castel Gandolfo. Benedict XVI's speech was once more focused on the solemnity of the Assumption of the Virgin Mary, which was celebrated yesterday, which was a "very important day for Christians since the early centuries of Christianity". The Pope added that, "The Assumption evokes a mystery which concerns each and every one of us, because Mary shines down here as a sign of certain hope and consolation for the people of God", thus reprising the second Vatican Council. Ratzinger also said that "Daily events distract people from this reality of spiritual consolation, which is a very important part of faith. Some live as if they would never die or as if everything were to end with death. Some act as if man were the only maker of his destiny, as if there were no God, sometimes even denying that there be space for Him in our world." Then he spoke about the idea that in spite of the great progress in science and technology, the deepest questions in the human soul, that is, human frailty, suffering and death, remain unsolved. He then invited everyone to contemplate Mary, through whom "we understand that earth is not our definitive home and that, if we live with respect to the eternal goods, we will one day share her glory; even through a thousand daily hardships, we must not lose our serenity and peace". (AGI)
at August 16, 2006