Future of the Church in England and Wales 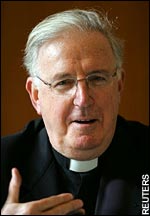 This is an interesting article about the future of the Church in England and Wales. Fr Ker's remarks below seem to sum up what the reaction of many, not just in Rome but the rest of the world, to the Catholic Church in this country. At the election of Pope Benedict, the surprise and in some quarters horror, in the English Church raised more than a little concern.

Ian Ker, a Church historian, said: "There is a perception at the Vatican that the English Catholic Church has become too detached from Rome in recent years. They'll be looking for someone who will steer the Church away from the liberal course it has been pursuing, which Rome believes has been a major factor in the decline of Catholicism here."

the rest of Telegraph article may be read here
http://www.telegraph.co.uk/news/main.jhtml?xml=/news/2006/07/30/ncard30.xml

As someone who regards the Cardinal as a frioend I am a little biased, certainly the Cardinal's time at Westminster got off to a bad start with suggestions that he covered up a very serious charge of sexual abuse by one of our diocesan priests, Michael Hill. What I understand is that Cormac's problem in this situation was his ignorance of such situations and took the advice of several experts who suggested Hill was "safe".
The diocese of Westminster had been badly run by Cardinal Hume, who, for all his saintliness seems to have been unable to raise the moral of his clergy or impopse any discipline on them. Some of his first acts at Westminster upset many of the liberal chattering classes, for example the removal of a large number of semiarians, who apparently did not believe the teaching of the Catholic Curch or who would be incapable of living the celibate life of a priest. He also removed priests, and lay members of staff of the archdiocese who were either living immoral lives or who were teaching stuff which was patently incompatable with Catholic faith.
One of the criticisms made by a priest friend in Westminster Diocese of His Emminence is that the number of administrative staff has not been cutback, "they do nothing", he said, "except undermine the Church and the Cardinal, and place a growing financial burden parishes"
at August 01, 2006