!!BEWARE THIS IS ME GRUMBLING!!
As one get's older one seems to realises more and more how crotchety one gets and how many things really irritate, but the dreadful trouble is that they most probably don't irritate other people. I have always realised that I am a bit odd as a priest and maybe some of my parishioners might agree with me.
That being said one of my big hates, is priests who find it impossible to say Mass according to the Roman Rite. I mean priests who can't read the rubrics. "They come and supply and they are not house trained", complained a friend. Another friend of mine had a priest who was sent to relieve him for a much needed holiday, who made up his own Eucharistic Prayer, his parishioners were horrified, especially as English was not his first language . I had a Indian Bishop here, who expressed surprised that my people didn't respond, I had to tell him that they would if he used the words in the Missal but if he made up his own they were merely left confused. He told me that as a bishop he was able to improvise, I had to remind him we were all of us servants of the Church none of us, not even the Pope, as he has said himself, are its masters and certainly not a bishop who's role is to safeguard the liturgy.

There is a real ignorance of what is supposed to happen in the liturgy, simple little things for example, the Ceremonial of Bishops says quite clearly that the hands of a priest are supposed to be joined palm to palm, thumbs crossed. The "Dominus vobiscum" before the gospel is to be said without extending one's hands, the contrary is invariably done. Deacon's are supposed kneel at the consecration, they generally stand. So many priests seem incapable of raising their hands in prayer according to the rubrics, or even elevating the sacred host as the should. So many have given up genuflecting to the Blessed Sacrament on entering or leaving the sanctuary, not through infirmity, or even disbelief (I hope) but simply not understanding the Church's language of gesture.
They are simply not giving people what they are paid to do, that is to say Mass according to what the Catholic Church expects. Most priests are reasonably intelligent, but I suspect most have never bothered to read the bits in red that tell you what to do. At one time I thought I was just cranky but I am pleased that more and more people like successive Popes, and now Cardinal Arinze, the Prefect of the Congregation of Divine Worship are rather forcibly stressing that people have a right to receive the Catholic liturgy from priests and bishops according to what is set forth in the liturgical books of the Church.

The American website Curt Jester has an amusing piece on the reason for this blindness to the rubrics. 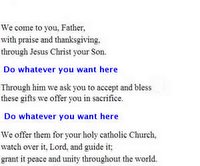 I hate that one handed elevation, which became popular in 70s. The late Pope used to do it but I think that was due to illness.

Yes, I agree - sometimes it's a case of 'blink and you'll miss it' (viz. the Elevation).
It's a pity that some clergy have become so blase about the Mass, especially the Consecration. Don't they realise what a truly mind-blowing privilege it is that they can, by the power of the Holy Spirit, turn ordinary bread and wine into the Body and Blood of Christ?

have you ever thought about putting your sermons on this blog, Father?

Just re- found your blog - it's cool to read this. Just back from Ireland. I think it's fair to say that if you think it's bad here, in my little experience, the liturgy is contorted and gnarled to pieces over there. Nice post though, cheers!

I blame the bishops, they seem to give the impression that they believe less rather than more than the laity.
I am afraid most priests seem to do the same.

I love the Curt Jester's religion but not his politics.

I've been thinking about your rant for a couple of days. I completely agree but I couldn't decide why it bothered me as an ordinary church-goer when a mass isn't laid out how I'm used to it. It's not as if l would know whether a priest was genuflecting in the right places or not. I think for me the most wonderful thing about going to mass in a different place is when it's exactly the same as at home - it reinforces the universality of being a Catholic. When l was in Italy earlier in the year, I went into a church, guide book in hand, and there was mass going on in a side chapel. I sat down to listen (even though it was in Italian and my Italian is appalling.) Suddenly l heard the alleluia sung just the same way we sing it here at home. It was that familiarity that made me realise how being a Catholic can be such a wonderful thing.