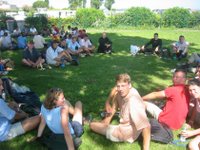 Pere Jacques du Pont happened to drop by to say Mass at a side altar the other day, afterwards over a cup of coffee, he told me about another

thriving French community, LA COMMUNAUTÉ SAINT-MARTIN, one of his nephews has just joined them.
Their main work is amongst young people, catechising, celebrating the liturgy decently and pilgrimage, which always seems to include the "camping", the mainstay of French youth work. Pere Jacques says that the main thing is to get young people in a situation where they are able to talk to a priest who takes them seriously, but above all takes God seriously. He assured me that amongst young people in many parts of France there is a real flowering of the faith amongst the young. "They are rejecting their parents agnosticism, they are rebelling against the relativism that has caused them pain and made them victims. In this they see the Church as their ally".
I am afraid the site is in French only.
at August 25, 2006

Yes, look they are all wearing cassocks.
Why is it young are attracted to cassocks or habits? I mean both the priests and laypeople?
Even nuns, notice the dying orders dress like retired school teachers the thriving ones wear habits.

who are the thriving Orders and the dying ones?

The worst thing my congregation ever did was to get rid of the veil. I have only come to realise this since I retired from teaching.
In my seventies I have started working with Islamic women in the inner city and following their inspiration some of us have started "to veil" again. It is amazing, I am obviously Christian but I am also covered. Almost half the people in the streets of the city are Asian, now because of the veil young Islamic men seem happy to talk to us.
Men and young women call us "Mother" a title we haven't used for over thirty years. Older women call us "Sister", they do it naturally as they would their own female acquaintances, not because of our vocation but because of our dress. Here, there is a sisterhood in the veil which transcends religion, but also opens the way for frank discuss of it.
The other day I was delighted a young western women, with tattoos, thrust her baby into my arms as she struggled with her pushchair. at the bus stop. I felt it was an act of trust.

p.s. what idea this blog is, well done Father.

Should read,
What a good idea this blog is ...

I was in Fontgombault, I sure there were over 80 monks, half under 40

People do seem to take more seriously those Religious who wear the habit. I agree with 'anonymous' that they are a (visible) sign of contradiction to the world. A monk I know was concelebrating Mass in a parish other than his own a while ago: after Mass, some young people, about 5 in all, asked if he would hear their Confessions.

The habit, the cassock, the veil are signs of contradiction, eccentricity for Christ.