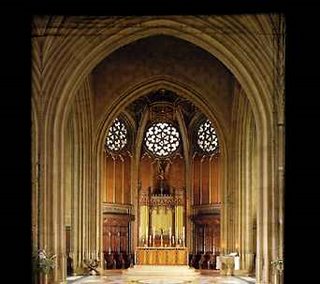 This is an amazing place, it was built for the body of Napoleon III who died in exile in England. It is French Gothic. I first went their on a foul November day and was amazed to see gargoyles gushing water. The Church is glorious, yet this is also a working monastery, it is now also the home of the Catholic Library.

It has had a number of different groups of monks living there, first of all Canons of Premontre, then a golden age of Solesme Congregation, now, I think they are Subiaco Congregation. Again in the last few years it looked as if they were going to die out, they had three or four monks. The Prior undertook an extra-ordinary policy of renewal, first of all getting rid of the pastoral responsibilities of the parish ansd concentrating on the monastic life. It attracted men like liturgist, Alcuin Reid, who has since left. Also, there was a great project to restore the monastic buildings, primarily the Church and Imperial Crypt back to what the 19th century architect had 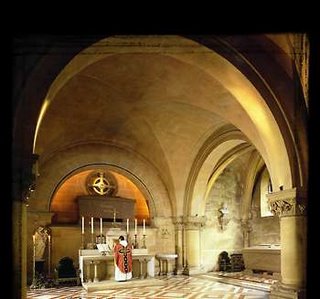 intended, now Farnborough seems to be thriving. One of the reasons seems to be that they have taken on traditional approach to liturgy and monastic life.
at August 20, 2006

Farnborough's dead cool. It's a powerhouse of prayer - pure awesome.

Rather a lot of people have left the community in recent years.