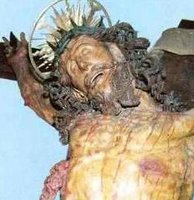 Castel Gandolfo, Aug. 23 (CWNews.com) - Pope Benedict XVI (bio - news) quietly slipped out of Castel Gandolfo on August 22, to make a private pilgrimage to a shrine in the nearby town of Nemi.
The Holy Father made the unannounced trip on Tuesday afternoon, leaving his summer residence with small police escort and making the 10-mile trip by car to Nemi, where the Santissimo Crocifisso (Most Holy Cross) shrine is located.
The Pope was accompanied by his brother, Msgr. Georg Ratzinger, and a few members of his staff, the I Media news agency reports. After praying before the Blessed Sacrament, they joined the Mercedarian priests who administer the shrine for Vespers.
Later the Pope visited the Mercedarian monastery. His stay in Nemi was about two hours.
From all indications, it appeared that the Pope had planned the visit so that his arrival would be unexpected. This was the second such pilgrimage of his summer stay at Castel Gandolfo; on August 8, he appeared unexpectedly at a convent outside Rome to pray privately for peace in the Middle East.
The town of Nemi, situated alongside a volcanic lake of the same name, is located in the hills south of Rome-- as is Castel Gandolfo.
The Santissimo Crocifisso shrine was built in 1637; the adjoining monastery housed a community of Franciscan monks before they were replaced by the Mercedarians. The shrine draws its name from the story of the crucifix that surmounts the building. That crucifix was crafted in 1673 by a Franciscan friar, Vincenzo da Bassiano. He reportedly was frustrated in his efforts to carve the face of Christ, and resigned himself to leave the task unfinished, going to sleep and planning another effort the next day. When he awoke, however, he found the image sculpted exactly as he had wanted it.
The Mercedarian order that now staffs the Nemi shrine was founded in 1218 by St. Peter Nolasco, and dedicated at first to the ransom of Christians who had been captured and enslaved by Muslims. More recently the order has engaged in training missionaries and teaching children.
at August 24, 2006