Assisi One and Assisi Three 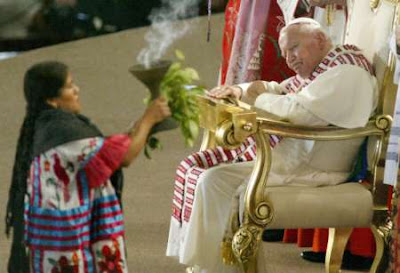 The great low points of the reign of Pope John Paul II reign were the stupid "liturgical" blunders, the kissing of the Qur'n as if it were the Book of the Gospels, being exorcised by an Aztec priestess as part of a Pentential Rite, those alone should have Archbishop Marini his head but then the actual low point of all of this was the Assisi (One) the meeting of world religious leaders. It was the the time when the Christian churches of Assisi were despoiled and turned over to pagan worship and the Vicar of Christ identified himself as a fellow traveller with polytheists, deists, shamans and witches.
As a loyal priest I found myself at the time trying to defend the barely indefensible. I did so by suggesting that the Pope alone as the first and foremost world spiritual leader was able call such an assembly and that it was perhaps necessary for all "spiritual leaders" to express some solidarity with one another for the promotion of  "Peace" in the face of growing secularisation and materialism.

Cardinal Ratzinger was the lone member of the curia who broke ranks and publicly criticised the event as being "ill judged". Since becoming Pope he has changed the structures governing the use of the Assisi churches, he has stressed that although Christians may pray alongside non-Christians they may not pray with pagans. Although he seems happy to recite the Psalms and the Old Testament with Jews he is quite clear about the inability of Christians to pray with rather alongside other "faiths".

At the beginning of the year the Pope announced Assisi Three, I was surprised but Benedict's Assisi will be quite different to his predecessors.

The Pope's New Year address to the the Diplomatic Corps clearly spoke of religious freedom, he condemned by name the Pakistani blasphemy laws, he has also called for the right of Christians to build churches and freely worship in Islamic countries. Again and again Benedict stresses the uniqueness of Christ and the Catholic Church the necessity of salvation through Christ and the possibility of other "faiths" to learn from Christianity. The difference between Assisi One and Three is Pope Benedict is charge and calls a spade a spade, and isn't afraid to do so.

This initiative should be seen as a corrective to Assisi One and perhaps a sign of the Pope's confidence that his reforms are actually taking hold of the Church.
at January 11, 2011

A disaster! Even if these silly stunts do not violate the first commandment (and I have never maintained that they do) they still cause grave scandal to traditionalists. How many times have I read sedevacantists trying to justify their schism by pointing to Assisi or all the other grotesque calamities that characterised John Paul II's pontificate.

"Benedict's Assisi will be quite different to his predecessors."

"Benedict's Assisi will be quite different to his predecessors."

As long as it is understood that it is they who are praying with us and not us with them or to their gods, there shouldn't be a problem.

Shane, I agree. As a someone who is trying very hard not to revert back to the sedevacantists, I found this announcement troubling which is made doubly so by reading posts of how this is in violation of the First Commandment, something I heard many times from the sedevacantist priests.

It is my sincere hope that Fr. Ray Blake is correct in that this Assisi event will be quite different from the ones hosted by John Paul II.

Marion, I sincerely hope so too and I also sincerely hope you do not go back to the sedevacantists! I don't understand the Vatican's infatuation with 'dialogue'. The Church should be out there saving souls and converting the heathen. I recently put up a pastoral letter by Cardinal Bourne (Archbishop of Westminster) from 1924 on ecumenism. Compare his approach to that of his successor and it gives you a realisation of how far the Church hierarchy have fallen.

My own thoughts on this topic were too long for a comment, so are posted here: http://rccommentary2.blogspot.com/2011/01/assisi-three-and-question-of.html

Whilst the more traditionalist commenters are quite entitled to express their views on Assisi 1-3, I would encourage them to try to understand the real nature of these events.

I can only say that this event should not take place. Those monumental blunders made by J.P.II should not even be hinted at and this Assisi looks suspicious to me.

Just by the way, I have heard from the lips of Bishop Fellay himself, that the SSPX does not trust some of those around Benedict XVI.

Assisi "I" (together with the Koran-kissing - which, Joe, provides the context for understanding the "real nature of these events"; deeds, not words. You do provide a useful apparatus however, for those wishing to sleep "alongside" their mistresses, rather than "with" them) was not a pontifical low point, but a bi-millenial one. I understand the deposing of Popes to be a tricky businesss at the best of times, but the survival of Pope Woytila's reputation post mortem is something that continues to baffle me.

None of my business, you might object; oh, yes it is. When someone claiming to be the ontologically unique "Vicar of Christ" consents, in the context of worship as opposed to sociology merely, to stand as a representative of "one of the great religions", it's the business of every Christian on the planet.

PS: If the SSPX don't at the very least suspend discussions pending explicit public reassurances and repudiations, it's difficult to see how they can hang on to any credibility among their supporters.

Thank you Father for covering this, but I fear you are being very kind in your reporting.

Since Pope Benedict's invitation seems to renew the previous meetings, I see no grounds for optimisim:

"It will aim to commemorate the historical action desired by my Predecessor and to solemnly renew the commitment of believers of every religion to live their own religious faith as a service to the cause of peace." -- link

He states that "Those journeying to God cannot but transmit peace, those who are building peace cannot but draw close to God. I ask you, from this moment, to accompany this project with your prayers." - if he is really referring to "my Christian brethren of various denominations, the exponents of the world’s religious traditions", how is this compatible with the de fide teaching on no salvation outside the Church?

This is not just a problem for trads, Rev. Brian Harrison covered the Assisi issue very well in relation to Pope John Paul II's beautification process here, with a very balance essay (titled: John Paul II and Assisi: Reflections of a "Devil's Advocate"):

I did so by suggesting that the Pope alone as the first and foremost world spiritual leader was able call such an assembly and that it was perhaps necessary for all "spiritual leaders" to express some solidarity with one another for the promotion of "Peace" in the face of growing secularisation and materialism.

I don't think I have read anything more depressing than the above. The promotion of "peace" without the mention of the social reign of Jesus Christ? No wonder the world is going to the dogs.

Father, I regret to say that I am swayed by Fr. Harrison's arguments. (See David Joyce's comment.) These reasoned arguments articulate exactly what I have always thought instinctively about the "Assisi" events.
Recently, the Pope made comments about contraceptives. Now, I accept that he in no way wished to change the Church's teaching. He was using closely argued reasoning, which mainly suitably trained minds find difficult understand and explain. Unfortunately, most people, Catholic and non-Catholic, will take the interpretation offered by the newspapers and - heaven help us - the TV news. Such sources are usually totally ignorant of anything Catholic or indeed anything Christian. The media can usually be relied upon to combine such ignorance with their characteristic reluctance to let the facts get in the way of a good story. So the IMPRESSION now left firmly in almost everyone's mind is that 'the Pope says condoms are OK'.
In just the same way, JPII and now BXVI, even if they were to say nothing blameworthy, the very sight of Peter's Successor and wearer of the Fisherman's Ring, giving house room and warm words to so many non-Christians and even non-religious people, must again result in the final and lasting IMPRESSION that 'the Pope says all religions are as good as each other'
Thus the final effect of these events - and probably others - is that people will be confused. For Pope's to confuse their flocks is surely an odd way to 'feed my lambs'.