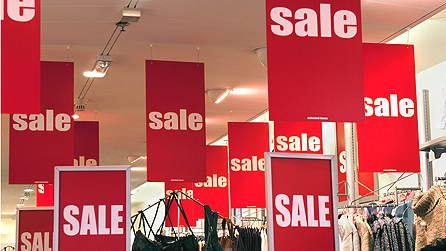 January Sales and the Ordinariate for some reason seem to juxtapose themselves in my mind.

Anglican former bishops moving, gliding almost, from the CofE to the Catholic Church, being ordained within just over a fortnight, priesthood following diaconate almost without a breath in between. It seems as if the Pope has flung open the doors and is offering admittance to the Church at bargain basement prices. It throws our whole rather complex sense of "RCIAing" people into confusion, it is bit like Philip and the Ethiopian eunuch, a quick discourse on a passage of Isaiah and baptism, and that was it, no more, not even the Eucharist.
Presumably what Philip was looking for was faith. The same with Ordinariate.

All that is required is an affirmative response to the question, "Do you you believe in contents of the Catechism of the Catholic Church? and can you say also say that you believe and profess all that the holy Catholic Church teaches, believes and proclaims to be revealed by God? That is all, anything else is froth.

For those who have spent a life time making the profession of those key statements and now find themselves marooned on their catholic island amidst a sea of liberal belief the Pope is indeed offering a life-line by welcoming them aboard the Barque of Peter, not only that but welcoming them to share in the command of the ship. The parable of the eleventh hour workers in the vineyard comes to mind.

It is easy to be niggardly about the Ordinariate but the Pope has opened wide the door to those who had mistakenly thought they were already part of it. It is up to us to to follow the example of his generosity.
It is like the January sales, Grace is freely available at bargain prices - just like Pentecost - but Grace often appears cheap but the cost is to follow Christ on the narrow way. For those who set out on the Ordinariate path the cost  seems to be a little like cost paid by founding colonist on a strange shore, estrangement from friends and all that is familiar, after the initial euphoria there will be the dull daily slog, for the rest of us the cost is learning generosity.

How Pentecost must have hurt!
And just like the January sales lots of mess afterwards!
But it is so exciting!
at January 05, 2011

The reason these men are being ordained so quickly is because the Ordinariate needs to be set up quickly. Their priesthood is not for themselves - it is for the benefit of countless others who will be brought into the life of the Church through this movement of the Holy Spirit.

Yes Basil, but it is so exciting!!!

I agree Father, I'm excited too!!!

As one who is in the process of getting onto the Barque of St Peter, I am grateful to our brethren in the Catholic Church who have been so generous in saying 'come in'. The Holy Father has indeed made possible a gift that can have only come from God through him as the Vicar of Christ.

As a lifelong Irish Catholic (albeit a not very good one), I totally agree with you Fr Blake. Your analogy between this and the 11th hour workers is absolutely perfect.

A hundred thousand welcomes to *all* who enter the Catholic Church - whether or not it brings any difficulties, it will bring many blessings. If it brings many difficulties, this will be God's will and we must welcome the difficulties also with open arms - in any case we need to make much penitance for the sins of our age.

Thank you for your generous welcome, Father. We'll try not to be too noisy or disruptive - and I'd be glad of your prayers as my wife and I are received on January 21st ... ready for my ordination in Portsmouth 'before Lent'.

When you come be as disruptive as you can, take up the carpet, have the keys to cellar, let's have a party.

Ignore the sullen brother muttering about the goat, he'll come round, for my brothers who have been dwelling in captivity in a distant country will be home soon.

Parable of the Labourers - let's rejoice at those who've arrived at the last hour...

It is great to see such enthusiasm from both cradle Catholics and those seeking to join the Ordinariates!

It may seem that the Holy Father has built a bridge across the Tiber with a very low priced toll to cross, but it really is not that cheap for us who are set to follow that path.

There is no need to go in to great detail, but let me assure you that many of us have already paid quite a price to this point, and it seems that we may still have more to pay in the future. In fact, some of us may or may not be allowed to enter into the Ordinariate as priests, and if it is the case that any of us are called out of the priesthood (for a time, or forever) than the cost to us will be quite high indeed.

That being said, it's important for all to understand that those of us who are priests and know that coming into full communion with the Holy See is a must, also stand ready to sacrifice whatever we are called to give up in order to do so. Even if it means exchanging our collars for ties. For we have no right to the priesthood; it is God that calls us to act on His behalf in Holy Orders, and He certainly can call us out of Holy Orders if it be His will. "nevertheless not my will, but thine, be done."

Let us continue to pray that God will open the doors and build the bridges that will allow us to once again be in full, visible communion with the One, Holy, Catholic, and Apostolic Church