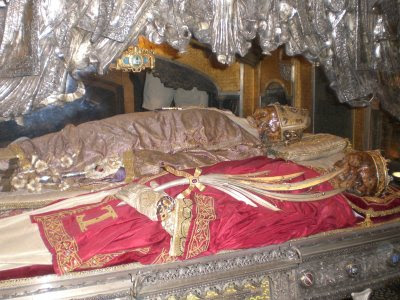 One of the things about the modern Church is its all a bit wimpy, what has happened to the modern papacy? There hasn't been a papal mistress for centuries, conclaves are bribe free. In the good old days you knew who was going to be Pope by the amount of silver a man had to bribe the other electors with. Bishops were corrupt despots. Parish priests were unchaste drunken lechers. Monks and nuns were worldly and no better than ought to have been.
Those were the days when we needed saints because it was so obvious the Church on earth was so corrupt and order to get saints cities went to war, pirates broke into churches to steal relics. Where relics weren't available they were "found" or as we say in Latin invented.
Well, I was rather heartened to read this story about a Cypriot monk found at Athens airport with a skeleton of a nun.


"They maintained it was a woman who was a saint," a Greek police official who declined to be named told Reuters on Tuesday, adding that the monk told authorities he was transferring her remains to a monastery in Cyprus.

The remains were those of a nun who died four years ago. She was not a saint in the Greek or Cypriot Orthodox Churches, but had once been a nun at a Cypriot convent, police said.

thanks to CMR
I suspect in reality the monk was most probably taking the nuns remains back to her family or motherhouse for reburial as cheaply as possible but it is wonderfully medaeval story.
at January 20, 2011

Bishops were corrupt despots. Parish priests were unchaste drunken lechers. Monks and nuns were worldly and no better than ought to have been.
Fr Ray your living in the wrong country take the boat to Ireland where your dream will come true!

Well, Father, the parish priests may have been drunk, but they weren't lechers if they were simply exercising their apostolic right (I Cor 9:5) to "take a Christian woman around with them as a wife"/circumducere sororem mulierem!

That's right, I argue that there is no valid law of celibacy (let alone, as per current issues, an obligation for married clerics to be continent). Canon & of Latern II is invalid law, as being based on a false premise - that the sexual act is impure. This premise cannot be reconciled with the catholic faith. It no more has the force of the church behind it than, say, the law which purportedly made the new missal compulsory.

Many good and holy priests have been defamed on account of a manichean view of sex and marriage and a philosophy of legal positivism. While I'm not accusing catholics of the counter-reformation persuasion in matters of church discipline of actually being pharisees, there is an undeniable tendency in that direction of the asceticism and legalism of the post-reformation church.

"Fr Ray your[you're]living in the wrong country take the boat to Ireland where your dream will come true!"
Are things really so bad in Ireland?

Hmm, I'm not sure I can usefully contribute to the comments already listed, but isn't that a picture of Saint Ambrose with either Saint Gervase or Saint Protase? I saw them only last month!

Certainly an unusual news item. When returning through Customs on Monday night a man directly behind me was singled out and asked to 'walk this way'. I did wonder for an instant if he too was carrying bones after having heard the news at the weekend! And yes I was frisked yet again on the way out! I must have a guilty face.

Ches mentions the picture could be of St Ambrose and either St Protase or St Gervais who he saw recently. I could find no detail when clicking on the photo. I visited the reliquary containing the body of St Vincent de Paul last weekend - few English Catholics seem to know where to find him in Paris and yet he is only a short walk away from the Chapel in the Rue du Bac which is familiar to all. You do need a head for heights though as he is displayed way above the altar and approached by a series of steps behind.