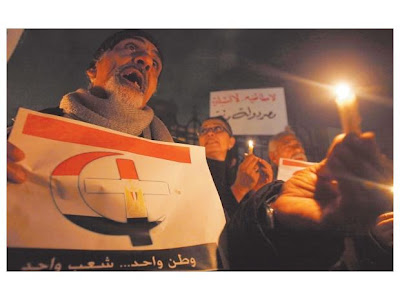 There are reports of a remarkable backlash against sectarianism in Egypt, yesterday Coptic Christmas saw large numbers of Muslims joining their Christian neighbours as "human shields" at Mass.
at January 08, 2011

God bless them for this!

Now, let them root out al-Qaeda and do unto them something unpleasant.

This puts me in mind of something I experienced many years ago, when the Northern Ireland "Troubles" were beginning to show some signs that they could be coming to an end. I was living in Ireland at the time.

There was a day of demonstrations organised. In the North, with (mostly) Protestant congregations and their Ministers holding rallies aimed at the terrorists who described themselves as "Unionist". In the South, (mostly) Catholic congregations aimed their demonstrations at those who espoused a "Republican" sentiment. The message was the same from both sides: "We do not give you permission to murder in our name."

Blessed are the peacemakers.

Northern Ireland is one thing, al-Qaeda another.

It occurs to me that al-Qaeda may be materially similar to Amalek, whose people originated in the neighbourhood of Mecca according to Abu al-Hasan al-Mas'udi (896-956).

Moses swore that God would be forever at war with Amalek throughout the generations (Exodus 17:16) and took the kingship from Saul to give it to David because Saul had failed to exterminate the Amalekites completely. They were finished off only during the reign of King Hezekiah.

Amalek's characteristic vice was a gratuitous, unshakeable and maniacal hatred of Israelites, and is seen in the letter of Haman (a descendant of King Agag of the Amalekites) in the Greek version of Esther.

Haman defames the Jews as an irreformably wicked people who, by their wickedness, constitute an existential threat to mankind and to the stability of the empire - therefore they must be put to genocide and completely exterminated.

After the execution of Haman the voice of Amalek fell strangely silent for a thousand years until it spoke again through Mohammed:

If you go to www.memri.org you can watch subtitled video clips which show samples of the most depraved expressions of Jew-hatred which is broadcast throughout the Middle East.

God bless those wonderful people, our fellow descendents of Abraham.

They are a living rebuke to those who would peddle gutter Islamophobia.

Muslims aren't descendants of Abraham, at least not spiritually.

Arabs are descendants of Abraham through Isaac's brother Ishmael, and most Muslims are not Arabs.

The heritage of faith and divine revelation passes from Abraham to Isaac to Jacob, passing over Jacon's brother Esau.

Esau's grandson was Amalek, so given what I posted earlier, it is easy to understand Malachi 1:1-5 and Romans 9:15, where God says "I loved Jacob, but I hated Esau".

The vast majority of Muslims are respectful towards Christians.There are nutters in all society and the damage they do will be condemned by right thinking people of all religions.

The name Al Qaeda keeps cropping up,this is just an invented name conjured up by the West the same as Viet Cong,it just gives us an enemy to set our sights on.

All the time we interfere with other peoples way of life the more these nutters will do their damage.

The latest incident in Arizona was brought about because somebody didn't approve of somebody elses political outlook.

Red Maria: You express the teaching of the Church when you say that Muslims are the (spiritual) descendants of Abraham, regardless of what others have written.

Lumen Gentium 16 states that..."the plan of salvation also includes those who acknowledge the Creator. In the first place amongst these there are the Mohammedans, who, professing to hold the faith of Abraham, along with us adore the one and merciful God, who on the last day will judge mankind." As this is a dogmatic declaration, all Catholics are bound to accept its statements.

If you visit the Vatican's website and enter "Muslims" in the search engine you will find quite a few documents which clearly show that the Church regards Muslims having Abraham as their father in faith.

Parepidemos,
Correction - It is from the Dogmatic Constitution LG but is not necessarily a dogmatic statement in itself.
LG teaches dogma but in broad thrust, it needs to be checked against other dogmatic statements.

Father: Oops. Thanks for the clarification as to how Lumen Gentium teaches dogma. I didn't mean to imply that it was an ex cathedra statement, but that is how it looked in my post.

As the Egyptians once sheltered our Lord as a baby and the Holy Family from Herod, so they continue to protect our Lord in the Blessed Sacrament and his disciples.

Most moving and gives one great hope.

Well observed, Paul! The Holy Family would have stayed with Jewish families, as there were many Jews living in Egypt at the time. It is also unlikely that Herod's men would have ventured there, for not even a Roman Senator was allowed to set foot there without the permission of the Emperor.

Icons of the Holy Family in Egypt sometimes depict Salome the midwife - it is unsurprising that she would have come with them, as men wicked enough to kill an infant would not have stopped at interrogating and torturing the midwife for any information they though she might have.

Whilst this is a good gesture by Muslims in Egypt, one can not dismiss the harsh reality that life for Christians in Egypt is getting decidedly worse. To ignore this is simply taking an ostrich in the sand approach. I agree the majority of Muslims are good people who want nothing better to get on with their lives, but non-Muslim minorities in Muslim majority countries often face a lot of discrimination. This has increased in recent times for various reasons. I know this from personal experience with Christians from the Middle East. There are a few exceptions like Syria, Jordan and Lebanon.

Egypt is home to the Muslim Brotherhood, an Islamist movement that wants to create a Islamic caliphate. Some lucky, prosperous Christians have managed to migrate to the west, but the rest of them have to manage by themselves with little help from the authorities. As Christians, we should try to support our fellow brothers and sisters in Christ. I support Aid to the Church in Need.

Thankyou "St Michael".I thought the incident in Tucson was brought about by anti Democratic Party propaganda.Congresswoman Giffords was deliberately targeted by the Anti Health Reform faction and that is what happens when you get nutters around trying to make a name for themselves,just like odd-ball" Muslims" who have been fed garbage of what is actually written in the Koran.

I support JI in what he says and also I support Aid the the Church in Need. Having recently visited Jordan, Israel and Egypt on a pilgrimage to the Holy Land I saw just how fellow Catholics were trying to get out of the Middle East.
We had Mass in Jericho and the Parish Priest assisted our priest in the distribution of Holy Communion. After the Mass our guide said to us that that priest in Jericho would normally have a congregation of four people. Now, how can a congregation of four support a priest, a church and a school? When I returned home I immediately sent money to Aid to the Church in Need.

"...Thankyou "St Michael".I thought the incident in Tucson was brought about by anti Democratic Party propaganda.Congresswoman Giffords was deliberately targeted by the Anti Health Reform faction..."

When we allow our children to be taught by Caesar, we should not be surprised when they behave like Romans.

The problem is the lack of catechism.

The boy had no dirction; his end is murder unless a Priest intervenes.

Pray that one comes to his aid.

I was mightily impressed by the behaviour of these Muslims after all the negative stuff we hear about them. I take the point about discrimination against Christians, though.

On that point about being descendants of Abraham. I haven't checked other documents, but, with reference to Lumen Gentium: when the Council says they "profess to hold the faith of Abraham", that doesn't mean that they are correct in thinking that they actually do profess the faith of Abraham. This looks like a statement about what they believe; not whether that belief is correct. We can respect their faith without agreeing with it. If interpreted this way, the issue of whether it is ex cathedra teaching does not pose a problem.

They are a living rebuke to those who would peddle gutter Islamophobia.

Unfortunately Red Maria - while this gesture is to be praised it does not help the fact, that the majority of Muslims do not protest the outrages done to Christians in Islamic countries.

And if the "vast majority" of Muslims are so respectful to Christians, why is it that Christian places of worship are still prohibited in many Islamic countries, while Muslims are given a free pass to build mosque after mosque in Europe? It is all to easy to fire of emotive quips like "Islamophobia" while refusing to actually engage in the debate as what Islam really is.