No New Ambassador to the Holy See 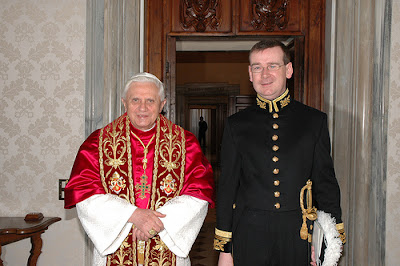 I caught this in The Telegraph about the continuing absence of the naming of a new British Ambassador the Holy See. Francis Campbell leaves his post at the end of this month.
The suggestion that Ann Widdecombe might have been appointed was a bit of a joke, a retired somewhat combative outspoken politician is hardly going to oil diplomatic wheels. The suggestion that Chris Patten might be willing to combine the job with being Chancellor of Oxford University again seems laughable, I can't imagine the last governor of Hong Kong working with a couple of part time staff supplemented by a handful of volunteers.
Apparently George Edgar will be the interim chargé d'affaires to the Holy See, the problem is that although the Papal visit was a remarkable success there is still a sense that the British do not take the Holy See seriously after Anjoum Noorani's escapades that preceded Patten and Edgar's appointment to oversee the visit.
There were protests from the Secretariate of State a few years ago when the Blair government wanted to make the British Embassy to the Holy See a subsidiary branch of the Embassy to Italy as part of a cost cutting enterprise.
at January 11, 2011

This ridiculous coalition could not be trusted to appoint a sensible Ambassador to the Holy See,they can't even make their minds up whether we should remain part of the EU.

They only jumped onto the bandwagon of the success of the Papal Visit after it became obvious that it was a resounding success.