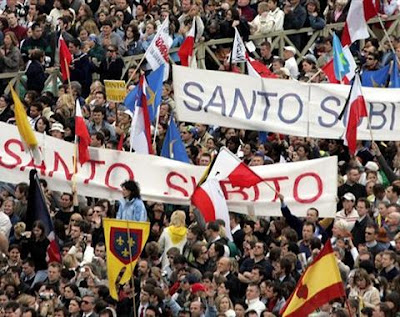 The announcement of the immanent Beatification of the Venerable John Paul II was no shock, he will join the hundreds of men and women that he himself Beatified and Canonised.

In fact practically every parish or religious community in Rome seems to have a Venerable, a Servant of God, whose cause has been passed on from the diocesan process of the examination of their lives to the Congregation for the Causes of Saints, most are men and women of the 20th century.

In most parishes there are men and women of outstanding Christian virtue whose memory shines for a decade or two and then they are forgotten. In my diocese, my parish I there were outstandingly good and virtuous priests in the past, often a bit cranky but they were inspirationally holy, the same with lay people.

Pope John Paul II genuinely tried to vulgarise sainthood, to make it a normal part of ecclesial life. In the diocese of Rome there is a permanent diocesan office that looks at the possibility of Beatification for members of the diocese and it regularly feeds names to the Congregation for the Causes of Saints. I wonder whether such an office should exist in every diocese. Every diocese should have an Exorcist, I think we should have opposite too, someone archiving and investigating outstanding holiness, looking for the supernatural in lives of the dead. Even if the diocesan process leads nowhere, at least there will be a preservation of the memory of the life and works of extraordinary men and women.

I think John Paul wanted us to see that the normal consequence of Baptism and Communion with Christ in His Church was heroic sanctity, that it wasn't rare as we might have supposed in the past. I am sure that he felt that in a Church that has become obsessed with the horizontal, highlighting individual sanctity was a way of emphasising the ultimate purpose of the Church: to bring us into communion with God and to save our souls and to act as a reminder that God's Grace flows into His Church through his Saints. He was trying to present us with a new "model" of Church.
at January 15, 2011

He was trying to present us with a new "model" of Church.

And that precisely why the church has been experiencing the problems it has for the last 40 years. The post conciliar popes, instead of holding fast to tradition, have cast the barque of Peter adrift with all their reforms and "new models" for the body of Christ.

The canonisation process has now become so banal and pedestrian, that it won't be long before we are canonising non-Catholics and holding them up in veneration. You laugh and say, "Never"? Well who would have thought we would have a pope praying besides all sorts of religions that deny the existence or various natures of God. It would have been unthinkable in the times of St. Ignatius Loyola and St. Robert Bellarmine. Now anything and everything is possible.

Your perspective on the prolific saint-making of John Paul II is very interesting.

I see things somewhat differently. I bought my young son a book of saints' stories and we read one or two every evening. The thing that strikes you is that the vast majority of the saints in the liturgical calendar lived centuries ago. OK, there are a few from the 19th century and a couple from the 20th (e.g. Maximilian Kolbe). But my son has spotted the problem -- the Church is holding up for veneration a group of saints that is mainly male, mainly priests and religious, mainly southern European and mainly long dead.

I think John Paul II was trying to redress the balance, by giving us a more balanced, more diverse and maybe more relevant group of saints.

Francis,
"Relevance" is very important and so is sanctifying the modern world.

It would have been unthinkable in the times of St. Ignatius Loyola and St. Robert Bellarmine. Now anything and everything is possible.

“We should always be disposed to believe that that which appears white is really black, if the hierarchy of the Church so decides"
- Ignatius Loyola (not George Orwell).

“We should always be disposed to believe that that which appears white is really black, if the hierarchy of the Church so decides"
- Ignatius Loyola (not George Orwell).

The problem for some of us is that the Church appears to be condradicting herself. For example when you read pre Vatican 2 encyclicals and put them alongside the "new models".

This except is from Wiki:

"Mirari Vos's opposition to religious pluralism was considerably softened (Some would say contradicted. my note) by the constitutions of the Second Vatican Council. In particular, Gaudium et Spes approves of the pluralistic culture of modernity,[citation needed] while Dignitatis Humanae supports Church-State separation and human rights".

It seems to me blind obedience is the only position some people can take as the facts don't seem to support any continuity of teaching.

"But though we, or an angel from heaven, preach a gospel to you besides that which we have preached to you, let him be anathema".

Not all statements from the hierarchy of the Church can given unequivocal support or your mind will twist like a pretzel trying to square a circle.

Jeff - I wasn't commending Ignatius of Loyola's prescription, as the reference to Orwell was intended to indicate.