Dubium: Concelebrating Priests at the Doxology 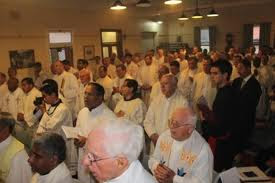 I don't have too much of a problem with Concelebration, at least with Concelebrating with my Bishop. It is a sign that the Bishop has "co-workers"; in the Orthodox world it seems to be a sign that the bishop never acts alone but always with his clergy.
I must say I do have a bit of a difficulty with vast concelebrations where priests should have to say "That" rather than "This is my Body". It seems silly to me to be so distant from that which is consecrated.
I am a bit more skeptical at concelebrations without the Bishop, with Fr Blogs as the principle celebrant: what does it mean, what sign is being given?

One of things that just annoys me, it just seems wrong and ugly is the Doxology where everyone grabs the silverware of the altar.

Father Zee has this Dubium from the Newsletter of the USCCB’s Committee for Divine Worship, there was published a response to a dubium sent to the CDW in Rome:

Role of Concelebrating Priests at the Doxology of the Eucharistic Prayer


In this dubium, the question concerned the role of concelebrating Priests and whether they were permitted to take up the various chalices from the altar before the final doxology of the Eucharistic Prayer. Quoting from the General Instruction of the Roman Missal, the Congregation emphasized the proper role of the Deacon in holding up the chalice next to the Priest for the final doxology: “At the final doxology of the Eucharistic Prayer, the deacon stands next to the priest, holding the chalice elevated while the priest elevates the paten with the host, until the people have responded with the acclamation, Amen” (no. 180).

According to the Congregation’s response, “Therefore, the use is reprobated where all or many concelebrants at the altar proceed to take up the chalices at the time of the final doxology. Rather, it is the duty of the celebrant, or the deacon, or one concelebrant to elevate the [principal] chalice.” It is presumed by extension that the same could be said regarding the elevation of multiple ciboria or patens by various concelebrants. Given the response and the principles of the General Instruction of the Roman Missal, only the main paten and the main chalice are to be elevated by the celebrant assisted by the Deacon, or in the absence of a Deacon, by a single concelebrant.

A bishop inviting a priest to concelebrate with him is a symbolic acknowledgement by the bishop that that priest shares in his ministry. Indeed, a priest may not serve the Divine Liturgy on his own at all without first receiving from his Bishop an antimension, similar to the Western corporal, but containing amongst other things the bishop's signature. If a priest is placed under censure, the bishop will take back the antimension and will forbid him to concelebrate.

But I concur with your annoyance, and am delighted with the CDW's response.

And further, as regards the Orthodox, they use one chalice and one paten (diskos) at the Eucharistic Liturgy, which is in visual conformity with "one Bread, one Cup". I have seen chalices which hold half a gallon or more, used by the Patriarch of Moscow at great national celebrations, and have celebrated with one holding more than a litre of wine at the Rite of Preparation of the Offering. It is so much simpler when you have a continuity of Tradition. The revolutionary disruption of Liturgy in the West in the 20th century still obviously causes heartache and headache, rather than bringing the desired peace and joy and understanding. I am truly sorry it should be so.