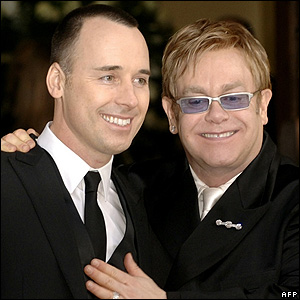 
Despite what ITV News might report (as they did the other night), David Furnish is not married to Elton John.

While we're on the subject have you heard any feminists commenting on the implications of a relationship whereby the bodies of two women are used as objects (one to supply an egg, the other a womb) to fulfil the wish of two very rich men to have a child?

Me neither. I suppose we've known for a while that homosexual ranks above female in Victimhood Poker.

"I suppose we've known for a while that homosexual ranks above female in Victimhood Poker."

And the love of money ranks above all principles, for some. Not that I know the particular reasons the women concerned offered their services, just mentioning something I have noticed, during my visit here on earth, in this non-continuing city (Hebrews 13:14).

I just feel so sorry for the child concerned when he learns (as he is bound to do one day from all the publicity given) that he has not only two 'daddys' but also two 'mummies.' No amount of wealth in this so called family will compensate for the shock he will get one day. And to think that they are now contemplating having another child.... as shadowlands says - the love of money now seems to rank above all principles.

This Telegraph article sets it out beautifully.

" ‘What we are hoping is that, by having a surrogate son, Sir Elton will make the whole concept more socially acceptable.’’ " said Barrie and Tony Drewitt-Barlow - the first gay couple in Britain to have a baby with a surrogate mother.

The sterility and sinfulness of homosexuality - the sin that cries out to heaven - cannot be undone by surrogacy or adoption.

Make the concept more acceptable? I've never heard such tosh. They did it because they wanted to and because they could. Self-gratification was the motivation. The so-called "concept" is nothing but an afterthought.
But the child, as a living being, merits our prayers.

This is nothing but a whim of two very selshfish selfcentred individuals. Who sadly have too much money at their disposal but no cencept of how precious life is.

This poor child will be a novelty, nothing more. As homosexual couples and so called 'gay Marriages' become more and more acceptable in society today, one has to wonder where it is all going to end.

Father
That victimhood Poker site seems tobe full of viruses according to my antivirus programme.

Aside from that, I was intrigued to see that this precious pair are organising a celebrity Christening. Wasn't it Elton John who wants all religions to be banned, or is it just the Catholic Church?

In fairness, Father, Catherine Pepinster has published an article in the Grauniad along the lines you suggest. Today's readers' letters (3 Jan) are a joy to read. The authors clearly have no clue about Ms P's position in the spectrum of Roman Catholic thought. You may enjoy seeing "Ma Pepsi" roundly abused as an obscurantist papist fundamentalist.

I agree with the point you're making.

I also think it is pretty ignorant to include the link to 'victimhood poker'. I get the point it's making, but it's tasteless, ignorant, and takes the piss. Particularly tastless is the inclusion of a disabled boy and the destitute.

I would also say that many of the 'victims' black, native Americans, Hispanics,women,oriental,disabled, destitute, have experienced real hardship and persecution in the past, because of Westerners, White people, Christians, and men.

Why clump these groups together with two millionaire homosexuals who have carried out perverse actions?

Please check your links a little more before posting. It's an embarrassment.

Needless to say, the two "daddies" have already secured the services of a couple of nannies sharing round the clock care, so they clearly don't relish the thought of actively parenting this poor little mite. He has just been brought into the world as the latest must-have accessory.

As I've said on my own blog in response to the identical post there, I think you miss the point about victimhood poker.

It doesn't 'take the piss' out of the groups you cite but those who claim to speak for them - usually a bunch of shakedown merchants with no real interest in justice.

You would also do well to patrol the pages of The Guardian to see how such victimhood poker operates - quite mind-boggling.

Admittedly as a white, straight male I may be said to be biased

@ paulinus - I see the point you make. However, I've worked for the widening participation office of a Rusell Group Univeristy. Many of these 'victim' groups are priority for a reason. That's why universities are actively seeking out such groups. They still need an extra hand.

People getting into top universities are not there just because they are more intelligent. Admissions have been bias in favour of middle-class, public school educated applicants, and overseas students, who are usually very wealthy and raise the profile of the university. Such students come form a culture that highly values education, it's the done thing.

Also, I dont' get why feminists would be complaining. For feminists, these women displayed a feminist achievement - complete autonomy over their bodies and reproductive lives. "If they want to rent themselves out, then go for it, it's your body, your life." It's not as if Elton John tricked or kidnapped these women and forced them.

Since the link between Elton John's actions and victimhood poker is a non-starter, it remains to be seen who it really fits your arguement, other thatn trying to group together all the things you don't like, and how they are all linked.

Perhaps environmentalists, animal rights groups, Obama etc have some part to play in all this?

I don't doubt such groups need a helping hand - they just don't need hustlers speaking for them.

I'm afraid I favour a rather elitist position - that entry should be solely on the basis of academic merit, so I daresay we won't agree on this.

The point about feminists is that it is very unusual that they are not commenting on the control two very rich men are exerting over the bodies of these women. I suspect the reason they maintain such self-censorship is precisely because these men are prominent homosexuals and that trumps them as women - hence the Victimhood Poker stuff.

Entry based on merit isn't elistist, it's just common sense and justice, and I think it's fine.

The reason the public school educated get entry so much more than others is because they come from a culture that values education. They have lots of help along the way from school, even down to the type of cirriculum they follow, which allows greater imput from teachers in the area of course work. So they can get better grades. It's nothing to do with actually being more intelligent. They have more support. They also have more in terms of sports and other hobbies to fill-out their aplications.

They reason universities, particularly the Russell Group, make special effort for certain groups, is becasue they are intelligent and get good grades, but don't come from families or schools that encourage pupils to aim high. At best, they are advised to go to the local uni in the bottom 20.

This isn't just theory, I am a case in point: from a working class background, all the family have trades and left school at 16. I was the first person in 3 generations of family to go to uni (top 10). Also the first in 3 generatiosns to get an MA (from a top 5 uni), and a secure PhD offer (from they same).

I don't think Elton John has control, he asked, they said yes. They cooperated. Perhasp they also support the idea that homosexua couples can raise children, whether two men or two women. It would look inconsistent if feminists were to critque two homosexual men, whilst calling for the same thing for two lesbian women.