Personal Ordinariate of Our Lady of Walsingham 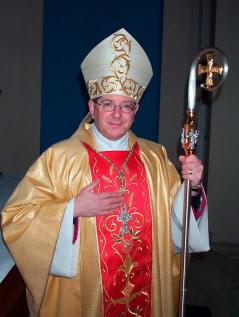 As the ordination of the three former Anglicans takes place the Holy See announced the name of the Ordinariate: Personal Ordinariate of Our Lady of Walsingham under the paronage of the Blessed John Henry Newman and the fact that Fr Keith Newton will be the Ordinary - Congratulations!


In accordance with the provisions of the Apostolic Constitution Anglicanorum coetibus of Pope Benedict XVI (November 4, 2009) and after careful consultation with the Catholic Bishops Conference of England and Wales, the Congregation for the Doctrine of the Faith has today erected a Personal Ordinariate within the territory of England and Wales for those groups of Anglican clergy and faithful who have expressed their desire to enter into full visible communion with the Catholic Church. The Decree of Erection specifies that the Ordinariate will be known as the Personal Ordinariate of Our Lady of Walsingham and will be placed under the patronage of Blessed John Henry Newman.
A Personal Ordinariate is a canonical structure that provides for corporate reunion in such a way that allows former Anglicans to enter full communion with the Catholic Church while preserving elements of their distinctive Anglican patrimony. With this structure, the Apostolic Constitution Anglicanorum coetibus seeks to balance on the one hand the concern to preserve the worthy Anglican liturgical, spiritual and pastoral traditions and, on the other hand, the concern that these groups and their clergy will be fully integrated into the Catholic Church.
For doctrinal reasons the Church does not, in any circumstances, allow the ordination of married men as Bishops. However, the Apostolic Constitution does provide, under certain conditions, for the ordination as Catholic priests of former Anglican married clergy. Today at Westminster Cathedral in London, the Most Reverend Vincent Nichols, Archbishop of Westminster, ordained to the Catholic priesthood three former Anglican Bishops: Reverend Andrew Burnham, Reverend Keith Newton, and Reverend John Broadhurst.
Also today Pope Benedict XVI has nominated Reverend Keith Newton as the first Ordinary of the Personal Ordinariate of Our Lady of Walsingham. Together with Reverend Burnham and Reverend Broadhurst, Reverend Newton will oversee the catechetical preparation of the first groups of Anglicans in England and Wales who will be received into the Catholic Church together with their pastors at Easter, and to accompany the clergy preparing for ordination to the Catholic priesthood around Pentecost.

The provision of this new structure is consistent with the commitment to ecumenical dialogue, which continues to be a priority for the Catholic Church. The initiative leading to the publication of the Apostolic Constitution and the erection of this Personal Ordinariate came from a number of different groups of Anglicans who have declared that they share the common Catholic faith as it is expressed in the Catechism of the Catholic Church and accept the Petrine ministry as something Christ willed for the Church. For them, the time has now come to express this implicit unity in the visible form of full communion.

Thanks be to God

And Archbishop Nichols' homily now on google news is a-maz-ing. I can't think of another homily of his like it. It just shows what can happen when the Holy Spirit gets to work.
By the way, Father, I was 1ooking on the cathedral site for pix, but a bit early for them to be uploaded, and came across this:

It's a training day in the new translation for singers. Perhaps your DoM and choir might be interested.

Prayer and work for unity amongst all Christians is one aspect of our charism in the Community of Our lady of Walsingham (www.walsinghamcommunity.org) so today is a day of great joy and celebration for all of us. The links grow stronger day by day and we're sure that God is working powerfuly in our land. The best is yet to come....

Thanks Georgem, just posted it.

Sr Camilla, It is a great day indeed.

Will he wear a mitre and use a crozier as an Ordinary? I know the Apostolic Prefect to the Falklands is a priest but is permitted to use ponitificalia. I assume he will also be titled Monsignor?

Yes,
As an Ordinary, I understand, he is able to apply for the right to wear a miter other episcopal ornaments, as an abbot does, and certain grades of Monsignori.