LMS Training Course: Why not go? 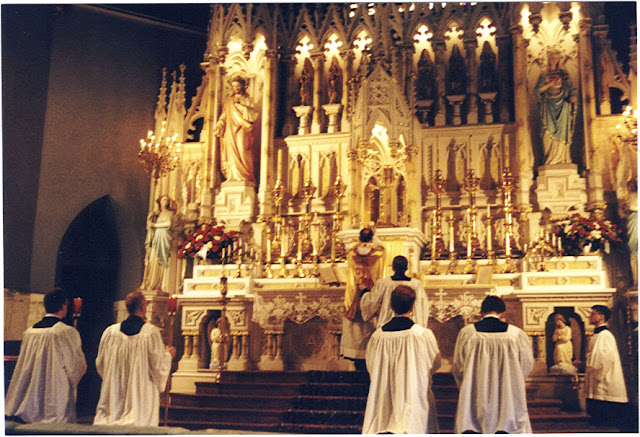 The Latin Mass Society has another training session, this time at Buckfast Abbey in Devon 3 to 6 May 2011.

For me, I get a real buzz going to these events, it is the company of other priests, being able to talk about theology and spirituality, and about just being a priest: sharing that with other priests and learning from them is important. By putting on these training sessions the Latin Mass Society does the priesthood in England and Wales a great service. Meeting younger priests who are enthused by the Liturgy and by what is happening in the Church today is actually quite exciting. The liturgies are beautiful, the speakers are often interesting but its the sense of fraternity that is important.

For priests thinking about going along and may be a little daunted, I would suggest they just try it. No-one would object to you celebrating the Novus Ordo, one priest I know went to three or four of these courses before actually celebrating his first TLM. The first course I went to was in Oxford, I didn't celebrate the Traditional Rite then, infact it was only after the Society of St Peter priests couldn't get here to celebrate our monthly Trad Mass, that I eventually had the courage to start doing it myself, with a bit of extra training, it was more for the people than for me. I must say I did it quite badly at first but the server and congregation were understanding, I think they things could only get better.

There is lot of nonsense talked about how difficult the TLM is to say but actually once you begin to understand a few basic rules and sequences which are quite logical, it isn't that difficult at all. Now, I think the Mass says itself, I start and it is almost as if the Holy Spirit takes over, I loose myself in saying it. I just become conscious that I enter into God's presence, I lose myself in it. My Latin is still pretty poor, I stumble over the pronunciation of certain words, I need to read the collects in English before Mass to understand exactly what they mean, I still have to use a card for the prayers at the foot of altar but the effort is worth it.

Since Summorum Pontificum the Traditional Latin Mass is now part of mainstream Catholicism, or should be. A priest should have an understanding of both Forms. He should know where the Usus Recentior springs from, what its roots are, in order to celebrate it properly and prayerfully. For me it gives me an insight into how to be a priest.

p.s. We are supposed to be having a Missa Cantata on Candlemas, it would be much better if it was High Mass, are there any priests willing to come and assist, I want to be deacon - any volunteers to Celebrant and Subdeacon? Beds and dinner available!
at January 26, 2011

Here is a web site where they have placed the Mass that is pretty good at demonstrating how to.

God be with you, Padre.

Whilst it is wonderful that so many priests are now beginning to celebrate both forms of the mass , do you not think it is of concern that the majority of masses are low masses? The music, namely the chant, should always, when possible, be an integral part of the liturgy but it is very difficult to sing and few parishes seems to have the resources to offer a Missa Cantata.

I think the solution is we need a network within each diocese which brings good singers together to learn the chant and form scholas that can travel between parishes. It saddens me that even the Missa Cantata that is held on occasions at our own diocesan cathedral, the propers there are sung to the Rossini Psalm tones.

Where are all the singers in Arundel and Brighton?

There is a lady who sings in the choir at the Sacred Heart in Hove. She is ex-Glyndebourne, I believe. She and other members of the choir might be interested in extra-curricular choral singing.
Might be a short-term solution.
I think Clare's idea for a travelling schola is brilliant.

Father,
It is important that those priests who train for the TLM follow this up with prompt action.
Clearly, their is a job to be done in preparing congregations and the Novus Ordo must continue.

But, for example, a start could be made with a weekday Mass, followed by a Sunday evening Mass and eventually a Missa Cantata as one of two Sunday morning Masses. This is the sort of programme they should be planning although the timescale will depend on the parish.

There will be resistance of course, but the Holy Father has made it clear that the Traditional Mass and the Novus Ordo should co-exist alongside each other as two equal forms of the Latin Rite, and this should be explained to the congregations.

"are there any priests willing to come and assist, I want to be deacon - any volunteers to Celebrant and Subdeacon?"

What about actual deacons or subdeacons? (Or, I suppose, instituted acolytes.) Not that I'm one. Just sayin'.