The Wedding of Christ 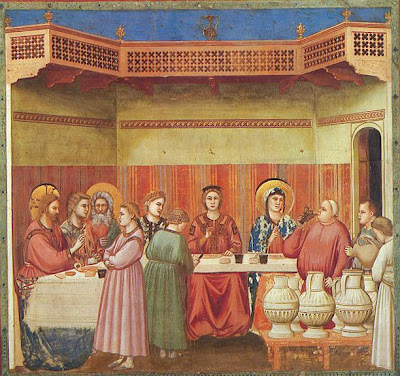 It is still Epiphanytide in the EF, I have Mass this evening, so I have been turning my mind to my homily. The reading is the Epiphany at Cana, that wonderful mysterious wedding, how sad it is almost lost in the three year cycle.
The Mother of Jesus is there. In John's Gospel she appears here for the first time, the last time she appears is at the foot of the Cross, both times she is referred to as "woman". Hardline Protestants would suggest this was Jesus being contemptuous of her but on the contrary she is in Jesus' mind and that of John "The Woman" who is faithful to the  Tree of the Cross. Her fidelity is a reversal of Eve's infidelity because she is the new Eve as Jesus is the new Adam. Her words to the servants about obedience "Do whatever he tells you" undoes Eve's command to Adam, "to take and eat" in which humankind are condemned to disobedience sin and estrangement from God.
Here, with her direct involvement, the water of the Old Testament is turned into the good new wine of the New and Eternal Covenant. The wine reminds us of the Eucharist, it is at Mary's behest it is poured out.
We can see the now empty six stone jars as being the days of creation, they are drained, used up awaiting refreshment, to be filled with baptismal water which will itself, like those baptised be transformed.

If we can look below the surface, we can ask ourselves whose wedding this is. Is it an unknown Jewish couple or is is it really the mystical wedding of Christ himself to those born of water and wine: Baptism and the Eucharist
at January 16, 2011