Following the Donkey, cannons and candles 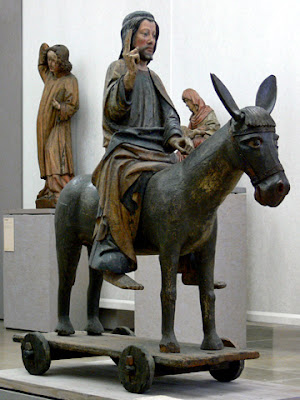 Daniel Mitsui
Wooden donkeys on wheels were once part of pre-reformation German para-liturgy.
I am not someone to decry involving a donkey in a Palm Sunday procession. For some of my neighbours a donkey pops up periodically not just on Palm Sunday but at Christmas too. There is no prohibition on donkeys. I am just afraid someone will come up to me and say that they were staying here with the usual ass rather than following the donkey.

Today, Spy Wednesday, in Milan Cathedral at the death of Christ during the Passion of Luke the veil that screened the sanctuary was torn in half whilst cannon were fired from the clerestory filling the dark duomo with smoke and flashes of fire. I might try that!

According to Daniel Rock, a 19th cent. Southwark priest, bee keepers suffered terribly because of the Reformation. One feature of English pre-reformation liturgy was a huge paschal candle, often weighing several hundred weight, they were so tall they had to be lit from clerestory and remained alight continuously until the Ascension.

Sad we have all become liturgical minimalists!
at April 20, 2011

In the sort-of parish next to mine the PP rides an actual donkey in a giant procession.

At the risk of causing ire to rise in some who read your blog, I would also suggest that 'fiddle back' chasubles are minimalist in that they drasticallly cut back what has traditionally been a much fuller vestment. Thankfully, our parish priest never uses them, but leans towards full Gothic, even when celebrating the EF.

May you, and your people, have a serene Holy Week and a splendidly inspirational Triduum.

Parepidemos,
It depends whether the chasuble is polyester or silk, whether it is beautiful or cheap. It is the quality rather than the cut.

Hmmm, I don't normally quibble about typos, Father - it might not comply with Mr Ivereigh's request for civility! - but I can't resist hoping that it was a cannon, rather than a canon, that was fired across the Duomo. If not, I heartily sympathise with the very reverend gentleman. (I'm reminded of the perhaps apocryphal evangelical complaining about the 'igh neighbouring parish that "a smoking thurifer was swung in procession, acolytes were suspended from the chancel arch, and the curates practised celibacy in the open streets."

Alan,
Gahh, Cannons indeed! Thank you, I would hate people to think that Milan had a unique way of ridding itself of the ranks of senior clergy - the thought of blood, guts, lace, mozetti being flung around the Duomo is terrifying.

Clerestory is my new word for the week!

I hope that thorough risk assessments are carried out or the clergy will have Health and Safety on their backs.

There are enough hazards in church already, what with the removal of altar rails, and priests standing with their backs to the crucifix and Blessed Sacrament.

Hence, of course, the need for the Triple Candle - there's no way you could carry that in procession!

In had not realised that Milan preserves the tradition of rending the Lenten veil. That was done in medieval England, though whether they added sound effects I am not sure.
Mind you, some medieval cathedrals might well have fired canons from the clerestory any week of the year.
A happy and blessed Easter to you all at St Mary Magdalen's

Dr Rock I think bewails the plight of beekeepers, and mentions huge candles, in "Hierurgia", it is the only Rock I have read all the way through.