At the House of Lords 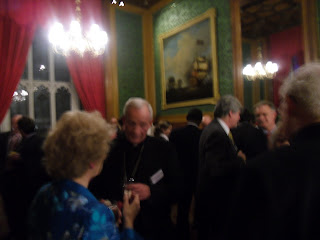 It is not every day off I spend taking wine with the great and good in the Palace of Westminster, today was an exception. My name tag, which I think was produced by the House of Lords, said that I was a "Catholic Affairs Commentator"; posh name for a blogger. 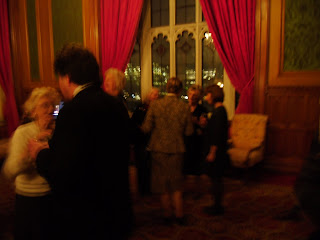 The occasion was a reception for the Friend's of St Augustine s Church, Ramsgate. A.W. Pugin's wonderful church and home, he paid for himself, it is place he chose to buried, it was supposed to be a show place for his vision of the Neo-Gothic. It fittingly took place in one of the Pugin decorated rooms of the House of Lords.


It was served by the Benedictines but two years ago they handed it back to the diocese. It seems as if it was possibly likely to become derelict, there were leaks in the roof, the electricity supply was condemned, the heating system had stopped working. A lot seems to have been put right but the architect was talking about rot in the timbers, the roof needs to be taken of to treat it, ironwork is rusting and damaging the stone, placing in jeopardy the glorious stained glass. There is tremendous amount of work to be done which should cost in the region of a million pounds.

Have a look at the Friends of St Augustine's website, we are in need and many of you have been generous to St Mary Magdalen's but St Augustine's is so important to Catholic architecture throughout the world I really do urge you to go the donate button.

The parish site is interesting too, they offer both forms of the Roman Rite.

It isn't my cup of tea; too much of just about everything. But I've given a donation. I suppose the site is too small/too removed from London to be the future HQ of the Ordinariate?

I was in Ramsgate in August. The whole town is in a sorry state.