AW Pugin produced a manifesto "Contrasts" he compared his modern and industrial age with that of the "age of faith" and found the former decidedly lacking.
This morning one of my parishioners said he didn't believe in "human rights", I think it was a bit of a throw away remark but I am beginning to wonder whether a culture that promotes our "rights" make us selfish, the "age of faith", which is really feudalism, placed everyone under an obligation and imposed duties on them, to serve and to ensure harmony within society.
With the elderly being left in their own filth or to go hungry, with a winter of strikes looming, with economic meltdown we are facing, it seems the strong and the wealthy can indeed exercise their rights whilst the weak are trampled upon.
I am not sure it was ever true, but Pugin's vision was one where man was conscious of his intimate connection with the sacred. At its heart was man as as worshipping God or as we might say today "as a liturgical person". For him that was a radical alternative to his society. It was also a Christian alternative to the visions of Bentham or Marx and Engels or any of the other constructors of new worlds of the 19th century. It raised man up from meanness conveying an idea of "Glory" rather mere utilitarianism - see the last of these illustrations, "The Public Conduit" both serve the same purpose of conveying water to the thirsty but the East Cheap Conduit is a celebration of so much more than merely making water available. 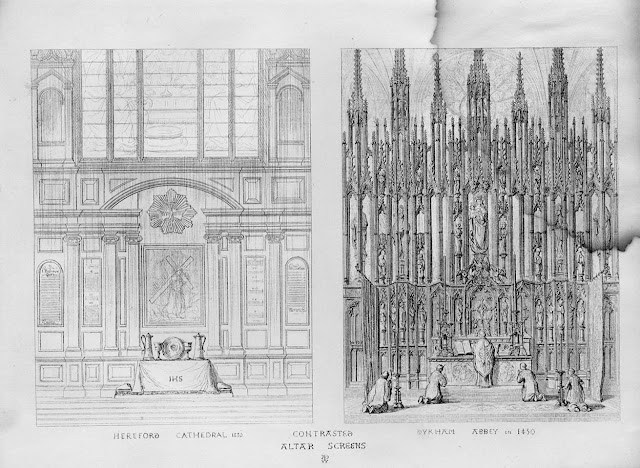 A friend hates the Fr Z catch phrase, "save the liturgy, save the world" but actually the liturgy, learning to acknowledge God and our obligation to him, is salvific, it places us in context, it changes the whole balance of society, it makes us human. 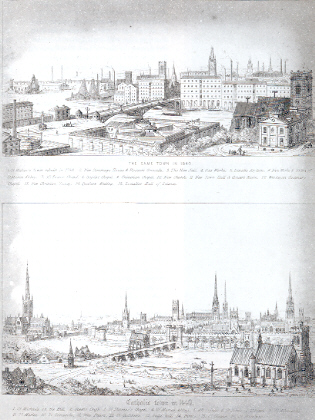 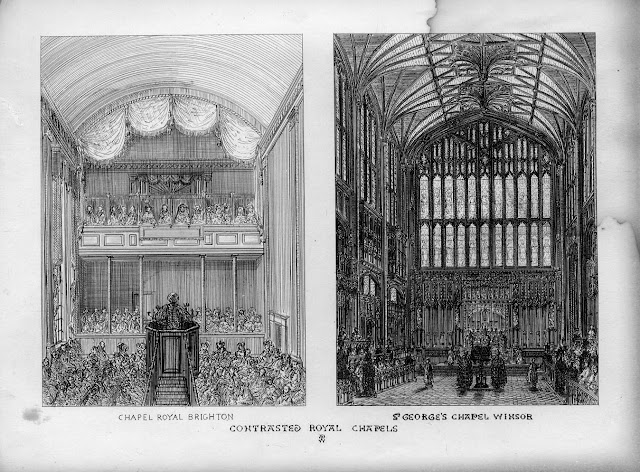 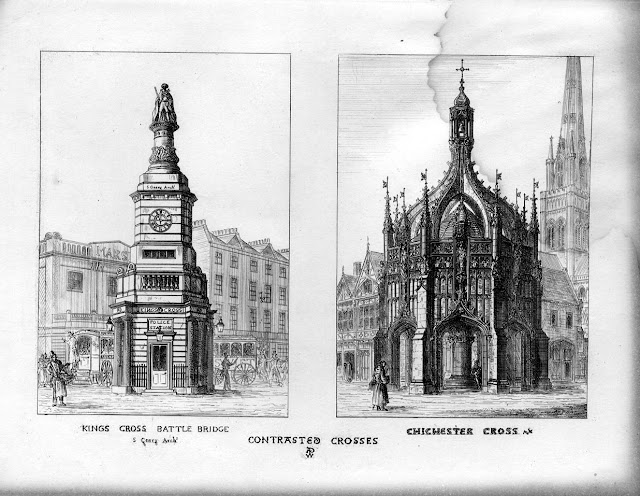 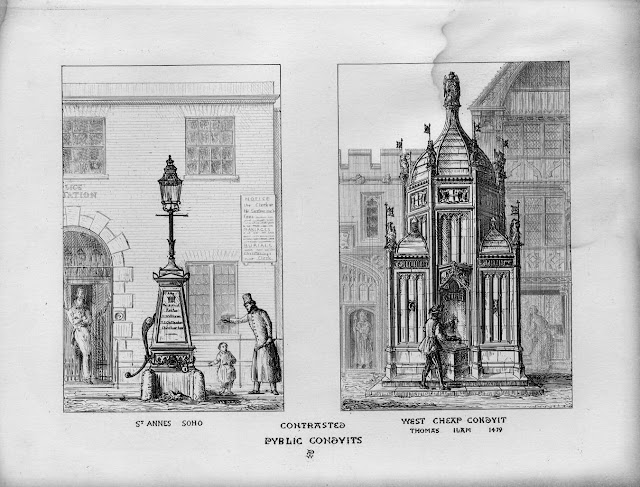 The age of faith is yet to come. Medieval life was brutish and short for the poor.

Amfortas, I wouldn't know I wasn't there but are you comparing the Medieval period to today or to Pugin's time?
I mean boys up chimneys, Dickensian filth, five year olds in the mines, work & poor houses give me Black Death anytime!

But seriously Pugin gives us a romantic, post-Scott, nostalgic view of the M/As coloured by the art of theatrical set designer, nevertheless it was highly influential, it was a basis for the political aspirations of the Arts & Crafts movement, and influential on and Fabianism, One Nation Toryism as well as Catholic Social teaching and to some extent Belloc and Chesterton.
It was a vision after all not a reality.

Father, can I ask where you've gotten the pictures from? Are they from a book by Pugin? They're fascinating.

TG,
They are from "Contrasts and True Principles of Pointed or Christian Architecture", A.W.N. Pugin but they are also available online

My rights arise when everyone else observes their duties. That is the only way we gain rights.

This is a mutual process. The individual has duties and the state has duties. If these duties are formulated in accordance with the principles of natural justice, and then observed, then the rights will naturally come into being.

Talk of rights in isolation from duties spreads false ideas. Citizens in the Soviet Union long enjoyed a constitution with all the rights anyone could wish for. On paper.

Catholic Social Teaching has addressed this question of duties but much work remains to be done. They have to be formulated precisely if they are not to be lost in the vagueness that characterises some of these documents.

"It was a vision after all not a reality."

It's worth pointing out that Pugin's dystopic vision of the "Modern Poor House" was equally far short of reality. No poor-house was ever constructed on the Benthamite "Panopticon" principle as shown in Pugin's illustration (and as employed in prisons). Which is not to say that the workhouse was not rightly feared by those who might end up subject to its less than tender mercies - and I have no doubt that the care of the poor in mediæval religious houses was far superior.

you need to read some William Cobbett.

I think there is a real problem with human rights as we have them to-day. An interesting commentary on human rights is Simone Weil's "L'Enracinement" 'Taking root or a Prelude to a declaration of duties towards human beings.'

She starts by saying that the notion of duty or obligation come before that of rights and comes from above - meaning the spiritual world. The men of 1789 did not recognise the spiritual world and that is where the French declaration of the Rights of Man is defective.

She goes on to point out that there is not much point in having a right to eat unless somebody else has the duty to give you food.

One of the problems with the present situation is the proliferation of invented rights and the resulting trivialisation of human rights.

Simone Weil suggests that you need to test the existence of a right by seeing whether it derives from an obligation. Thus for example from what obligation does the right to choose whether to kill your unborn child derive?

She also proposes a right to take risks! Not something our health and safety bureaucrats would like.

Human rights are important when one thinks of torture etc but when as now whenever a legal problem arises about anything one asks whether there is a human rights issue you trivialise those rights.

As a Jewess writing in about 1942 she is particularly interesting on Hitler and scientism. She says Hitler had a certain courage to take scientism to its logical conclusion i.e. that only force mattered and there was nothing else in the universe.

"The individual has duties and the state has duties. If these duties are formulated in accordance with the principles of natural justice, and then observed, then the rights will naturally come into being."

When I hear the phrase 'Human Rights' these days I automatically substitute the word 'Dignity'.

Thus a person should be entitled to a basic level of treatment and respect from others based on their dignity as a human person.

Our 'rights' are something in addition to that and are fulfilled hand in hand with social obligation.

Having worked in an environment where people vehemently insisted on their 'rights' quite frequently I do rather feel that the term has become abused and society has forgotten that it is a part of a social contract.

And whilst I feel that people should, in some cases, forfeit certain 'rights' for the good of society, they should never be reduced to a position where they are not accorded the respect for their diginity as a person.

Thank you, Father. I was hoping it's be 'Contrasts...' as it's a book I've had in mind to take a look at for a long time now.

One "right" that's gaining traction,we've barely seen the tip of the iceberg so far, and I suspect Brighton is a prime place: my rights to "freedom from expression of christain hate" ie from all public or private expressions of cristianity whatsoever, even from cristians themselves:inside they're hating.

Fr. Blake. In a fuedal society everyopne knew where they stood in the scheme of life. Authoprity and responsibility passed down from God through the Pope, through the King and through the parent. Today that hierarchy is jumbled and and inverted. No one is responsible to his neighbor.

Incidently the plate with the modern poorhouse is exaclty what the "Christian" designers of Eastern State Penetentiary built in Philidelphia. It did not work, because the inmates were isolated, and that caused depression. The result? Suicide and hopelessness. Sadly the situation has not changed much and incourageables are still confined to solitary.

The print of the ancient poorhouse, and the uniform of the inhabitant, looks like it is basically a picture of St Cross Winchester, so it was at least supposed to be like that (and was (or tried to be) except when the Master decided to run off with the funds, which happened at least once). It was the only almshouse of its scale (I think) to survive the Dissolution, though Thomas Cromwell told them they had to stop feeding beggars - part of the Foundation required them to feed 100 poor men each evening, and allow them to take away the leftovers. He said they were to stop and only feed those who were industrious or scholarly.

St Cross, Winchester, still looks like it does in the print.