Death to the World 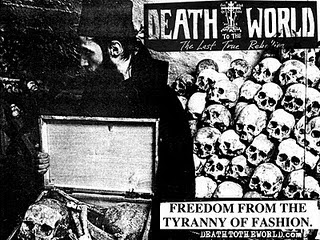 During a telephone call tonight I told an Orthodox friend one of my predecessors used to mutter, "they cry out for bread and we give them candy-floss". He told me about this rather radical Orthodox monastic evangelical initiative which I remember hearing about in the 1990s, here is Wiki link: a "zine" is a "fanzine" by the way.


Death to the World was started by monks and nuns from the St Herman of Alaska Monastery in Platina, California, as a medium of evangelism to teens involved in the punk subculture by monastics who were ex-punks. A founding member was Justin Marler who, soon after recording Volume One with seminal doom metal band Sleep in 1991, left for seven years of monastic life while Sleep went on to become metal icons.

Originally, the monastics planned to submit an article about Fr. Seraphim Rose to the magazine Maximum RocknRoll. They later decided to try to place an ad for their monastery, but were only rudely rejected, being told that the magazine "only [ran] ads for music and zines". This inspired them to begin a zine.
The first issue was printed in the December of ’94 featuring a monk holding a skull on cover. The hand-drawn bold letters across the top read “DEATH TO THE WORLD, The Last True Rebellion” and the back cover held the caption: “they hated me without a cause.” ... The first issue, decorated with ancient icons and lives of martyrs inside, was advertised in Maximum RocknRoll and brought letters from all around the world.
The 'zine continued to be published and distributed at punks shows and underground hangouts. It was estimated that at one time, there were 50,000 in circulation. The monastics put out 12 issues in all, after which they continued distributing the 'zine but didn't publish new issues.
Eight years later, the zine was revived by convert members of Saint Barnabas Antiochian Orthodox Church in Costa Mesa, California. New issues are submitted to the St Herman monks for editing and revision, and are released quarterly.
The zine had a considerable impact on counter culture youth during the mid to late 90s, which caught the attention of mainstream press, and quickly led to the release of Justin Marler's first book in 1997, Youth of the Apocalypse, (co-authored with a fellow monastic).

I wonder if something similar is needed today?
I just read there are major cutbacks in once Catholic Preston.
at November 11, 2011

The city emblem is that of the Papal Lamb and was once an extremely Catholic area. The diocesan priest, managing the downsizing, is guilty of hyperbole on a grand scale when he states that the congregations have been reduced to a level where they would all fit in to one church.

The St. Augustine's church referred to has already been reduced to some weird ecumenical centre. Catholic education has been greatly reduced.

On the A6 North if Preston centre is a road which reads: "Mosque [Christ Church]". Portent of things to come.

When we try these things, we generally get youth groups and guitars.

Sixupman: "Papal Lamb? I didn't know the Pope had one, God has. Do you mean the Lamb of God?

Evagrius: Yes, Death to the World, a definite alternative to candy-floss!

Is that what they call "shock therapy"?

I'd be among the first to say that if Faith and Love can be interpreted and spread within the media of music and dance or through current literarture trends, that's fantastic. But seminal doom metal? I was just getting to grips with the mention of Garage on the blog. I have no idea what seminal doom metal is, but I feel sure I'd prefer candyfloss!

Father, I have noticed the name Seraphim Rose with whom the monks were somehow associated. Oh... I think it is difficult to find a more anti-catholic writer. Fr. Seraphim Rose wrote rather much on death themes, daemons etc. But from what I read it seems he was more interested in devils than in Jesus Christ. These writings are also very notable for weird dark mysticism, spiritualism and anti-rationality. I think you could find his books in English too, perhaps they would be very informative if you are interested in studying sects ("trads-wing" sectants that are virtually absent in the Universal Church; compared with these, the most extreme sedevacantists look not sufficiently traditional).

As to the death of the world... I'd rather prefer the camaldolese tradition. I was told a story when a camaldolese hermit (Monte Corona Congragation) was told about the VII spirits and all the things, he was terrified, when the talk turned to SSPX it turned out that he was almost unaware of the whole issue because these hermits are really dead to the world and have absolutely no connections with it, nor even simple radio. In my experience, these black things, punk and heavy metal zines (with nice bones) are also a sort of candy, with the aim just to make some fanfare noise. The Lord is not in the fire, and after the fire a whistling of a gentle air (1Kings).

Some years ago when the 'football pools' were popular there was a TV programme about some of the winners. Included was an old Irish priest, Fr. Curtin (now deceased) from the Midlands. He said that he had prayed to Our Lady about the parish school debt and urgent church repairs and sent in his entry (the only one he ever entered) and won enough to pay all the debts and carry out the repairs and give some to poor relatives. He told the incredulous interviewer that he was certain that his entry would win! What faith!

lizard, that's an interesting comment. As I recall, the punk bands were mainly propped up by the big record labels, and the aesthetic by... fashion brands, albeit minor ones.

Which is rather why I find these sorts of 'counter-culture' straddle the border between comical and pitiful.

Evagrius Ponticus -- yes, I tend to agree. Another point is that these and similar subcultures have very significant destructive element and tendency to seek "liberation" from all external pressures. Philosophically, it seem to involve tendency to destroy the world, strong opposition to the world for the sake of oneself, liberating oneself, promoting the impulses that in traditional theology are considered "passions" with which we must struggle. This is totally opposite to the Catholic doctrine, where death to the world involves giving oneself totally to the Lord and to the neighbour, (one)self-mortification. As, e.g. Mother Theresa of Calcutta, giving herself to the smallest and most outcast of our society. I do not think it is productive and good to play with these things. It was noted that the zine had a significant "impact" on the society; what were the real fruits of this impact? Was it penance and change of life, turning to God? Or just buzz?

Hello Fr Ray: The Lamb and the initials of PP stands for Proud Preston (in Lancashire). The Lamb has always been known as The Lamb of God. It is true what Sixupman has said about Preston and areas being 'extremely Catholic' Well it used to be and I know the area well. Bishop Michael Campbell of Lancaster, has boldly implemented the clustering of parishes, which will commence at the end of this month. Not too long ago the Archbishop of Liverpool clustered parishes within his archdiocese. I suppose many other Bishops will be implementing the same measures. Is this what the future holds for Catholics in many dioceses? Sounds bleak to me. I sympathise with Priests and laity who have to see the closure of their beloved Church. It must be a dreadful moment that is painful. I also feel sorry for the Bishops who say the final Mass in the Church that is to be closed. Also on Sixupman's comments on the reduction of Catholic education is a real concern and needs to be addressed. How many Education Departments in the diocesan Curia have strictly implemented the Friday No Meat Fast Rule? Is this being implemented or is the ED of the Curia saying that it is the child's choice? Why have a rule if it is not being implemented? How does the child learn the rules of the Catholic Church if the Catholic School is not following the Rulings of the English Bishop's Conference? Why have Catholic in the title of the school?
My compliments to you Fr Ray.
Kinga Grzeczynska

StevieD
I knew Fr. Curtin - he was a real saint. Everything he had he gave away as his parishoners were very poor indeed, especially in the '80s when I knew him.
I had forgotten the story of him winning the pools.
Thanks for the reminder.

Forgive me, but you could not be more wrong about Fr. Seraphim Rose. He was a great thinker and had an acceptable intellectual drive, yet he subjected this to his heart, to gain the wisdom of the desert fathers: this was not "anti-rationality." Sometimes we need to unlearn the knowledge of the world to gain true wisdom. I will say however that you are right in saying he was an "anti-Catholic" writer if you are to follow certain modern "progressive" views like Merton's. Fr. Seraphim stood for traditional Christendom. He respected the Catholic West, but did write against it when he felt it proper to; when he felt it had deviated from its traditional values. He wrote several letters to Merton begging him not to stray towards eastern mysticism. The man gave up all he had for the sake of the Gospel, it is ludicrous to say he put anything before God. Visit his monastery where he reposed and you will not say otherwise.

DTTW does not promote a destruction of the world from a selfish perspective. The quote from Saint Isaac of Syria upholds the name as an ascetic practice: death to the passions. It is crucifying oneself, which is very much in line with Catholic doctrine (or at least should be).

The agenda of the 'zine is to bring Christ to punks, skins, death metal heads, hippies, etc. (i.e. the refuse of the world). Oh! And what a shocker! They make extremely zealous Christians! It is very true. The philosophy "lizard" tried to explain is exactly the same that fuels these subculture kids towards a traditional and ascetic Christianity. DTTW's agenda is to take these destructive and rejective passions found in these young adults (mostly because they are broken people), and encourage them to harness them for good: destroying the passions and rejecting the world for a greater truth than what is fought for in the punk scene: Christ, the ultimate Truth.

Yes, it is a great ministry. I have seen people transform from it. It is not promoting a "candy"... there is blood in our zines, the blood spilt by martyrs. It does not promote a fake smiling american god, but our true Christ is all His transcendent glory. People pick up a cross from it and endure suffering for Truth.

Sincerely,
Death to the World Editors

I have often thought of coming up with something similar myself - I love Death to the World, they are an amazing witness to Christ in a sinful world.

I'm wearing the T-shirt of the monk holding the skull of his elder right now actually.