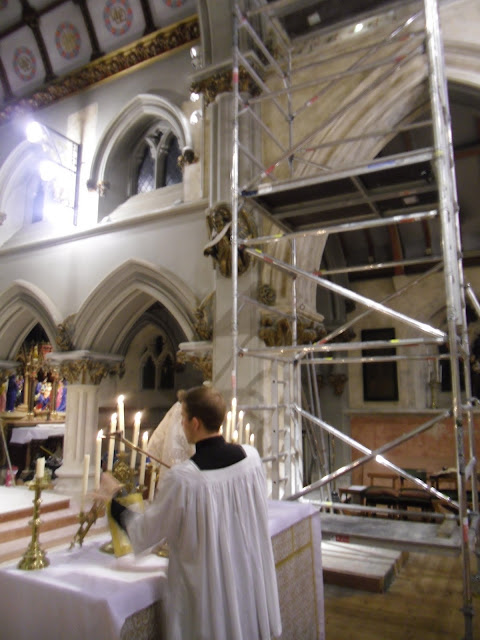 Over the las few weeks we have been celebrating Mass and everything else in the nave. The altar has been moved so the new sanctuary floor can be laid. The pulpit has been dismantled and has been cleaned of its grey paint and a massive tower has been next to the altar so more paint can be cleaned from upper walls.

Here is a picture looking down the work which has been done during the week. 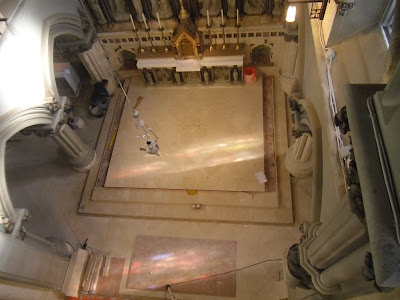 Look at what was done to the altar in the 70s, it was simply hacked away from the wall the decorative front was put against wall - badly and the end of the mensa was lopped off and placed under the tabernacle. The mensa was placed on some ghastly legs and place on the old communion step, just behind where it is in the first picture and between the two pillars at the bottom of the second picture. 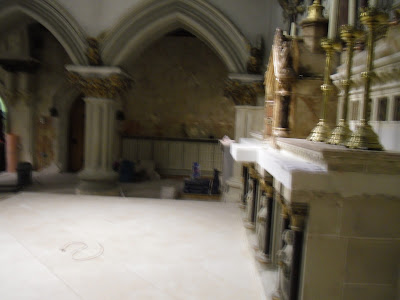 Traditionally an altar should be rooted to the rock, now, a permanent altar is simply one that is for some reason unmoveable. When it is finally put back in place, it will be unmovable solely by its weight and the fact it is fixed to the floor, which is less than ideal but is the best that can be done.


The last picture is Rado who has been paint removing with a passing angel on top of the tower - too high for me, I don't do heights well. 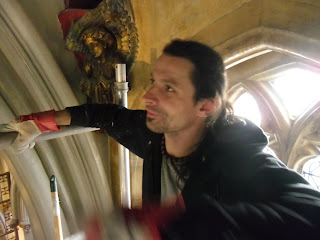 Good on you, Padre.

A place worthy of the Blessed Sacrament.

A similar thing happened at our cathedral (before we were a diocese...it was a church at the time) in the 1970s. While the pastor was away, the nuns attached to the church brought in construction crews with jackhammers to remove all the marble altar fixings, etc. It makes me weep.

Better than some in the U.S., though. some churchs had removed marble altar rails and turned them into "car stops" in the parking lot. I can't fathom such a lack of....sense for want of a better word.

I can only think that the people who were responsible for the dismantling, who received authentic formation and who knew the Latin Mass, must have harboured a great dislike and disbelief for the Catholicism they received to be able to throw it all away so lightly and to act with such ferocity towards the fixtures of the churches which reminded one that the church was the house of God and not just a meeting hall.

Hello Father<
I am just astonished by the damage to your high altar! Belmont Abbey did something similar and it was a Pugin altar! Perhaps you should have a dnation button so readers can help you. Father I think you are an admirable man...keep up the good fight. Regards Chris

Very nice. And where exactly is the altar going? This is just a rhetorical question. Please don't say, but there is scope to give a lot of people a pleasant surprise.

Wouldn't it just be a lovely idea to set the altar back at its original position and have a portable altar forward of it. Just thinkin'.

Dear Father Ray, your piece reminded me of Nathaniel Woodard, founder of Lancing College just along the coast from you, a great Anglo-Catholic educator in the days when Protestant rules suggested that Holy Tables should be moveable so that they wouldn't be confused with those horrible papist altars. Contemplating the large, heavy, all-stone altar that Woodard had installed in his Chapel (that great cathedral-like edifice on the South Downs near Shoreham ... open to the public), the Archdeacon enquired whether it was moveable. "Six horses dragged it in and six horses could drag it out again" was Woodard's reply.

The altar is still where Woodard put it ... having proved too heavy to fall victim to the post-conciliar fads.

Your proposed arrangement of a fixed stone altar constructed away from the wall (and reredos) so as to allow for Mass facing the people whilst at the same time facilitating celebration ad Apsidem as well is to be applauded as a model for any church considering updating its Sanctuary. I wonder Father, is the Art and Architecture Committee of the Diocese as committed as you are to ensuring that any proposed reordering allows for a worthy and proper celebration of both forms of the Roman Rite, which in the light of Summorum Pontificum it necessarily should? If so then it ought to insist that any proposed work done to any Sanctuary from now on should incorporate the raising of the altar onto three steps to allow for Solemn Mass in the EF as your scheme has so cleverly and sensitively achieved.

Many of the priests who organised this in the 1970's have since been made bishops ...

Your item below about Pugin reminds me that the abbey church he designed at Ramsgate suffered from the iconoclasts.