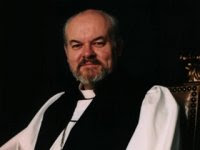 There is a rather interesting extract from Dr Chartres the Anglican Bishop of London on the new translations of the Roman Missal, for those of us who know of many Anglicans who use both the Roman Missal and Lectionary, his words may seem a little hard, especially for those who have claimed they are "Catholics" but in the CofE.
The great Peter Amigo, Archbishop of Southwark for the first half of the 20th Century met a  High Anglican on a street who said, "I am an Anglican but I consider myself a validly ordained Catholic priest and I accept you as my real and legitimate  bishop". The Bishop replied, "In that case I suspend you. Good day!"

The Pope has recently issued an invitation to Anglicans to move into full communion with the See of Rome in the Ordinariate where it is possible to enjoy the “Anglican patrimony” as full members of the Roman Catholic Church. Three priests in the Diocese have taken this step. They have followed their consciences.

For those who remain there can be no logic in the claim to be offering the Eucharist in communion with the Roman Church which the adoption of the new rites would imply. In these rites there is not only a prayer for the Pope but the expression of a communion with him; a communion Pope Benedict XVI would certainly repudiate.

At the same time rather than building on the hard won convergence of liturgical texts, the new Roman rite varies considerably from its predecessor and thus from Common Worship as well. The rationale for the changes is that the revised texts represent a more faithful translation of the Latin originals and are a return to more traditional language.

Priests and parishes which do adopt the new rites – with their marked divergences from the ELLC texts and in the altered circumstances created by the Pope’s invitation to Anglicans to join the Ordinariate – are making a clear statement of their disassociation not only from the Church of England but from the Roman Communion as well. This is a pastoral unkindness to the laity and a serious canonical matter. The clergy involved have sworn oaths of canonical obedience as well as making their Declaration of Assent. I urge them not to create further disunity by adopting the new rites.

There will be no persecution and no creation of ritual martyrs but at the same time there will be no opportunity to claim that the Bishop’s directions have been unclear. All the bishops of the Diocese when visiting parishes will celebrate according to the rites of the Church of England allowing for permitted local variations under Canon B5.

Setting aside for the moment the first sentence of the Bishop's third paragraph ("At the same time …", with its somewhat debatable implication that the "hard won convergence of liturgical texts" should have been stuck to), it is hard to fault the logic of the rest of what Dr Chartres says.

As a "high" Anglican myself - not about to join the Ordinariate, though I wish well to those who have felt called to take that step - I do wonder what justification there can possible be for clergy who have decided - one presumes in good conscience - not to join the Ordinariate, nonetheless to adopt the rites of the Church whose claims (some of them implicit in the rites themselves) and invitation into communion they have rejected. Is the Bishop not right to say that they "are making a clear statement of their disassociation not only from the Church of England but from the Roman Communion as well"?

" Is the Bishop not right to say that they "are making a clear statement of their disassociation not only from the Church of England but from the Roman Communion as well"?"
Yes.
They make themselves 'little popes' as Luther himself once said I believe. Just the same old Protestant heresy!

"I do wonder what justification there can possibly be for clergy who have decided ... not to join the Ordinariate, nonetheless to adopt the rites of the Church whose claims and invitation into communion they have rejected."
A Catholic in the C of E does not necessarily decide not to join the Ordinariate, he may just not decide to join; in which case the existence of the Ordinariate makes no difference to his situation. He does not need to "adopt the rites" of another Church, if he sees traditional Catholic rites as belonging to him as a western Christian. And the "invitation into communion" has always been there, as have the reasons for accepting or refusing it.

There are no new rites, dear Bishop. Just a new translation.

Thank God the Catholic Church is not continuing 'building on the hard won convergence of liturgical texts' with the protestants. I hope we have had enough of that already.

Our Liturgy should have never be adapted to suit those outside the Church. The fruits of this cross pollenization have been a loss of Catholic identity.

Fr Ray, let us welocme with sincerety the Priests who have joined us from the CofE. I for one think that this is a very positve move and I am grateful to see this develop. The reasons to make this move for the individual member of the clergy may be too complex to discuss or even understand. I think that there will be more moves like this to the Ordinariate from the Anglican Church.
FrSM

It seems that there will be more ordinariate groups formed from parishes within the C of E Diocese of London.

Let us welcome them.