The Pope on His Friend 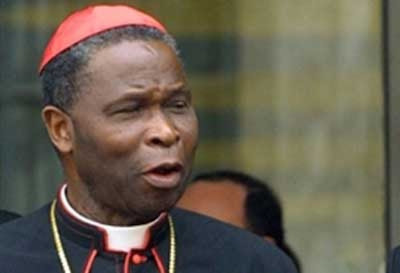 The Pope on his friendship with Cardinal Gantin in Benin, first on the plane.


I saw Cardinal Gantin for the first time at my ordination as Archbishop of Munich in 1976 [sic -- it was 1977]. He had come become one of his former students was a disciple of mine. That had been the beginning of a friendship between us, without our having met. On that important day of my episcopal ordination, it was beautiful for me to meet this young African bishop full of faith, full of joy and courage. Then, we worked together a great deal, above all when he was the prefect of the Congregation for Bishops and then in the College of Cardinals. I always marveled at his deep and practical intelligence, his sense of discernment, to not trip over beautiful ideological phrases but to grasp what’s essential and what doesn’t make sense. He also had a true sense of humor which was very beautiful. Above all, he was a man of deep faith and prayer. All this made Cardinal Gantin not just a friend, but an example. He was a great African Catholic bishop, and I’m truly happy now that I’m able to pray at his tomb and to feel his closeness, his great faith, which will always make him an example for me and a friend.

Then during the welcoming ceremony.


There exists a third reason [I have come here] which is more personal and more emotive. I have long held in high esteem a son of this country, His Eminence Cardinal Bernardin Gantin. For many years, we both worked, each according to his proper competence, labouring in the same vineyard. We both happily assisted my predecessor, Blessed John Paul II, in the exercise of his Petrine ministry. We had many occasions to meet, to engage in profound discussions and to pray together. Cardinal Gantin won the respect and the affection of many. So it seemed right that I should come to his country of origin, to pray before his tomb, and to thank Benin for having given the Church such a distinguished son.

Fr Ray; The Holy Father seems very moved to be at his friend's Tomb. Let us remember that our contact with our family and friends may finish at any moment that God choses. In heaven we resume and are reunited to our nearest and dearest. God is with us from the moment of our baptism onwards. As The Holy Father treasures his friendship with the Late Cardinal, let us in the same way rejoice about our friendship with God.
FrBT

Mr. Gene L. built a Church in Denver, Colorado http://www.saintisidore.org by selling 2 1/2 million dollars worth of his property.

He was a very humble man.

To see him at Mass you would never know he did this, and much more when called upon by the Padre that was his Priest and Confessor.

His funeral Mass will probably be Monday or Tuesday.

Please remember him in your prayers.