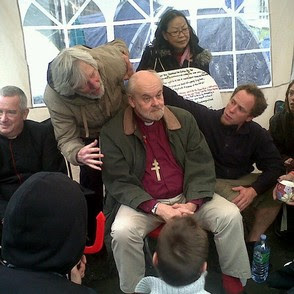 I am not good at the "What would Jesus do?"
The more one knows him the more unpredictable his actions are, I know he would not do what I would expect hi9m to do, if he did he wouldn't be God, just an interesting historical ethical teacher, which he isn't.

I've been fascinated by the shenanigans at St Paul's and the rather inarticulate ramblings of some of the CofE's leading thinkers. One of my erstwhile parishioners quoted this gobbet by ex-Canon Chancellor Giles Fraser, a BBC favourite, “I think that, in a sense what the camp does is that it challenges the church with the problem of the Incarnation – that you have God, who is grand and almighty, [who] gets born in a stable, in a tent. You know, St Paul was a tent maker. I mean, if you looked around and you tried to recreate where Jesus would be born – for me, I could imagine Jesus being born in the camp.”


What seems to be happening at St Paul's is an attempt to neither upset bankers or protestors, what we can say Jesus would have done would be to offend both groups, at the end of the day both groups would have shouted, "Crucify him", because his Kingdom is not of this world. Virtue is often found in the moderation of the via media but Christianity is always the third way, the Narrow Way.

What Christ is concerned about is our relationship with God, "rendering unto God the the things which belong to God". When Christianity starts getting too involved with Caesar it always comes of second best, just think of the Church here and its involvement with the previous government. As salt, as yeast, as light the Church has a great deal to say and perhaps having spent 2,000 years meditating on death, judgement, heaven and hellwe know what is important. To both bankers and protestors we have a most singular message: Jesus.

Fr Stephen Langridge suggests that Jesus "[h]aving already pitched his tent among us, I suspect he would be continue to call men and women to repentance. However, I think we know what St Paul would do. When he went into the Areopagus St Paul didn't say to those present, "I stand with you". He latched onto something they could relate to and used it to proclaim Christ. That's the model of the first evangelisation of Europe and I suspect it will need to be the model of the New Evangelisation as well."

Evangelisation is about listening but it is also about having something to say. The Anglicans (and Catholics) seem so anxious to listen but like Paul having heard, Christians have something to say. Our message isn't about ending greed, multinationals or world hunger, it is about occupying heaven and saving souls.
at November 02, 2011

The question is not so much about guessing what Jesus might have done; rather the question is what should we, the Body of Christ, do. Personally, I don't see why we need to do anything at all about the tent protesters. They are protesting without harming anyone as far as I can see, though I can't work out what their demands/requests actually are. We should be asking ourselves how to live honestly in a corrupt world, and then doing so.

The question is not: "What would Jesus do?"

The question is: "What is Jesus in fact doing?"

Probably the most articulate bunch of protesters we have seen for a long time.They wanted originally to occupy the Stock Exchange but finished up where they are by accident.

The cowardly bunch of Secondhand Car dealer spivs who are supposed to be running the country are keeping quiet.

I do not know what exactly the protesters are proposing but certainly I think the Church should be contributing to the debate. There is surely something to be said about greed, usury and gambling - difficult subjects upon which some light needs to be shed but they are key to the abuses that have been taking place in the city that have given capitalism a bad name.

Our message isn't about ending greed, multinationals or world hunger, it is about occupying heaven and saving souls.

Cannot agree more with that statement Fr Ray, and it is so heartwarming to hear it. I think Our Lord would be on the of side of integrity and that would not nessessarily be amongst the demonstrators.

Only He can trace the flight of an Eagle.