Death: How to Do It 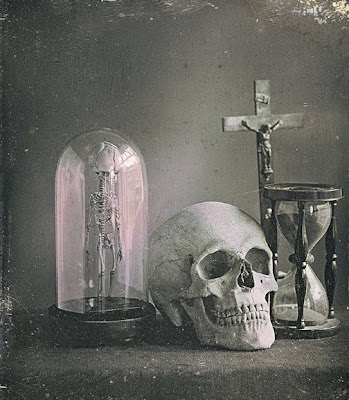 The debate about assisted suicide, the whole issue of communicating with people who are "shut in" reminds us that though most people have little fear of death, we all have a fear of the process of dying.
For a celibate priest there is little chance of me dying in my own bed, it is either a quick heart attack or following my mother, a rather hideous long drawn out death of alzheimers and hospital infections in a broken leg which remained unhealed for three years, or like my father, whose first anniversary is at this time , who died in hospice.
It is the lack of control, the dependency that rather frightens me, more than pain. I would certainly want to be spared from officiously being kept alive, a doctor's skill is perhaps more of a threat than a blessing today. I can sympathise with those who think of suicide, I can understand the fear of a loss of dignity, of being confronted by a process that has become increasingly institutionalised. It is rational to want control of one's death, it is after all MY death not someone elses.
Our faith should have something to say not just about legislation concerning dying but the process of dying itself. This week we have celebrated Saints Blaise, Agatha and today Paul Miki and his companions. Martyrdom and martyrs teach us something supremely important about heroic death, not just for those who die in the hatred of the Faith but simply for those of us who one day must die.
Not only do the Martyrs commend themselves into the hands of God but also the hands of their tormentors. They are models for us, whether they die in their own filth alone, forgotten, in a prison cell or naked, humiliated in the gaze of others, their deaths are models of our death, they remind us of the lack of control we have over our own end and of the necessity of accepting what Providence may send, of the importance of dying heroically, with inner dignity and in the Lord, whatever may come.
For centuries Christians prepared themselves for the agony of death by meditating on those who willingly accepted death for Christ, their example gave the courage to pray to be delivered "from a sudden and unprovided death", what many now call a "good death". That is quite the opposite of what Christian's understand by a "good and holy death", how dreadful for us to die without Confession, unconcious of the sacraments, without the prayer of Holy Church.
We need to teach people not only how to live but how to die, to die in the Lord.
at February 06, 2010

I like your thoughts on this subject & think you have it exactly right! Well then!

My uncle died today, having received the Last Rites at home with his family all around him after having suffered patiently for a long time with leukemia. May he rest in peace. There's a lovely woman in Australia who was due to give birth a couple of days ago who has an online 'prayer garden' for people to pray for all sorts of intentions - beautiful:
anyone can join

Don't know if you've seen this article in USA Today, but you get a mention and a link to your blog.

I think you put that very sensitively and well, father.

For myself it's the thought of the finality, the no-turning-back if you change your mind about assisted suicide which terrifies me.

I've heard that George Galloway MP was very good when this subject came up on Thursday's Question Time. I shall look at it on iPlayer.

Red Maria - there was a very nice moment when Melanie Phillips graciously accepted George Galloway's acknowledgement that he totally agreed with her on assisted suicide and euthanasia. If those two can agree on something, there's hope for the future;)

I think the late JPII was a shining example of how one should comport oneself. No matter how we die, we are to trust in the Lord. Easy to say, hard to do. We must always be on guard to be in a state of grace.

As an itinerant organist I hear many funeral addresses/eulogies/sermons ranging from (an Anglican priest) the absolutely superb to (a layman)utter nonsense. For me, personally, the most difficult to play at was for someone I had known slightly when he was a child and whose (long divorced) parents I had known well. He had suffered from severe depression and taken his own life when still in his early 30s and it was totally by chance that I was asked to play for the funeral, having heard of the death whilst at Walsingham. I found that terribly distressing, spending a long time pondering what may have caused the depression and how it might have been avoided.

With my own parents I can pin-point exact days when they clearly gave up wanting to carry on the struggle any longer (being quite ill) and each died very shortly afterwards. My own feeling is that the medical teams spent a lot of time and effort trying to achieve objectives that my parents did not want and, clearly, were unable to cope with, physically or emotionally, any longer. I would not want that to happen to me.

I think, Fr ray that you have got your own comments just right.

I do agree with what you say about the fear of the process of dying being the greatest of all.

I believe that for many people the problem is that they do not feel they have a right to 'let go'. I'm sure every priest has encountered people struggling desperately to stay alive (and thus making the whole process so much more agonizing) who, once the Last Rites have been performed, feel free to 'Go Forth in Peace, Christian Soul . . .', and make good deaths.

I am sure that it is a tremendous fear of death in today's irreligious world which underlies the fight to hang on to life at all costs, even when one is ready to die; a fight which, I believe, greatly magnifies the trauma of death for many; both those dying, and those around them.

Perhaps that is a particular area in which the Church should be helping modern mankind.

I agree with Melanie Phillips about the John Terry sacking as well - I know George didn't.

I have no interest in football at all, you understand. But when Melanie described his behaviour - yeurghhh - I thought this man must be sacked. People like him are role models for the young and if the young see that such behaviour is considered acceptable they can't be blamed if they ape it.

This debate has certainly given Debbie something to live for.

The big problem is how to ensure that that we are not going to be "bumped off"for "bed blocking".

The way it is in this country is that anybody sent to a Nursing Home suffering from an incurable illness has to pay for it and that is usually from the childrens'inheritance,usually a house has to be sold.

I am against the assisted suicide or euthanasia. The why is this: life means to be, death means not to be, and between to be and not to be I opt for the former.
When the death does not affect the person who is speaking or writing about, it is easy, very easy to say: why to worry about the death? It is a natural process! But when the death comes and knocks at your own door the things change. All my life I have been feared death. Nevertheless the fear of the death not always is negative. In my case it started my spiritual quest of searching for God, the immortal soul, the mind, the life after the death. Because of this quest I began to travel and in these travels I came across to many extraordinary people who helped me. These encounters were in Rome, in London, in Paravati, in New York and so on.
The book I have recently written deepens many religious issues. I want to draw it to your attention, as you may be interested in it. The title is “Travels of the Mind” and it is available at http://www.strategicpublishinggroup.com/title/TravelsOfTheMind.html
If you have any questions, I am most willing to offer my views on this topic.
Ettore Grillo

Not while I'm alive you won't.

Fear of where we will go is greater than death itself. What I have read about purgatory is really quite frightening.
Suicide is not and has never been an option. The thought of a humiliating death is something we pray that we will be spared from but what does it mean when we pray to St Joseph for a good death?. If we suffer a slow death and offer it up for the love of God does it not mean we will be spared some time in purgatory?
Your thoughts are very sensitive Father and certainly reflect mine and many others who read this blog. Thank you.

First may I take this oppertunity to commend you on your work for the restoration of our faith, you are a shining example of what a priest is, or at least is supposed to be, may God bless and keep you in your work for the church.

Secondly, your thoughts on this topic in specific hit home. My Grandad, who taught me that our holy faith is not something external, or a superfical aspect of human life, rather it is a way of life. He lost his battle with cancer last year on the morning of the 19th of Novemeber. At his requiem, our then parish priest noted too the importance of dying a 'good death' - my grandad recieved extreem unction five times, the last being the night of wednesday the 18th. It is my supreme hope that the graces of this same sacrament, prepared him well enough to stand before our good God.

We often forget, more especialy in this day and age that death awaits all of us , both the old and the young. I understand death now in a greater way as apposed to the way in which I viewed it prior to his illness and death.

I thank God for his love, and for this same understanding -


Please be assured of my prayers for yourself and your work for the salvation of souls, if I may ask that you remeber myself and my intentions as well dear Father.

Talking about suicides etc... I thought this would be very apt.

Here is a link to a fantastic new song that is taking the American Country and Western scene by storm! Pro-Life!!!!! You ain't heard or seen nothing yet folks.

Promise you that you will be reaching for the 'kleenex' within moments! Very uplifting!!!!

Bet it never gets any 'air-time' in the UK.