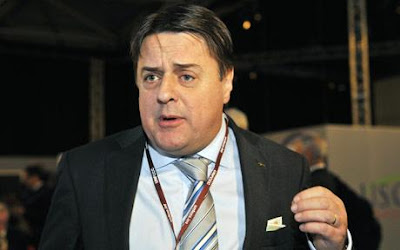 The barrister Neil Addison imagines the scenario of the odious Nick Griffin applying for a job with the Labour Party and being interviewed by Harriett Harman:


“Well Nick you certainly have all the qualifications and experience that we require to work as a Media advisor to the Labour Party. However because of the nature of the job and the fact that you will be working closely with Labour MP's I would like to ask you some questions. Are you a member of the Labour Party ?”

“Frankly Harriet I don't see how that question is relevant to my ability and qualifications to do the job.”

“Well you see Nick because of the type of organisation we are we need to know that all our staff comply with our values and principles so I must ask you once again are you a member of the Labour Party ?”

“Since you ask I am a member of the BNP but that won't affect my ability to do this job. My membership of the BNP is a purely personal matter”

"That Harriet is nothing more than prejudice and Discrimination. I will sue you in an employment Tribunal"

Can Griffin win?
Well no, because the Labour Party, unlike religious groups would have been exempt under the Harman legislation. See Neil's blog for an explanation. Harman's legislation wouldn't have allowed us to refuse him employment!
I have added Neil's Religion Law blog to the side bar.
at February 14, 2010

I can't see why the Labour Party would have any great objection to employing the BNP leader - they do not seem so far apart in their underlying orientation. They both appeal to the lowest motives in the electorate.

It is the first time I have come across the Religion Law blog and it does make for interesting and informative reading. I shall certainly be reading it in future.

I have learnt from it that it is entirely a myth that the PM of England cannot be a Catholic and the fact that Tony Blair waited to convert until after he had left No 10 helped to perpetuate this myth.

Physiocrat;
you could even argue on more solid grounds than that - most of Labour's immigration policy over the last ten years has been solidly aimed at letting whites in, and keeping coloured people out. They would deny that, of course, but res ipsa loquitur.

Is Griffin's ideology all that far from the pro-Petain views of the French section of the SSPX? Nowadays he does not deny that the Shoah took place or seek to minimise it if he reluctantly concedes that it did.

"the PM of England"

But by all means campaign for English independence. I wish you the best of luck.