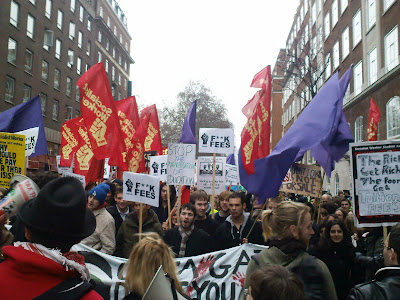 A pretty cunning plan from Paulinus: take over the National Secular Society.
As Paulinus says the NSS, never reveals its membership and probably punches well above its weight, he suggests it wouldn't be too difficult to get a few hundred Catholics to join it and take over - have they got nice offices and plenty of dosh in the bank?
It is a good Trotskyist ploy, when I was a student Trots would join a peaceful demonstration hand out plenty of banners with their logo on it and claim it as their own. They almost pulled it off with Old Labour, . Stonewall followed the same tactics infiltrating the media and the law in the 80s and 90s. In a way I suspect this is what lay behind Harriett Harman's Equallity Bill; weakening the churches by making them employ non-believers- not with ministers of religion in mind, she had given her word after all, and we all know how much we can trust our politicians, don't we?
As other people have suggested The Labour Party would not welcome BNP members, I suspect it wouldn't welcome Catholics any longer, though we were the mainstay of it for years before the pro-abortionist forced us out. Frankly nowadays it wouldn't be too difficult for a group of Catholics to take over a local branch of the Labour, or a trade union or Catholics 4 a Changing Church. It isn't just active involvement in Churches that is falling, it is active involvement in any organised group, many such groups run with an active involvement of a dozen or so. How wonderful to have a local Labour Party that was Pro-Life and Pro-Catholic.
All one would need to do is organise, and as the Pope said to the bishops, we might well find we are "giving voice to the convictions of many people who lack the means to express them: when so many of the population claim to be Christian, how could anyone dispute the Gospel’s right to be heard?"
at February 04, 2010

Nice idea, but rather like Baldrick's cunning plans totally impracticable. If Chris Gillibrand's petition http://tinyurl.com/yljc43d in support of the Papal visit - to counter the National Secular Society's "Make the Pope pay" petition with currently 13,676 signatures) - and which involves no loss of time or hard work whatsoever, can get only 644 signatures (at 22:08), I cannot see sufficient eager Catholics organising sub rosa to do this.

Membership of the NSS is £29 per annum. I think the plan needs to be somewhat more cunning.

Patricius - Are you recommending we move to cunning plan B????

Father, great idea but Londiniensis beat me to it.

Just look at the petition for what if we just said wait now upto 14000 odd signatures. The we've waited long enough petition just over 4000.

Anyway on another note - I met your organist at the Chant meeting in London on Saturday last. What an excellent lady she is. You've got a good'un there as we say in Lancashire. Treat her well (I'm sure you do - she was very complimentary about you.)

The problem with petitions like Chris' is they tend to show weakness rather than strength. Hence I am not in favour of them.

The NSS has carefully crafted their petition by introducing the idea of not wanting the state to pay, especially in today's economic climate, the alleged wealth of the Church and English anti-Popery, plus a few more ideas. Clever and well publicised!

Isn't there a Catholic Saatchi & Saatchi, or whatever?

How does one go through the NSS version of the RCIA programme? We need to find out when their enquiry meetings are and then pay a visit. You're going to need someone slimier and more sinister than Peter Mandelson for this to work.

Obviously, i don't want to blow my own trumpet, but I may just be the man for the job.

Though not in favour, I have just signed it.
But it is best it is not taken too seriously, lest we are compared to the NSS and are found wanting.

L.E.
You are slimey and sinister?
No.

I'm not signing the petition because I think they're mostly utterly pointless, and often silly.

Actually doing something is another matter.

I see Donald Duck, Martin Luther, and various other distinguished personages have signed the NSS petition.

Does the NSS not realise that the Pope's visit is a STATE visit. He comes at the invitation of the Prime Minister so, of course, the State pays. By the way, Father, I think that you should only refer to Harriet Harperson in future.

I like the idea of entryism but it needs to be thought through. The first step is to get a copy of the organisation's constitution or Memorandum and Articles of Association, and go through it with a fine-toothed comb, preferably this should be done by someone with a background in the legal profession.

It's a task for a pernickety old fool like me, but I don't have the professional knowledge.

Probably the daftest idea we have heard about for a long time.

The best way to treat these attention seeking misfits of society is to totally IGNORE them,they will just wither & die. They do get plenty of publicity from the Porn-Mongering press and the BBC.

You will never win an argument with an Ignoramus.

I think you're all missing the point. It's a thought experiment for the secularists. What they are proposing is that an organisation (the Church) should have to employ people in positions of power, influence or responsibility who have views or a lifestyle in complete opposition to major tenets of that organisation.

I'm inviting them to reflect on how that might work if applied to them.

"It is a good Trotskyist ploy, when I was a student Trots would join a peaceful demonstration hand out plenty of banners with their logo on it and claim it as their own"

IIRC, Father, you also said it was a good move to grab control of the bullhorns. :-D [you old, yippy you!]

Should it involve signing any atatement of adhesion to the aims of the NSS then no honest person who did not share them could with a clear conscience join. However one might make a case for Christians to reclaim the Labour Party, the party of Attlee, Cripps and going further back Wheatley.For those who shared its general economic aims this would not prove difficult, as many branches are miniscule, and the recent secularism is enforced by a small minority which could be defeated. Branch resolutions going up to a Labour Conference in favour of the moral views held by the Labour Party before the 1960's might have some impact. Is this wishful thinking?

I believe that the ruler of Saudi Arabia, who is a religious figure in Islam as well as a Head of State, has been to England on a State visit. Why did the NSS not object to the cost of that? Are they selective in their religious targets?

Indy: The NSS are probably afraid of head-hackers.

What is a "Head Hacker"?

I get the impression that the NSS are just sad people with nothing better to do but if they think religion is irrelevant why can't they just ignore it?

I wonder if members have to sign something if they want to join. Must check on their website. Apparently they have a song book called Gather or something like that, which make me wonder if they would not actually be quite happy in a Catholic parish where they do the clapping Gloria and hymns by Bernadette Farrell.

This is the Statement of Aims of the NSS

The creation of a just and equitable secular society in Britain

The National Secular Society seeks a society in which religion and the State are distinctly separated, and where human rights always take precedence over religious demands. We would like to see the following ten objectives incorporated into a written, secular constitution

1. There should be no established state religion.

2. The state should not fund religious activities.

3. The state should not fund religious proselytising in any form and the provision of all services using public money should be religiously neutral.

4. The state should not prescribe, proscribe, or amend religious doctrine.

5. The state should not interfere in religious hierarchies, nor interfere in issues strictly related to membership.

6. No action by the state should have the primary effect of engaging in religious practice.

7. No state action should have the primary effect of restricting religious practice.

8. The state should not express any religious beliefs, or in any publication, speech, or other implement of state power such as currency, sworn testimony, oath of fealty to the state, or endorsements of national pride. The state should not imply any derivation of authority from any religious authority, nor should it express temporal supremacy in relation to religious belief or practice.

9. Political leaders should not express religious preferences in the course of their duties.

10. No religion or denomination should have the power to prescribe, proscribe, or amend civil or common law.

Most Catholics would not object to much of that. They don't require members to sign anything apart from a standing order. Since secularism as they are promoting it is itself a religion one wonders if there is not more than a little self-contradiction going on.

I got two signings because it does not distinguish between googlemail and gmail. Lots of people have different email addresses anyway. It let me sign up as Knut Case and Joseph Goebbels. It stopped me from signing as Postman Pat.

Hopefully someone will check the list, preferably after it has been submitted.