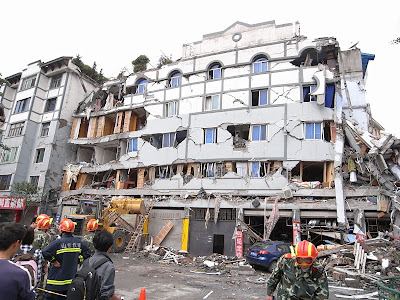 
A Mr Tan Zuoren has just been sentenced by the Chengdu Intermediate People’s Court to five years imprisonment for “inciting subversion of state power” in relation to those events. This, Amnesty International says, relates to critical articles and diaries published online and on overseas websites during the 1989 events. The trial took place on 12 August, with Mr Tan’s lawyers prevented from calling witnesses or showing video evidence. But the sentence has only just popped up. They have long memories, don’t they, the Chinese Gestapo?

That all sounds bad enough. But by all reliable accounts this wasn’t the real reason. It was clearly something they had excavated from their capacious files. What Mr Tan has been doing much more recently is making trouble over the causes of the massive death toll in the 2008 Sichuan earthquake. A total of 80,000 died, many of them children, many of the latter in schools which appear to have been built out of tofu. (Yes, that is the simile the critical Chinese use.)

I thought I would put this up just to balance the previous post. Whenever I put something critical about China up, I normally get a wave of previously unknown readers telling me how mistaken I am.
at February 09, 2010

I dont think that you are wrong. But I do think that there is spin on both sides and I dont think that either side tells the whole story; nor do I think that China is the only country that does ghastly things to any of its citizens who are critical. One of the big differences is that other countries are better at hiding the ghastly things and the Chinese dont bother. Personally, I wish that there could be more emphasis on the wonderful Catholic who looked after the dying rather than the concentration on the perceived cynicism of the authorities. Let's remember that it seems that he has been unharmed despite talking openly about Jesus. thee are many places where he could not do that. And is that just because the government are out to hoodwink us?

This is one of the countries which as a member of the UN Security Council is regarded by some as deciding what is "international law".

Victor;
no-one (well, no sane person) is suggesting that other countries don't have problems - the UK and the US to name but two.

However, the issue with China is that it makes no pretence at maintaining Human Rights except when it thinks it can gain something by doing so; and I have a Christian Duty - not just a Right - to protest (as I frequently do) against the flagrant abuse by any country of the fundamental rights of individuals.

And to answer your last question in one word ? Yes.

Independent;
Quite so; and only on the basis of being the world's largest nation, which either already is, or shortly will be, no longer true.

Unfortunately, I suspect that there will be no changes to the Security Council in the foreseeable future !

Victor - I suggest you have a look at the numerous reports by 'Aid to the Church in Need' on the situation of Catholics in China, particularly the underground church. Their reports are compiled by people who actually go there and see what is happening. To pretend that the persecution of faithful Catholics, is less than what is reported, is wishful thinking.

Hestor, I am a Catholic and I have been to China many times. I always read the ACN reports and I do not doubt their truth for one moment but I do believe that there is spin on both sides. The situation in the country is not exactly what some would have you believe.