Support the Pope: Pray and Pay 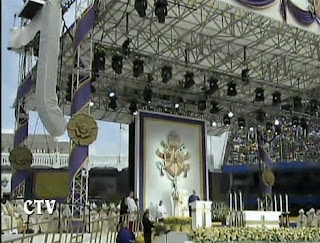 The Catholic Herald runs a report about "officials" being worried about the cost of the Papal visit. I am told the National Secular Society have a petition on-line which says "Make the Pope Pay". As the Herald says this is a State visit, at the invitation of the Prime Minister, hence security and some travel costs will be paid for by taxpayers. The cost to the Church is estimated to be between £3m - £6m.
Pope Benedict's visits seem to be more modest affairs than those of his predecessor, he has a preference for Liturgical events in sacred buildings rather than fields for example, though there is normally one mega-event somewhere. The rumour is ours will be the Mass for the Beatification of Newman, which according to the rumours will take place at Coventry Airport. I must say I hate the thought of it, I suspect the Pope does too, preferring reverence to display but there is a need for some sort of huge public demonstration of faith.
The best way of showing solidarity and support for the Pope, is to pray and pay. I suggested to a member of the Birmingham Oratory, I would be willing to pay for a trumpeter, if they had the Nelson Mass (Haydn, not Mandela).
at February 05, 2010

"As the Herald says this is a State visit, at the invitation of the Prime Minister,.."

The Holy Father is a head of state. In this country the Queen is head of state. Surely any invitation to one head of state should come from the other head of state - and not a prime minister? Or, has Gordon Brown adopted the presidential mantle worn by Tony Blair who exhibited such disdain for the established courtesies and protocol?
However, I hasten to add that I am delighted that the Holy Father is coming to this heathen land - no matter who asked him - so that the faithful will have a glimpse of at least one inspirational spiritual figure in their lifetime.
And yes, I would be prepared to throw in a contribution to a special parish collection to help pay for this visit.

Let me immediately agree with your comment, Father : 'pray, and pay' for the Holy Father's visit is just what is needed - and we should all be proud to do both.

However, I have a suspicion that wherever the 'outdoor' Mass is, it won't be at Coventry Airport - it seems to be a lot busier now than it was in 1982 !

Discreet Observer;
I suspect that this is just Mr Brown putting things simply. The invitation will have come from The Queen - but, of course, on the 'advice of Her Ministers' - and if Mr Brown fails to make the distinction clear, he is not the first PM to do so, I'm afraid.

Since we all have access to television, etc., why not have the beatification in the Birmingham Oratory, and accept that most people will see in on television. We want to hear the Pope's words, clearly, and see him easily, whether in Westminster Cathedral or Westminster Hall. By means of the media, we will all be able to take part more fruitfully than if we were at a mega-showpiece Mass. I also hope that the Pope will be allowed to use the new English translations for those parts of Mass not in Latin, and that he will not be forced to squeeze behind the high altar at Westminster Cathedral but allowed to celebrate graciously "ad orientem".

The Telegraph in December reported Jim Murphy MP, heading the government team in charge of the Pope's visit, as saying that officially it is a 'papal visit with the status of a state visit'.
Pope Benedict has declined the banquets, gold carriages and Buck House accommodation offered for state visits.

I suspect Newmanwould have hated it too.

But it will be a very interesting visit; I shall pray for its success.

I'll certainly be praying for the Holy Father's safe passage and visit, and it will be an honour to contribute towards the cost!

The Vatican pays for Gordon Brown security when he visits Rome. So why shouldn't the same courtesy be afforded to the Holy Father?

Those papal mega-masses are very important to show the world that the Church and the Faith is alive. For example, the Papal Masses in Brazil (2007) had a huge impact in the entire Country.

Perhaps a charity could be set up to allow people to put funds in to help pay for the visit. Even collections after Mass.
I am sure the amount collected would be amazing, it would show everyone just how eager we are to welcome the Pope to England.

I'm with Fr William Young on this: it's always struck me as so appropriate for the Beatification to be at the Oratory, even though numbers would be restricted. I feel that the Beatification itself, and its setting, are more important than the numbers able to be physically present.

However, I suspect neither the Oratory Fathers nor us will have the final say: the organisers will make it as mega as they can be, regaless of how undignified the venue might be.