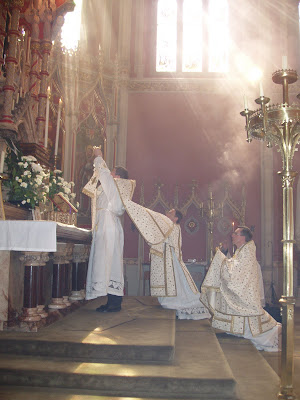 Slowly, slowly I hear of more and more priests learning the "other part" of the Roman Rite, the Extraordinary Form. It strikes me as being quite odd that almost three years on from the Motu Proprio some clergy are actually unfamiliar with this particular liturgical option, not only that but some churches still don't have unequipped for its celebration. Some Prelates, in three years, haven't even attended Mass in this form.
Alright, a bit tongue in cheek but not entirely.

The Latin Mass Society has announced that, although a good number of bookings have been received for the Priests’ Training Conference to be held at Ushaw College in Co Durham during Low Week, about 12 places are still available; and it is expected that these will be taken in the next few weeks.

The conference will provide tuition for priests wishing to learn to celebrate Mass in the usus antiquior, or traditional form, with classes for beginners and more advanced students, as well as those wishing to learn to sing at a Missa Cantata or to celebrate a Solumn Mass. The conference will also include a range of liturgies which will be examples of best practice in the traditional rites. There will also be a spiritual lecture.

Ushaw College is an ideal location for this conference because of the range of facilities it offers, including numerous chapels and side altars for practice Masses. A schola and polyphonic choir will be in attendance to provide the music at all services which will take place in the magnificent St Cuthbert’s Chapel.

As an innovation this year, a simultaneous course will be run for servers wishing to learn how to be an MC at a Missa Cantata or Solumn Mass. Applications are invited from men or boys who already have a basic knowledge of how to serve at Low Mass.

The conference fee is £115 inclusive of full board and lodging. Further information and application forms can be obtained from:
The Latin Mass Society
11 -13 Macklin Street
London WC2B 5NH
020 7404 7284
thelatinmasssociety@snmail.co.uk

A youngish (32) priest of my acquaintance (very orthodox) recently told me he had never even attended an EF Mass let alone celebrated one.

I attended last year's Ushaw conference (as part of the choir); it was splendid with a marvellous atmosphere, a liturgical feast, but much else besides: much comradeship and priests very keen to heed the Holy Father's wish to retain and restore the EF in all its richness.

In this Year of the Priest, it could hardly be more fitting than to explore the beauty and dignity of the old liturgy for the good of the Church, vocations and a fresh appreciation of the holiness and dignity of the priestly life.