Recognise Dissent for What It Is 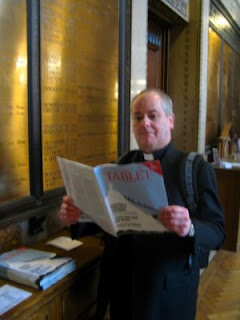 Some time ago someone from the Congregation for the Doctrine of the Faith told me that an English Archbishop had told the then Prefect that The Tablet was neither supported by or promoted by any bishop in the heirarchy of England and Wales. Now that same Prefect is Pope.
I am sure that The Tablet did not figure high in the discussions during the Ad Limina visit but I would love to know if it was mentioned.
I am not sure what that Archbishop meant by "support or promotion", presumably it didn't include selling it at the back of his Cathedral, or bishops, including the Nuncio, giving it exclusive interviews. If the bishops are going to give a sign that they take the Pope seriously then we should expect a certain pruning in the newspapers and periodicals at the back of our churches, we should also expect complaints about dissent to be taken seriously and investigated.


If the full saving message of Christ is to be presented effectively and convincingly to the world, the Catholic community in your country needs to speak with a united voice. This requires not only you, the Bishops, but also priests, teachers, catechists, writers – in short all who are engaged in the task of communicating the Gospel – to be attentive to the promptings of the Spirit, who guides the whole Church into the truth, gathers her into unity and inspires her with missionary zeal.

If The Tablet or any other newspaper or magazine doesn't do this, then it should not be made available for sale at the back of our churches, nor be given priveleged interviews and information and certainly not be the medium through which bishops or even the Nuncio expresses his views.


In a social milieu that encourages the expression of a variety of opinions on every question that arises, it is important to recognize dissent for what it is, and not to mistake it for a mature contribution to a balanced and wide-ranging debate. It is the truth revealed through Scripture and Tradition and articulated by the Church’s Magisterium that sets us free.

When I was a deacon and attending a weekday Mass by a very erudite, wise and loyal priest. He stopped me after Mass and asked what periodicals I read. Embarrassingly, I said 'only the Universe Father'. His response was 'Oh you must buy the tablet. Its important to know what the opposition are saying". I think that can be the only valid reason for buying this damaging publication.

What is the difference between Joseph Stalin and Joseph Ratzinger?

I suppose at one time Stalin at least tried to follow the Gospel of Jesus Christ.

English Pastor: Yes, 'know thine enemy', if the dissenting 'Pill' was required to remove the word 'Catholic' from it's description there would be much less of a problem.

Damian Thompson is reporting on his blog a slapdown of the Tablet by +Vincent. Sounds promising for the future.

Is it not high time we had a Nuncio who grasps the Anglo-Saxon mindset and can be a critical friend. It strikes me the present one and his predecessors have "gone native".

Appalled,
I notice you don't even leave a name.

Stalin was a mass murderer - it seems as if you are willing to belittle the memory of his 20m. victims.
The Pope is one who, with the bishops, safeguards and passes on the teaching of the faith, in its totality.

Obviously you are not a Catholic and want the BNP to speak for the Labour Party.

While studying at Maryvale 1993 I thought the tablet would help me with my MA. I thought it would enrich my knowledge of my Catholic Faith. Well it only took one issue to show me the garbage that was being written. Certainly nothing fit to be kept in a Catholic home never mind a Catholic Church.
Now that was 17 years ago, it's time the Bishops banned it from the Churches, The Sun isn't sold at the back of the Church, so why the tablet.

The Pope is obviously doing something right as so many cages are being rattled.
When our dear Lord Jesus caused such a stir they crucufied Him.

Holy Michael the Archangel defend us in this day of battle.

I know The Tablet is particularly bad, but I also think that if you're going to remove it from the parish paper racks, then the Catholic Times and the Universe should go as well. Both of them are rubbish, they advertise false apparitions and some of the articles do contain dissent.

It is interesting to see English Pastors suggestion that clergy often take the Tablet "to know what the opposition are saying". I would uirge them not to do that and not to stock it at the back of churches.

I happened to be in Westminster Cathedral on one occasion when that week's delivery of newspapers had apparently just been put out for sale. I did not do a count, but was surprised at the size of the piles of copies of The Tablet -far more than of the other papers. I would guess that there were more than 500, possibly as many as 1000.

I wonder whether Archbishop Nichols would have in mind reducing toe number of copies of The Tablet on display at the back of the cathedral in favour of other Catholic papers?

If the cathedral took a lead, and a few priests followed, there could be a major dent in the Tablet's circulation, which in turn could stress its finances.

The accounts of the Tablet Trust can be examined on the Charity Commission website. The Tablet Trust, which has assets of over £1,000,000, owns the Tablet Publishing company, which it subsidises to some degree. It seems that taken together the two publications make a loss.

The loss of say 2000 copies might just be too much for the Tablet to survive.

I would think that it is not beyond the abilities of our bishops to come up with clear statement of what constitutes acceptable material for sale at the back of a Catholic Church.

If newspaper editors valued these sales they would comply. If they were unable to do so then directors might want to make staff changes.

The basic question must be: does this support the mission of the Church or does it damage it?

If the bishops wish to be seen doing more than paying lip service to the Pope, they must make some public sign.
Doing something about our Catholic periodicals which do so very little to inform and educate the faithful would be a start.

Without banging on about it too much, as the Nuncio regards it as fine to give the Tablet an interview, it would seem the bishops and clergy need some instruction on what is to be considered Catholic.

Priests need to have the courage to stop selling it. I know only one priest locally who does so.

Patricia - agreed. The amount of advertising that is done for Mega-forgery is phenomenal. And any newspaper that allows Msgr. Basil Loftus to contribute should be considered suspect.

Fr Ray - thank you for this very timely post. The last week has revealed an astonishing degree of hatred in this country towards the Church, based on the most appalling ignorance of her teaching. The Body of Christ is under severe attack, and we need to defend it. The last thing we need is a fifth column in our midst - yet that is just what the Tablet is. It is not a matter of the occasional challenging article - which might be helpful in keeping us on our toes - it is week in, week out, sheer disloyalty to the Magisterium, and as such to Our Lord himself.

What to do? Should we all write to our Bishops, or would that be futile? Perhaps a few prayers to St Michael would not come amiss.

I'm with the wise priest who wanted to know what the opposition was saying.
I'd rather good, solid argument spiced with ridicule saw off The Tablet rather than the heavy hand of censorship.
Incidentally, the pile at Westminster Cathedral is usually as high at the end of its sell-by date as it is at the beginning.
No need to censor what hardly anyone is reading because it's soooooo boring.

We get the Catholic Herald which is only marginally better than the Universe or C Times.
Frankly the only Orthodox stuff comes out of America; Envoy, Our Sunday Visitor that sort of thing.
I remember Scott Hahn saying how he had gone to Ireland and the people complained they had nothing to read and why couldn't they have periodicals like the USA?
Why indeed?

I thought the Pope's comment about maturity and dissent was apt. It is a sign of maturity to be able to accept legitimate authority.

Given some of the recent content of L'Osservatore Romano, is it still in Italian churches?

For the UK, when I was there I would say the Tablet was the worst. I lived a half-block from the cathedral, and on one Sunday, there was a baptism at 1pm. After it ended, as people were leaving, a woman (30s) said in tones peculiarly akin to lover's coo: "Oh look, there's the Tablet"..

At the same time, I don't think the others are all that great. They largely exist (gasp) for the purpose of moneymaking/employment rather than for spreading the Gospel. One particular event I recall was when there was a rumbling in some Vatican corridor about a possible maybe for "civilly remarried" couples to be allowed "Eucharistic privileges". I think the Pope gave a comment that was not entirely in the negative, something like, "more needs to be done for people in such a state." And every single one of these periodicals, I think, had a big headline about it, almost none were against such musings. Since almost everyone knows someone who lives in such a state, the idea must have been that this was "popular"