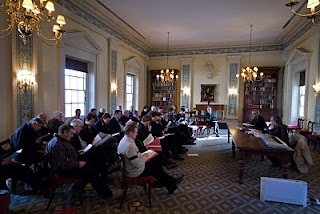 Gregorian Chant Network: This seem like it is going to become a very useful resource masterminded by Dr Joseph Shaw supremo of the Latin Mass Society. Last Saturday they had a chant day at the Oratory, our Directrix of Music went along, I think there was only other woman, but...

I think many of us were wondering where the Latin Mass Society might fit into the post Summorum Pontificum Church, were both Uses are supposed to be made readily available in parishes. This seems like an interesting beginning.
Although there was a bit of criticism of the old regime over it, the most useful thing the LMS did for me was giving me a Missal that could be used on the altar and a set of altar cards, which once the Latin was corrected have been invaluable.
I notice also they are looking for a full-time General Manager.
at February 05, 2010

".....which once the Latin had been corrected have been invaluable." Ouch!

I am glad the new chairman of the LMS is putting a much needed effort into promoting Gregorian chant. I fear this was unfortunately ignored in the years gone by the LMS (partly due to the "low mass" mentality of some of the committee members but also due to restrictive pre-motu proprio period). In a time, when young people are subjected to sorts of trendy, feel-good stuff (even within orthodox movements), this is certainly a welcomed effort.

There was only one other woman there. I am she.