The answer is Jesus but what is the question? 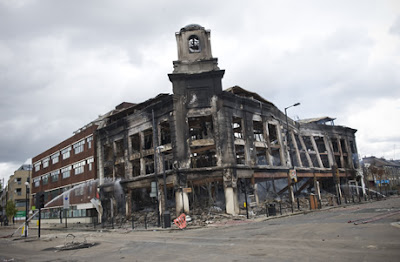 Riots? They happen.
They happen, especially in August, or at least the summer when there are a large number of bored students and school children are on holiday, and when a large number of the police are on the Costas or wherever, along with Prime Ministers, Ministers and Mayors, and everyone else.
It happens in Los Angeles, Paris or Oldham, the amazing thing is it doesn't happen more often. Society is fragile, it only takes one mad Norwegian to kill a hundred innocent people.
Perhaps when the Police are threatened with financial cuts and morale is low there is a hesitation in taking immediate action.


The Pundits are out in vast numbers, and what they say is interesting, for the most part, it is, "Something must be done!" There seems to be a consensus that people are "alienated", that society is "fragmented". I suspect the same thing was said during the Gordon Riots (which actually happened in June but still summertime). There is a sense of dissatisfaction with with where society has gone - they seem to be saying we need Christian values and proper families.

I don't think we have an answer, except the normal Catholic one which is always: Jesus! The problem is what is the question?
at August 09, 2011

This is what happens when family breakdown is so far advanced that 3.8 million children don't live with their natural fathers.

So it is that many of them become so feral that only prison can contain them. Many others are so out of hand that the civil authorities may not be able to restore order unless they apply Roman or Chinese methods and shoot rioters on the streets.

Jesus had to deal with Romans as a matter of course, and He is not recorded as ever having objected to the use of Roman justice against evildoers.

My suggestion for the question:

"Where does my hope lie even when I can't afford a 42inch HD-ready plasma screen TV?"

Some excellent points, Father. The Peasant's revolt of 1381 was a June event (between sowing and harvest), the French Revolurion got going in July, etc.
Too often people find escuses to riot or for those who riot and suchlike by looking to the contemporary economic/political/social situation, rather than looking to the fallen nature of Man. The cause is usually, I very strongly suspect, our human frailty rather than that of "the system"- whatever it was or is.

Eh? I don't know who you're getting your info from but most of the comments I've heard seem to support phone tapping shoot to kill and police state solutions of a rather big brother nature. True you can't have an open society without Christianity so if you want an open society you need to encourage Christianity. Who exactly has been proposing this? Go on Fr. Ray pop down the high street there in Brighton and preach Christian moral values. I'm sure you'll find no shortage of police to deal with you.

Yes, of course the answer is Jesus Christ.
So what is the question.
I would venture "How can man be truly free ?"

It will be found eventually that the majority of those arrested or tracked down later on will not have been in trouble before,they have just followed the crowd and got involved with all the excitement. Now their lives will be truly ruined,unemployed for life and unemployable.In some cases not even allowed to travel.

A Government who might possibly see that they are responsible for most of this could start the healing process by not landing these miscreants with a Criminal Record but put them in an educational programme.

The Red-Necked indignant will be calling for Hanging & Flogging

I think the question is something along the lines of, What foes my life lack?" After all people loot what they think they need/want, riot over things they think they've been denied or have had taken from them. A big experience of God would do them the world of good.

The question is: "How much would it cost to employ the prime minister of Singapore as the new Chief Constable of the Metropolitan Police?"
Am I being tongue in cheek? Perhaps. Perhaps not.

"Where do I find some cords to drive the money lenders from the temple"...???

"Why are the Bishops so quiet on monetary reform....and casting the money lenders from the Temple"...???

for some answers see the Secret of Oz on you tube or look up BillStill.com

Thanks for posting my cheeky answer Father...here are handy links to Bill Still.....Bill is as far as I can make out an American protestant type.....but he has got something with the monetary reform, he is very close to the thinking of the Remnant traditional Catholic type....why don't we ask Bill to leap aboard the Barque...??? in these choppy seas...???
The first link is only 8 minutes long.....the second one is more detailed at one and a half hours....but well worth a look.

We have become as Peter when he ventured out of the boat, and took account of the wind, and sank.

We need to look at the Faith of Noe, and how God used him:

“The holy fathers have considered the ark of Noah as a figure of the Church of Christ, and in that view have learnedly commented, not only on the stateliness of its bulk, but also upon the assemblage of living creatures that were contained within it.

The Church, like the Ark, has triumphantly risen above the storms that have been raised to depress her; by the activity and vigor of her founders, she has carried salvation even to the extremities of the earth, whilst, by the vocation of the Gentiles, she assembles within her pale a collective body of believers from every tribe and nation beneath the sun. This is the refuge which all must flock to, who desire to be saved; this is the sanctuary, out of which no salvation can be found.

For whoever does not believe, says our blessed Lord, will eternally perish.

Singular, then, has been the mercy of our Redeemer, who, in preference to thousands, has not only taken us into the bosom of his Church, but has moreover given us the grace to know our happiness therein.

Without such a grace, we had, like the rest, been borne down the torrent, which has deluged the world with vice and infidelity.

By a merciful stroke of his special providence we have been cleansed from sin in the waters of baptism; by his cross we have been rescued from perdition; and through his merits we hope to enter the haven of eternal repose”.

Thus wrote an unknown French Priest on the Eve of the French Revolution and in the midst of the most ferocious attack on both the Faith and human reason that the world has ever seen – that of the French philosophers or Encyclopedists: Voltaire, D’Alembert, Diderot, and Rousseau.

It is the handbook for Pastoral Care.

Of course the Gordon Rioters thought that they were rioting for Christian values! (just misguided protestant ones)

Actually there are quite a few superficial similarities between the Gordon Riots and this week:

- were the authorities too weak in their initial response (not using water cannon or the Riot Act);

- leading politicians trying to make a name for themselves (on both sides; Gordon leading the protestors, Wilkes leading the troops - compare to Livingstone vs Cameron);

- other politicians using it to argue for whatever they wanted to do anyway;

- even arguments that the rioters were really driven by unemployment and rising prices.

Is it rioters that don't change, or politicians and media commentators?

The question is: How am I to be fulfilled?
Formerly, it was put less egotistically: "What must I do to be saved?"
Jesus is the only answer that is thoroughly defensible philosophically.
Unfortunately, most people involved in these disturbances were far from thinking, let alone wisdom, at the time. Our ancestral wisdom told them that the devil finds work for idle hands to do.

The stupidity of governments who took over all control of education and training, and then decided that outstanding intellectual excellence was elitist and should be eliminated or discouraged in schools, while at the same time destroying the whole system of apprentice training and social status in craftsmanship, has left us with what?
Overblown financial and service sector, low-paid unskilled work for many, and a large number of bored unemployed with no hope of a good and purposeful life.
Where was the voice of wisdom to be heard from the hierarchy while this was happening? Catholic educational institutes within the state sector passively conformed, as they continue to do today, ensuring the rot pervades the whole of the next generation. That is why even Catholics do not know the question to which Jesus is believed to be the answer. They know very little, and their intellectual equipment is left undeveloped, but rather distorted and rendered useless by the denial of objective value in anything outside of the self. And so the young all know that Jesus is a myth and it is stupid to believe in God.

The problem is what is the question?

Question = How do I enter the kingdom of heaven.

You should know this by now. And you say it above.

The Robin Smith Institute: What is True Root Cause? There is a Silver Bullet.

Sorry to go on. I study Roman history, its social organisation and what, at the root, caused it to fall at the root.

Yes I do recognise ultimately this was due to ignoring the Great Commandment at the deepest spiritual level.

But here is an idea that might trigger thought in the economic sense just above that: