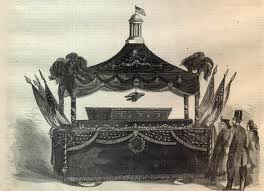 Evening Mass is finished and it was the last Sunday Mass with old translations, somehow I think we should have had a wake, some act to mark its passing, like the medieval burial of the Alleluia. It isn't saying farewell to friend, I'm glad we have fished with it.
We have been using the new translations at weekday Masses for little while now, just so Sunday next I am used to them and we have a few people trained to make the new responses, so during the week I am just going to put the loose page of the old Missal Propers out and the little paperback interim Missal.
Maybe I might put the old Missal out somewhere under a black pall.

It marks the end of an era, I suspect someone will offer the "old Mass" at 3.25pm on the third Sunday at some forsaken felt bannered country church for a few elderly sandalled hobnob eating tamborinistas.

Just a note on translation, we had in England for the first reading, "You have seduced me, and I let myself be seduced". Americans had, "You have duped me...". I'd prefer being "seduced" than "duped". Yuk!
at August 28, 2011

I was puzzled by the Gospel reading today where Our Lord talks about ruining one's life. This is the version I grew up with:
"For what doth it profit a man, if he gain the whole world and suffer the loss of his own soul? Or what exchange shall a man give for his soul?"
Matt 16: 21-28 Douay-Rheims.
The two versions appear to me to mean two totally different things; the latter being a far more serious proposition.

We are now too old to worry about it but we will get the hang of it while wait for our Requiem Masses.

Funny to think that all the novus ordo missals are useless now, but the ancient extraordinary form missals, which were probably mostly all dumped or hidden away in attics in 1970, are just as usable as when they were manufactured.

Seems as if the Canadian Bishops were way ahead of the game here. I guess that's the nearest thing to a Requiem for an inanimate object...

We, here in Australia, also had "You have seduced me"

Mac,
That is horrid.

I was somewhat dumbfounded when I heard "duped" this morning. "Seduced" is much better. I do wonder where seduced comes from though. Every translation I've looked at, including the Douay Bible, says deceived. I do like how Knox put it though: "Lord, thou hast sent me on a fool's errand; if I played the fool's part, a strength greater than mine overmastered me." I also find deception rather difficult to reconcile with Jer 20:9, while seduction and being sent on a fool's errand are not.

In the USA we have to wait until November. Enjoy!

I was puzzled by that reading but it's the same in the RSV. The Knox translation has 'soul' as does the Westminster translation from the Greek and the King James translation.

Great Father. In Ireland, we do not begin to use the new translation until the 11th, but we have no interim Missals, neither the bishops nor their publishing house have seen fit to provide one. So the old translation with the exception of the people's responses, will be in use here for some time to come. And of course there are the members of the ACP who are going to refuse to use it, so in pockets of Ireland, and particularly in the cathedral of the diocese of Killala where their leader is Adm, the old Missal will remain until Rome takes these dissident priests on - no Irish bishop will take them on. Indeed some have speculated that the new translation will spark the schism here and usher in the new Irish Catholic Church, much desired by many priests, laity and members of the government. Pray for us!

I thought exactly the same thing at Mass when I heard the reading - the loss of a soul is for eternity, and much more important than a ruined life which is mortal. I guess that reading blogs like Fr Blake's we are all having our consciousnesses raised.....(a phrase that a tamboranista might recognise, even if they disagree with it).

We were "duped" yesterday morning. I cringed when I heard it..........what were these people thinking?

James, I know that the members of the ACP don't like the new translation and some suggested on their website that they refuse to use it. But I haven't seen any evidence of their making such a decision.

There is a solution.

In reponse to the responses, at least we can say we were paying attention.
Sometimes when I hear something which doesn't chime, I think it's just me.

It’s not just the old lame duck translation – when the leader of the “music group” at Mass yesterday morning announced that it would be the last time we would use the “Clapping Gloria” I couldn’t help saying “hooray!” (and getting a nasty dig in the ribs from Mrs Rusticus…)

I certainly pray that someone will post a a video or a sound bite of the first celebration of the new translation, since folks across the pond have to wait until Advent.