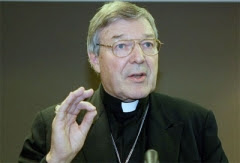 There is an interesting talk giving by Cardinal Pell in Cork, there is a link to the whole thing on Shane's blog. Cardinal Pell sets out not to lecture the Irish Church but he draws from his own experience of things that worked for him as a Bishop.

Here is one excerpt on vocations but the whole thing is worth reading.

The other thing that is essential for the future is to make it absolutely clear that you need priests. There can be no Church without priests and this means you must have a seminary where young people will be prepared to go, and this means you must have an orthodox seminary. It means that you must have a seminary that is not sexually corrupt. Of course, we have experienced sexual corruption in the Australian seminaries. I can tell you of one poor lad who knew me from a previous place. He was a teacher who went on to become a priest. When it was announced that I had been appointed Rector of the Seminary I am told he ran weeping from the presbytery. He was a priest for only a few years when he left to live with his male partner after telling his poor mother that his partner was a Catholic. So I am talking from that sort of experience; the young people today are products of the culture in which we live and so we have to be vigilant. In the seminary they have to be taught to pray; prayer life and spirituality have to be the priority. I should add that when I am entering a diocese I have never thrown all the staff in the diocesan offices but when I became archbishop in Melbourne I instructed that in the Seminary there had to be Mass everyday; they were to have Benediction, Adoration and be able to pray the Rosary together — most people expect this to be a normal part of seminary life. However when I put this to the Seminary staff they said they wouldn’t accept it and en bloc offered to resign — so I accepted their resignations and it was one of the best things that had ever happened in the diocese. In other words when you start making changes you can expect resistance. I recall that when I announced the changes in the Seminary to a meeting of the Melbourne Council of Priests not one of them spoke in support of my plans. I knew there were people who did support it but there was not one who would speak out and support it at the time. I am sure that the reform of the Seminary was the most important thing I did when I was in Melbourne, even more so than the religious education. Melbourne is now regularly turning out good orthodox priests and of course when you get good young men going through then they attract others.

It's a pity that Cardinal Pell was not available to give a talk at Ushaw College four or five years ago because it might have been saved.

On his opening remarks about priests, I remember a young priest about 20 years ago asking the congregation at the beginning of his sermon to think of one word to describe a priest. After waiting a few seconds to allow for some thought he said that the single word that described a priest was 'necessary'. If there is no priest, he said, there is no Mass. And if there is no Mass....... He had no need to finish the sentence because the implications were clear. However, that was 20 years ago. Nowadays, however, with the proliferation of 'Services of the Word and Holy Communion, and various 'lay-led' services there is a growing assumption among far too many that we can cope quite comfortably without priests. Such is the depth we have sunk to.

"...the young people today are products of the culture in which we live and so we have to be vigilant. In the seminary they have to be taught to pray; prayer life and spirituality have to be the priority."

And taught to preach!

"Strong Leadership" refers to the question of the role of the priest.

I pray that this Sunday, from the pulpit, we will hear that the so-called rioting is copy-cat criminality the visual impact of which is much valued by the media for its drama.
This is no Peasants Revolt against injustice.

A marvellous witness to the Truth.

Pell did the right thing. I studied in the seminary there in Melbourne and there were many who should never have been ordained. Horrendous how some got through. And I know some of those who resigned after Pell's instruction. What is interesting, is the fact that they would not accept the directive of the diocesan Bishop and walked out. Unbelievable. I would have expected them to resign their work as priests as well. Some of those were seen as future bishops. No more. Unorthodox and out. Bravo for Pell. But moved on after 4 years to Sydney

May Our Lady of Fatima soon fulfill Her Promise:

“In the End, My Immaculate Heart will Triumph and a period of Peace will be given to the world.”

In that time, too, the Church will be restored to Her former glory in the Garment of Truth and Holiness which she wears today, under the tatters of heresy and scandal.

I think he's absolutely right. I have experience of a seminary/college that needed just that approach. A seminary is, as its name implies, a seedbed. If you plant theological weeds, you get the truth at least partially choked by confusion.

I fervently hope that bishops and archbishops will be able to hear and act on Cardinal Pell's word.

Hooray! I wish we had many more like Cardinal Pell!

Cardinal Pell did move to Sydney but Archbishop Hart is a worthy successor. The seminary at present has fifty-two seminaries though three are destinied for the Military Ordinariate and two to the Archdiocese of Hanoi. The rest are bound for Victoria and Tasmania.
I know several of the seminarians and all of them are orthodox and will, God willing, make fine priests.
There are some fine bishops in Australia, Bishop Prowse and Bishop Long come to mind. The latter was recently installed at Saint Patrick's with over 4,000 in the congregation. The figure comes from the secular media.

My apologies I meant to write fifty two seminarians.
Bishop Long incidentally arrived in Australia as a refugee in 1980. He is the first Vietnamese Conventual Franciscan to become a bishop.