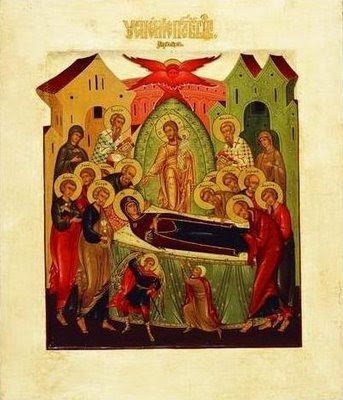 Fr Tim has an interesting post on death and funerals, he objects strongly to the “Death is nothing at all” nonsense. Interestingly he adds:

So many people today have an extra "guilt trip" shoved on their shoulders because they are told to think that it is somehow not right to mourn. The popular transformation of the funeral into "A celebration of the life of ..." distracts people from the opportunity to do the one thing that really helps those who have died: to pray for them.

I think I have said much the same about Scott-Holland's poem and its absurd understanding of death myself.

The Assumption does of course tell us that “Death is nothing at all... I have only slipped next door”. But the Assumption is about the uniqueness of the Blessed Virgin and about Grace and about her constant choice to accept and co-operate with Grace and her total, chosen, submission to God’s will.

The Assumption also reminds us that “All”, except her, “have fallen short of the Grace of God”, she is the only exception but only by the Grace of her Immaculate Conception which causes her to be addressed by Gabriel as “full of Grace”, or as the lame duck Lectionary has it, “highly favoured”.

It is Grace alone that enables her to reach the highest heavens. Even the greatest saint won’t until attain that until after the Last Judgement, “when all is made new”. Even the Blessed, those who are judged “holy” and stand in the presence of God do not see him, yet, in their “flesh”, it is one of the important things relics tell us. For though we honour their bodies, the Saints are not in Heaven with their bodies, the Holy Virgin is the lone exception, they have to wait for the whole Church to be Glorified but until that time we are with them plodding on our pilgrim way.

When we die we will be judged, the Particular Judgement. Then God will decide whether Heaven or Hell is ours, and if it is Heaven, then God judges whether we are ready for it, or whether we need to be purified, and make restitution, in Purgatory. If we die in a state of serious sin, or outside of Christ, then Hell is certainly ours. Faith gives us hope but there is a vast difference between Faith and presumption.

It is fundamental Christian doctrine that Christ came to save us from separation from God, he alone is our Hope. Hell is not a medieval torture chamber but something far worst: the absence of God. Some early Christian described themselves as “the Alive” and those outside of Christ as the “the Dead”. It is that vital difference.

Fr Tim is speaking about is our confusion in the Church today at funerals, over eschatology, the “Last Things”. The dreadful thing is, I suspect, such confusion merely masks a further confusion(s) which is: what our Life is about and most importantly: what is Christ about. Does he have a purpose? Was the Atonement necessary or can we merely live without him?

Has Christ now become merely about quality of Life, offering vaguery that in some sense Life is nicer with Jesus. If that is so why bother? If we needn't bother then are we Christians or atheists?
at August 16, 2011

'It is Grace alone that enables her to reach the highest heavens. Even the greatest saint won’t until attain that until after the Last Judgement, “when all is made new”.'

What about the Penitent Thief to whon Jesus said "Today you will be with me in Paradise"?

" the Holy Virgin is the lone exception,"

I've heard this preached several times and it makes me wonder about Elijah. Where is he? I thought he was taken straight to heaven without a body left here on Earth.

There are discussions of the word "paradise" on Google.

For example:
"The comma between the words "thee" and "today" was inserted by the translators. The original Greek text, which had neither punctuation nor word division reads: "amen soi lego semeron met emou ese en to paradeiso," literally, "truly to-you I-say today with-me you-will-be in the paradise." The adverb "semeron," "today," stands between the two verbs "lego," "I-say," and "ese," "you-will-be," and might properly apply to either. Its position immediately following the verb "lego," "I-say," may imply a closer grammatical relationship to it than to the verb "ese," "you will be."

Obviously, in placing the comma before the word "today," the translators were guided by the unscriptural concept that the dead enter into their rewards at death. But it is manifest that neither Jesus nor the writers of the New Testament believed or taught such a doctrine. To place the comma before the word "today" thus makes Christ contradict what He and the various New Testament writers have plainly stated elsewhere."
I am not sure what the official teaching is on this but it is all speculation.

This year there are several posts on various blogs about the Assumption of Our Lady, rather more than usual I think.
One comment raised the two Old Testament holy men of Enoch and (as Jonathan notes), Elijah.
For those who are not aware of Enoch (or Henoch), he is mentioned in Genesis chapter 5 verse 24 in particular which reads "And he walked with God, and was seen no more: because God took him". Some commented that they had problems with this because because if Jesus, Our Lady, Enoch and Elijah are bodily present in heaven then heaven must be a physical place for these bodies to be in it, and so, where is this place? Or, are they not the same bodies which they had on earth?
All I can say about that is that Jesus did not need to have the door opened for him when he came into the upper room after his resurection!
I seemed to have digressed from the topic of your post Father. I do agree with you that funerals should not be celebrations of the life of the deceased but they should be prayers for the repose of the soul of the deceased that they may attain the perfection required, sufficient for entry into heaven.

A movie showed people that had died standing above a trap door and pulling a lever.

Trap door opens, the soul would fall into Hell.

While the majority of Catholics now believe that is how it works, it is not true.

Another misconception of modernists Catholics is to presume on God’s mercy by ‘consoling’ people at funeral Masses that “He (or she) is in Heaven.”

That has been the name of this grace for the last one hundred to one hundred and fifty years.

Before that, this grace was known as Habitual Grace.

To keep oneself in a state of Habitual Grace is to keep prepared for particular judgment.

To keep oneself in a state of mortal sin prepares the soul for damnation.

At one point we will experience our bodily death.

We also experience death of the soul, when we are in mortal sin; we are walking dead.

The only difference between us in mortal sin and the damned in Hell is we still have a chance to repent and come back to life.

This needs to be considered when we meditate upon Death.

'...What about the Penitent Thief to whom Jesus said "Today you will be with me in Paradise"?...

To be with Christ is Paradise.

Here is what Aquinas writes about Enoch and Elijah (Elias) in his Summa Theologica III, q. 49, art. 5 when discussing the question of whether Christ opened the gate of Heaven to us by His passion.

Aquinas anticipates the objection that some of the prophets, such as Elijah (Elias), had already been taken up into Heaven, long before Christ's suffering and death on the cross, and replies that they did not go to the same heaven as the one opened by the saving death of Christ:

Elias was taken up into the atmospheric heaven, but not in to the empyrean heaven, which is the abode of the saints: and likewise Enoch was translated into the earthly paradise, where he is believed to live with Elias until the coming of Antichrist.

St. Thomas teaches that these two prophets are not in the empyrean heaven (i.e. the supernatural realm) but are in the atmospheric heaven.

According to Aquinas, these two men are now waiting for their encounter with the Antichrist, in the earthly Paradise that God originally created for Adam.

Aquinas held that Paradise still existed, in some secret, inaccessible place on Earth.

For Aquinas, the historicity of Enoch and Elijah was beyond question.

The accounts in Scripture were "set down as matter of history; and wherever Scripture makes use of this method, we must hold to the historical truth of the narrative" (Summa Theologica I, q. 102, art. 1).

Enoch and Elijah were assumed bodily but presumably not into heaven since this could only happen after the death and ressurection of Christ. My understanding is that the Old Testament believers were taken to the bosom of Abraham where they waited until Christ had opened heaven.

The footnote to Luke 23:43 in the Douai-Rheims Catholic Bible read: "[43] "In paradise"... That is, in the happy state of rest, joy, and peace everlasting. Christ was pleased, by a special privilege, to reward the faith and confession of the penitent thief, with a full discharge of all his sins, both as to the guilt and punishment; and to introduce him immediately after death into the happy society of the saints, whose limbo, that is, the place of their confinement, was now made a paradise by our Lord's going thither."
Sounds like 'today' to me!

My Parish Priest, young priest and an expert on canon law, told me recently that God is everywhere so He must be in Hell but to the wicked to be permanently in His presence is...Hell.

Hi Doodle,
I think the point that Fr Ray is making is that the other saints, including the penitent thief, experience the beatific vision now but have not experienced the bodily resurrection. Mary is in heaven with her body and soul and is alone among the saints in this distinction.

I did a similar post on PopSophia called "Where Do We Go When We Die?" related to Fr. Tim's.