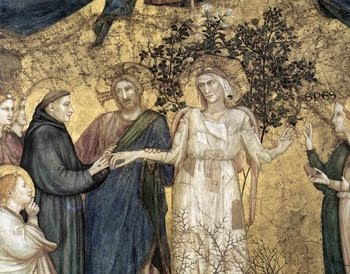 I like those pairings of saints Francis and Clare, Benedict and Scholastica, Theresa and John of the Cross, and so forth. It is part of the like attracting like.

There was a great deal of pressure put on St Clare to adopt the Rule of St Benedictine, she stood firm and wanted the more radical Franciscan rule. Embracing Francis' idea of life totally dominated by Poverty was more risky for enclosed nuns than for male mendicants, they were more likely to starve or become dependant on the place in which they were resident.

Benedictines took vows of obedience, stability and conversion: Franciscans vowed poverty, chastity and obedience. The Franciscan vows were not new but the radical nature was interpretting them in the light of a mystical marriage to Lady Poverty. Hence, poverty was seen as owning nothing and therefore being dependant on Divine Providence. If alms were given, they ate: if not they went hungry, if there wasn't anything in the garden; whilst Benedictines in contrast tried not to be a burden on the local community and were happy to trade, to farm or manufacture and often acquiring great wealth for the monastery. The radical thing about the Franciscans was Divine Providence.

Poverty also marked chastity in a radical way, for Clare and her nuns they didn't even claim ownership of their own bodies, good or ill health was a gift of God. Embracing of corporal penance, of vigils, of fasting seems much more marked than most other religious of the time, because even their bodies were not their own, not even their pain or suffering, so much so that death, with whatever suffering might come with because ultimately death is Sister Death.

The same with obedience, Benedictines saw the will of the Abbot as the will of God but it seems almost unthinkable for a Benedictine Abbot to command a subject to bury himself in a dung heap until he was "dead" to self, or at least until the time of de Rance and the Trappist. The Benedictine's saw obedience as a virtue in itself, preparing the monk "to prefer nothing to the will of God", the Franciscan's saw it as part of poverty, "not even owning one's own will".

The radical nature of Franciscanism has been of the reasons why there were so many reforms and why there are so many branches of the Fransican Order, and why Saint Francis has appealed so much to the young.

My Father always tells me I own nothing, it's all on loan, even the body I stand up in.

We do own our will, but God desires it, for our own good.

I know this, but learning to live it is another matter. If there has been any change, it is that I do see this surrender as the truth and the way I need to go. Subjecting the body and it's desires is a wrestle, rather than a dance, some days.
Stubborn auld brute that it is, also unsettled, in the morning sometimes. I've started telling it to calm down, it'll be fine after a cup of tea and a Hail Mary.

As someone once said, you can wake up with a 'mugged' set of emotions, even if you went to bed all serene. Take no notice and affirm yourself, outloud if needed.

Say "Good morning God! rather than, Good God, it's morning".

Everything is providential, the notion that it is not is an illusion of being in control.