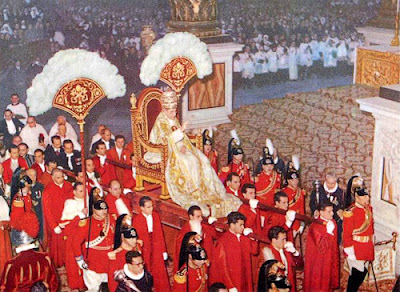 One of the things Benedict XVI's Papacy has given us is the intellectual freedom to question the sacred cow of the interpretation of the Second Vatican Council, not only its interpretation but the teaching of the Council too: what exactly is meant by "religious freed", for example.

We are not called to be faithful to a particular Council, anymore than we are called to be faithful to a particular Pope's teaching, except the reigning one as the centre of Christian unity but we are called to be faithful to the Magisterium of the Church. It is the Church that Christ guarantees to be inerrant, not a particular Council, and not a particular Pope, except in the very particular circumstances of an Infallible statement.
Various conservative groups like the geriatric Stand Up 4 Vatican 2 are as irrelevant and heretical as Stand Up 4 Nicea 2 might be. The Magisterium has moved on! Catholics are not "Concilliarists", we understand Councils speak to a particular time, they are part of the continuous effect of the guidance of the Holy Spirit.
The problem with the Holy Spirit is we need history to help us discern where he has been. For Orthodox Christians it isn't so much that a Council is under the guidance of the Holy Spirit rather than its acceptance by the Church, the sensus fidelium. It is the acceptance of a Council's teaching that distinguishes a "robber" Council from an authentic one. In practice the same thing happens within the Catholic Church. It is first of all the acceptance of a Council's decrees by the Bishop of Rome that guarantees an authentic Council, secondly it is his interpretation in communion with other bishops that guides how a Council's teaching is to be interpretted. Hence Joseph Ratzinger's joke that the Holy Sprit's role is to clear up the mess made by a Council.

With the Second Vatican Council, fifty years on, we can begin to make some assessment of its value but it has to be seen through the perspective of the present, today, most obviously through the light of the Magisterial teaching of the Church - in practice the Popes - through encyclicals like Humanae Vitae, the 1984 Code of Canon Law, the Catechism of the Catholic Church etc. etc.
However it is not simply the teaching but also the practice of the Church that is important, that shapes both teaching and the acceptance of teaching, this is why Benedict XVI sees liturgy as crucial - hence my opinion that Summorum Pontificum and Anglicanorum Coetibus are as significant as those documents that interpretted VII - note "interpretted" is in bold and underlined!

The big problem with VII is that unlike any other Council it issued no Canons, no summary, which has meant for some that everything was regarded as inspired, even over and above scripture or any other Council, it became "THE" Council, something never intended by either Blessed John XXIII or Paul VI or the Concil Fathers themselves and has no place in Catholic theology.

For some Vatican II was Year Zero, an experiment in rupture, a break with the past, for some it was a golden calf that consumed the Church's mission dragging men and women who were already fulfilling the teaching of Lumen Gentium and Gaudium et Spes and sanctifying the world ad extra into fussing about the ad intra. The last 50 years have been the most "churchy" in the history the Church which by its very nature is Missionary. I speak as someone who has never known the pre-Vat II Church, except through the great theologians and saints and works of art. I want to go forward not backward, so I treat Vatican II with respect but for me it is one at the end of a long list and Holy Church has moved on.


A now silenced blog, much praised for its erudition, insight which I enjoyed for that and also for its rather English humour carried an interesting series of posts on Councils:

You make a vitally important point Father. A fresh interpretation of Vat 11 is needed in the light of the Pope’s concept of Continuity.

The Reformers deliberately used ambiguities in some of the documents so that although they proclaimed Truth, as all Council documents must under the inspiration of the Holy Ghost, they were also open to other interpretations.
++Schillibeeckx openly admitted this.

I understand that a re-interpretation of a Council, or Council document can only be done by a new Council – or by the Pope himself.

Let us pray that he will see his way to doing this so that VAT 11 can be properly implemented.

My erstwhile boss in the business world (RIP) always touted his ‘open door’ policy. He was available to anyone and everyone and listened to all points of view. However to anyone who had worked for him for some time (I did - for 25+ years…) it became obvious early on that while Jerry listened to everyone, he was more swayed by the last person who had spoken to him. So you didn’t want to be the first to put forward your proposal for whatever project or plan was in the works. Better to be the last!

I expect that for many Catholics Vat II is THE Council because it is the only one they have experienced in their lifetime - or at least in recent memory. For those of us a little longer in the tooth there was Vat I, which while not in our lifetime either, was at least of fairly recent history. And of course it defined Infallibility. That was hard to top!

But as with history and the danger of lack of attention to it, we did not limit ourselves to the 19th century. There was Trent of course, which for many of us was THE Council. I mean, all those anathemas… Now that was heady stuff. No foostering there. This was black and white - especially black! And then there were Nicaea I and II, Constantinople (a bunch), Ephesus, Lyons, Vienne, Constance, Lateran (another bunch), etc. etc.

I was in Rome during Vat II and attended the public sessions, including the final one. However, we were not overly concerned about the goings on in St. Peter’s back then. While we received ‘early releases’ of the Council documents – run off on a Roneo machine and in Latin, of course – and professors touched on them betimes, it was not an earth-shattering experience for us. With an eye on end-of-term exams, we were more concerned with Denzinger, Ott, Fuchs, Noldin, Aquinas, Augustine, Bellarmine and others than the emerging ‘stars’ of the Council – Rahner, Ratzinger, Kung, Schillebeex, and so on - or the texts, for that matter. Sufficient for the day, and all that.

So for those who are ‘hung up’ on Vat II, it was one among many and, like most of the others, it caused controversy. Was it the most important ever? Hardly. Will it be remembered forever as the most divisive or trend-setting. Again - hardly. But for now it is the one closest to us in experience. But what will it be in 500 years?

The most dangerous moment for any autocratic system is when it begins to reform itself. Vatican II triggered Reformation II (the iron rivets of Trent having long corroded). Reformation II provokes Counter-reformation II, and so and so forth, while the authentic Tradition slips unnoticed over the horizon.

Somebody should have stood up for Nicaea II a great deal earlier. It's far too late now, I fear.

I keep praying that the "silenced blog"may, one day, return to edify those of us that enjoyed it.

A colleague of mine was musing years ago about two missionary priests in the far distant future on some remote planet discussing Church councils. One asks, 'Vatican II? Was that before or after Nicaea?'

The silencing of that blog was a chilling sign of autocracy.