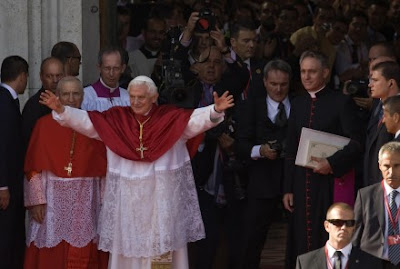 I thought some of things the Holy Father had to say to seminarians were incedibly beautiful. I have had a number of seminarians and people thinking of priesthood coming to see me recently. What Pope Benedict says, I wish I had said to them.
As always he calls for interiority: prayer and study. Again, as he told children here in the England, in Spain he tells seminarians, "Be saints".
He concludes his homily by saying, "Approach the priesthood only if you are firmly convinced that God is calling you to be his ministers, and if you are completely determined to exercise it in obedience to the Church’s precepts". 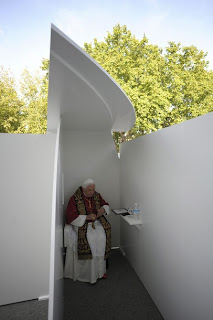 Later today he spent an hour hearing confessions Rocco Palmo captioned this picture as "Pope in a Box". I was amused by that.
at August 20, 2011

What is it about this magnificent Pope that many bishops and priests feel unable to follow him? In a Church where there has been widespread division and too many episodes of quite dreadful behaviour, we should all be rallying under his example and leadership. He is a beacon of light, of truth, and of inherent goodness, that should inspire all our clergy to become like him. What a transformation this would bring to the Church and what great benefits would follow.

I think that "Pope in a box" image is my favourite picture of the Pope... at all.

We see that he isn't afraid to get on with the basics of priestly ministry, and that he doesn't require the luxuries of the Vatican - he's happy to sit in a little, MDF (?) booth and hear confessions.

He doesnt shrug off his office, though - he's still dressed as a Pope, because that's who he is. But this is not a picture of an arrogant monarch. It certainly isn't the image of a "father of princes and kings" or a "ruler of the world". But it most certainly is a picture of the Vicar of Our Saviour, Jesus Christ, to whom be glory and honour.

"With this confidence, learn from him who described himself as meek and humble of heart, leaving behind all earthly desire for his sake so that, rather than pursuing your own good, you build up your brothers and sisters by the way you live".

Following this the pope then goes and hears confessions what a wonderful example of service.

Very moving sermon. I liked especially this part: "Approach the priesthood only if you are firmly convinced that God is calling you to be his ministers, and if you are completely determined to exercise it in obedience to the Church’s precepts."

I love our Pope!