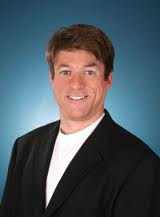 I could go on a bit more, quite a bit more. I could get a bit rude and suggest that he is just too American but then I have a recollection that a few weeks ago the American Bishops had something on a website about Michael Voris not being "officially" part of World Youth Day. Now it was Voris that they chose to distance themselves from but there wasn't a mention of any group that supported homosexual or female ordination, or Catholics for abortion or a hundred and one other dissident groups, who are also not "officially" part of WYD, it was Voris alone who received the accolade.

I don't like Voris, and yet I am always going round saying that the reason we are failing our young people is because we are not clear in our teaching, that we make everything unnecessarily complex.

Then when I think about it I would probably find an objection to Newman for being too subtle, Ignatius of Loyola for being too demanding, Francis of Assisi for being too radical, and so forth...
Except for the absence of the "both, and", Voris is more, "either, or" I actually do not find Voris un-Catholic.

With that rather long and tedious preamble Paul Smeaton asked me to announce: 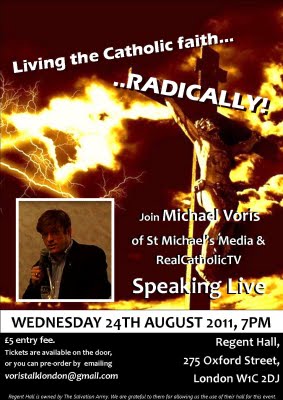 Father, that was a fantastic post and says a lot about the state of American Catholicism--- and really all Catholicism.

Thank you for your honesty, as well as your humility.

A find Voris a tad annoying but deep down I quite like what he, and his group, Real Catholic Television, do. They promote simple orthodoxy and are loyal to the Church, sound stuff to my mind.

"REPLACE". Hand Made Wigs in London.
Natural, non-surgical hair replacement in London from our made to measure wigs will change your look and boost your confidence.
www.replace.co.uk

Don't worry Father, you're just a little conthraaaaaary with everything:). I'm sure Mr. Voris will do fine. He does great work regardless of his style. Yes he is black and white God is too. Are you aware of any failures to quote Church doctrine accurately? (except maybe one area regarding the merits of a monarchy over any other style of government although this was corrected in a subsequent posting). The Bishops did the Church a great service by pointing him out as not a part of WYD. Can you imagine a better means of promotion? Are you sure the Bishops were not unaware of that either?

I don't like laity taking on such roles. Too often being a good Catholic translates into being an active Catholic within the sphere of Church business, be it at the parish level or nationally (such at Voris). I'd like to see more strident Catholicism among butchers, bakers, and candlestick makers, and fewer lay Catholics with cottage industry apologetic organizations.

We should know our Sheppards well enough that if we are to extend the Kingdom of Christ, it should be in support of our Sheppards.

The dog and pony show presented by this type of production does little or nothing to encourage souls to habitual grace.

It works towards continual confusion and animosity.

Julian,
That is unkind, but "lies and falsehoods" start from the head and work do0wn to the heart.

Do so agree, Father, unfortunately.

It's the first photo that puts me on edge. When I see a publicity photo like that I'm afraid I check my wallet and soul are safely secured (that is no reflection on the behaviour or motives of the gentleman in question - just an instinctive reaction from one who's seen a few of these photos in his time).

I think Julian is being kind, Father.

When a tele-evangelist is challenged theologically, it does well to avoid being additionally challenged horizontally or follicularly.

I expect this remark to be censored but I did find your response to Julian so funny!

Very excited about this Father. If anyone from St. Mary's is going - I'll be there with Daniel Joyce and a couple of others. Does Mr Voris travel with that blue board that spells out key words, I wonder?

"Then when I think about it I would probably find an objection to Newman for being too subtle, Ignatius of Loyola for being too demanding, Francis of Assisi for being too radical, and so forth..."

Age is doing that to me aswell Father! I'm never pleased enough! All my opinions are becoming arthritically tetchy!

I quite like Voris - and I'm far from being in the category of "young people" that you refer to, Father.

George has reservations about the laity taking such roles upon themselves, but given the ineptness, the timidity, and lack of leadership our bishops have shown over the past forty years, thank God for the Voris's of this world.

I find myself automatically dubious of someone who carries themselves with that kind of hectoring certitude.

I've seen it too often in two kinds of shyster: the pseudo-academics who sell books "uncovering the real truth about Jesus", and the more dishonest sort of politician.

I also find myself wondering how much credence one should give to someone who speaks from the basis of an STB. First, this is not a great sign of specialism (given the lack of higher qualification), and second, I find myself asking: when, where, and under whom?

In the present age in the Church, when it seems like every preacher, lay or clerical, is preaching heresy according to someone (ah, but in Dictatus Papae it says XYZ...), I find myself especially leery of someone who sets themselves up as the guardian of the True Teaching of the Church.

Everything he has said in the past seems spot on to me. From my own experiences. It would be nice if our Bishops would be so vocal about anti-catholicism, and the return to the traditional Church. I do live in the US. remeber Father, he had to reteach himself the faith, like so many of us here in the US, and elsewhere. Because are "religion" classes in our Catholic Schools taught us the "new Catholic faith", not the Catholic faith of the Saints.

That rules out most Catholic priests.

Thank you for that.
Yes it is important!

"... An official at the Department of Licensing and Regulatory Affairs confirmed on August 10 that Voris' nonprofit [corporation] was “no longer registered and in good standing with the State of Michigan.”

As of August 16, St. Michael's Media's website stated: “We are a 501(c)3 company & donations are tax-deductible.” An earlier test donation, made through the website via PayPal, showed that the officially defunct entity was still receiving contributions".

Yes, I fear I must agree with you Father.

Voris is right on many (but by no means all) things, but.... sometimes the way he presents his case is crass, excessively condemnatory, and, above all, *counterproductive*.


I would post that, in order to defeat (or *correct*) the forces of liberalism and moral relativism that have been on the ascendency (both in the church and beyond) over the last however many decades, it is necessary to realise that the proponents of such ideas are not always solely or principally motivated by selfishness (or narcissism); and also that it necessary to realise that the swing towards (extreme) liberalism was in part a reaction against a no less wrong swing towards (extreme) reaction in the 19th century.

Nothing I have seen of Voris's broadcasts suggests that he has considered such matters.

I don't think he's uncatholic either, but do I think he is a force for good within the church? I would have to abstain on that question.

The leadership from the church on all the issues of our day has been so anemic and apologetic that it requires someone to stand up and call a spade a spade. This he does without apology. He at least gives the laity the direct teachings that are so absent.
Love him or hate him I have to admire him.

If the laity heard Catholic teachings in sermons, if we hadn't discarded cultural identifiers, if we thought about the Last Four Things, there wouldn't be a need for a Michael Voris.

Shane, thanks. How disappointing.

Oh, Father Ray… I was amused by your comment that Voris was “just too American”, which I suspect may come from a very deep place in the Blake psyche. The grating accent, the almost pugnacious, aggressive stance, that irritating little whirly-vortexy gesture of his. Television techno-trappings floating on screen in the best infomercial tradition. I find it irritating myself, and I’m an American. Though I remember being absolutely appalled as a child at the crassness and the antics of the 1960s TV preachers, most of them having come from my family’s Southern Baptist tradition.

After witnessing the recent riots in England, the flash mob violence in some US cities, and the breathtakingly rapid abandonment of Christianity throughout Western Europe, I’d say it’s time to de-emphasize some of the deep and rich historical theologizing on the faith and to energetically proclaim the absolute basics, which most young people today are completely ignorant of. Those who most need to hear the message of Christ are no more interested in - or capable of - distinguishing said subtleties than were my blue-painted pagan Celtic ancestors.

Voris is a warrior, fighting on the modern battlefield of the mass media dominated by the enemies of Christ, where we have suffered so many losses. He could lose his personal battle there – God forbid - a victim of hubris or lack of love. Many have. But as far as I can tell (as an E. Orthodox Christian, admittedly), he seems to adhere punctiliously to the “plain vanilla” Roman Catholic faith, the clear exposition of which can be a rarity here in the USA. Certainly many RC young people I know and hear about here seem to lack the absolute basics.

I’m afraid it’s time to say - along with Thomas Aquinas - “it’s straw”, and to get on with the business of prayer and prostration, of repentance and confession and receiving the sacraments. And finding the charity to support those faithful – as long as they ARE truly faithful - who risk all to stand up and take arrows for Christ, even if we don’t like their style.

Excellent comment.
We Brits also criticise the droning tones of some of our clerics who can be just too English- starchy, pompous and opinionated.
Thank you for your thoughts. Picking at celebrities is a national hobby but it does pay to be a little wary.

I'm sure Voris will receive a standing ovation for the message even if the messenger may be a little OTT bless him.

Some have come to his defense: